Story of a… Butcher

As Raul Rubero of Orlando Meats puts it, “I like to say that meat brings people together.”

Know the terminology. “There’s a difference between being a meat cutter and a butcher. A meat cutter is someone literally pulling something out of a box and cutting it up and slapping it into a case. A butcher pulls it off the carcass and does the meat cutting job as well—grinding meat, cutting it, boning-out things, making sausages. I started as a meat cutter, and now I’m a butcher.”

Keeping it local and pure. Rubero, a native of Jacksonville, does whole-animal butchery using ethically treated animals that are “locally sourced, grass-fed or pasture-raised with no hormones and no antibiotics.” He has a beef with vendors that ship meat, sometimes from overseas. “By the time it gets shipped to us, it only has so much of a lifespan. It doesn’t make sense. Why aren’t we supporting local farmers?” 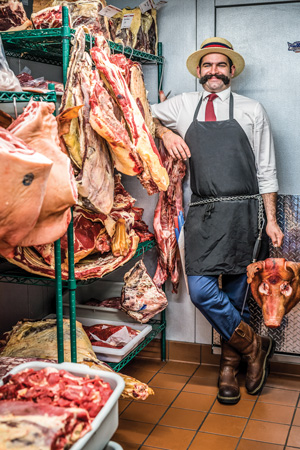 Heads up. “Sometimes on the weekends I put a pig’s head in the meat case. That pig gave its life to feed you. If you can’t look at it, you shouldn’t be eating it.”

Meet your meat counselor. Rubero loves directing his customers to new cuts. “I’m not a huge fan of rib eyes, New York strips or tenderloins.” He advises customers to try something new. His favorites: the petite tender, the teres major, and the velvet steak.

Fat is phat. “People say, ‘I’m paying for all that fat and I’m not going to eat it?’ But you need fat to make it taste good. The fat makes it tender and juicy. If you don’t want a lot of fat on your meat, go to a tire store and start chewing on a tire, because that’s what it’s going to taste like.”

Nutrition vs. flavor. Rubero says grass-fed meats deliver on nutrients such as Omega-3s but are less fatty, which reduces flavor. “I like pasture-raised [a diet that includes other plants and grains] because for you to get a nice, flavorful cut of meat, you need to have fat on that carcass. You’re getting more nutrition with the grass-fed product, but you’re getting a lot more flavor with the pasture-raised product.”

Pork worth its salt. Rubero lets the flavor of his meats speak for itself. “I don’t even season my pork anymore. It has such a natural flavor to it. I can cook it to 135 degrees and eat it medium rare. I just put a fine layer of salt on either side, bring it to room temperature and pan-fry it. It’s the best pork chop I’ve ever had.”

Restaurants don’t cut it. “I have very high standards when it comes to cooking. I rarely go out to a restaurant and order a steak. If I’m going to eat a nice steak, I cook it myself.”

Happy birthday to me. For his upcoming 27th birthday, “I’m going on a hunting trip so I can actually do the whole thing myself”—from killing to butchering and yes, eating the animal.

He’s his own customer. “At the end of the day, I take a steak from here. I go home, cook it, play my jazz music and relax. I’m about to eat the steak that I cut myself. I love my job.”