Story of a… Bus Driver

Florida Operator of the Year and 33-year veteran Melinda Demers says driving a LYNX bus “isn’t as easy as it looks.”

Her driving ambition. “My mom was a school bus driver for 20 years. My dad drove trucks.” Although she wanted to be an accountant, Demers ended up driving a school bus for Orange County Public Schools for four years. “The day they laid me off, LYNX called. I’ve been here ever since.”

On her time off, she hands her husband the keys. Demers drives nine hours and 45 minutes each day and has accumulated 2.5 million miles behind the wheel. “By the last run, I’m done.” 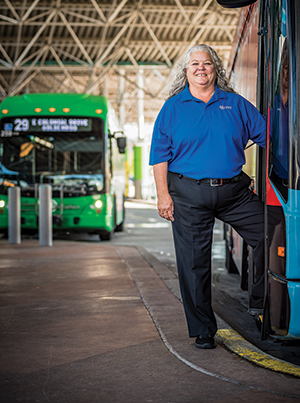 Backseat drivers allowed. Drivers learn routes using printed turn directions called left-right sheets. Demers gets an earful from riders about new drivers who have had trouble learning the route. “If you see a driver having a hard time, help him out. Don’t sit there and bash him. It’s nerve-wracking [to learn the route].”

Dial it down when you’re on the phone. “If people are talking on their phone in a normal voice, that’s fine. But when they get loud, you have to tell them to tone it down. Other people don’t need to hear it, and I don’t need to hear it. Sometimes I just turn on my blower and my fans and drown them out.”

Those late buses. “We know we’re late. We have three clocks in front of us. It’s not like we do it on purpose. People think we’re superheroes sometimes—that we can fly over traffic.”

Be part of the change you want to see. Often the people who complain about the bus being late are the ones who don’t start digging for their change until the bus arrives. “That takes up time. A minute doesn’t seem like much to somebody, but if you have five people doing that, there’s five minutes you’re down just because they weren’t ready to go.”

When you can’t stop to go. “I gave myself kidney stones [years ago] because I didn’t have time to stop [for a bathroom break]. It’s either not having time to stop or not having a place to stop.”

Counseling comes with the fare. Sometimes people will sit behind Demers and use her as a sounding board. “Some people just want to get something off their chest. I feel like a bartender sometimes.”

That time she called police. Years ago an elderly rider wouldn’t pay his fare. When Demers told him he had to, “he fell on the bus floor, acting as if I had pushed him.” Demers called a supervisor, and then the police came. “The police knew him because he’d done it before in grocery stores and on other buses.”

A real card. Demers questioned a woman who asked for a rider discount using a man’s ID card. Demers looked at the card and the woman said, “I got a sex change nine years ago.” So Demers went to her customer relations representative who told her, “Next time ask for her picture ID with it.” “So I did, and they were different names. She was using her husband’s Medicare card.”

It’s a team effort. A mother of three and grandmother of six, Demers says she couldn’t have maintained her career without the help and support of her husband of 38 years. “He’s been a rock.”