Story of a… Boat Tour Guide

With 15 years on Winter Park’s lakes, Dan Lancaster, 77, has seen it all: wildlife fights, stormy weather and a “dead boat.”

Before Lancaster became a skipper/narrator, he’d never helmed a boat. But the owner of the Winter Park Scenic Boat Tour attraction assured the former engineer that was good—he’d have no bad habits to correct. Now, 22,500 excursions later, Lancaster is lead guide, narrating the 12½-mile pontoon boat trip up to 30 times a week during the busy spring season. The tour has operated since 1938.

“When wildlife pops up, anything can happen. I was in a busy part of the tour, trying to share a lot of historical data, when out in the middle of the lake comes an osprey. It balled up like a football, dove into the water amid a bunch of cormorants and came out with a fish. The cormorants scattered. But then a bald eagle showed up to wrestle the fish from the osprey. Then two ospreys chased the eagle. All the while, I felt like a prizefighter announcer calling all these shots.”

The hour-long tour takes up to 18 people out on three of the chain’s seven lakes—Osceola, Maitland and Virginia, which are connected by narrow canals. Lancaster can answer any question about flora or fauna—just don’t ask him who lives in any of the ritzy waterfront homes. “We have a rule that we don’t talk about a home’s current resident. We respect privacy. On a rare occasion, one says it’s OK. Horace Grant of the Orlando Magic didn’t mind us talking about his estate. In fact, he’d come out on his Jet Ski to chat.” 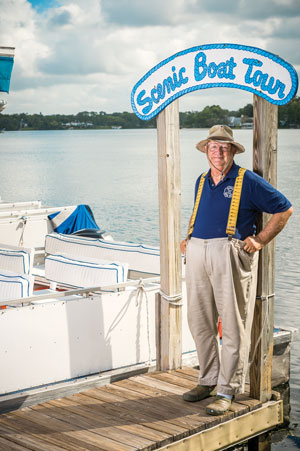 Lancaster enjoys poking fun at himself a lot. “Guests groan at my humor, but it’s all in fun. It’s how I know they’re still with me. For example, I joke that the birds on the buoys are terns, and that they travel in pairs because, as they say, one good ‘tern’ deserves another. They chuckle, and I say, ‘There I go again.’ ”

No tours leave the dock with a storm approaching. Usually the guides have accurate forecasts, but “I have had to race back with a front looming. With weather like that, the water looks angry—very black and ominous. It’s only four feet deep, but it looks like it goes down five miles.”

“When you return to the dock, 99 percent of the time, you get a handshake and a ‘good job.’ That’s a real picker-upper—that lets me know at least I did that one right. When I started, I had no idea if I’d like this job. But it’s the best one I’ve had because of the positive reinforcement every hour on the hour.”

Only one time after a tour did Lancaster receive not a single handshake. “The whole time we were out, I got zero input. I nearly busted a lung to get a reaction. It was just a dead boat. After they left, the tour director said, ‘I should have told you that they don’t speak a word of English.’ Maybe it would have been better if I hadn’t said a thing on that tour, but as it was, afterward, I found that hilarious.”

This article appears in the June 2015 issue of Orlando Magazine.
Categories: People