Story of a… Baker

Mom’s scratch cooking. “My mother, Eulalee Runcie, was involved with the church and when she was 16, she became known as Sister Honey. She grew up in Jamaica in the Montego Bay area, and she made her own wedding cake. We came to upstate New York in 1967 when I was 3.” 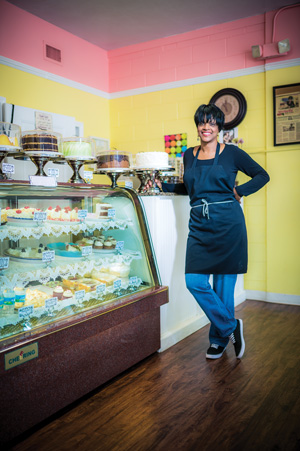 Mother/daughter time. “I remember being 5 or 6 years old when she was cooking constantly—always interested in recipes. We’d be watching the TV and Julia Child all the time, and Mom had The French Chef Cookbook. We’d go through magazines and cookbooks together. She was really what you’d call the old-school cook and baker. She would see an idea, she would not measure anything, and it would come out consistently good. I always had that interest in watching her, and somehow I don’t think it was the food as much as the feeling I would get being with my mother. She passed in 2011.”

Evette married Andy 20 years ago. “Like many people who visit Orlando on vacation, we took the kids and said, ‘Oh, we love it down here!’ And eventually we moved. I had been doing some baking at home, and I’d bake some of the things my mother liked. She was known for her cheesecake; I mean, she was hunted down for her cheesecake!”

Turning point. The 2006 American Pie Council national championship contest changed everything. “We won a blue ribbon with my Orchard-Fresh Apple Pie.” Many awards later, including her 2016 Super Crunch Pecan Pie “Best of Show” prize in the pro category, she’s been featured on the Food Network and shares some of her award-winning recipes in a cookbook, America’s Best Pies.

Open for business. She and Andy opened Sister Honey’s bakery, on Michigan Street near Orange Avenue, in 2012. “Whatever pies I had won prizes for, I started with those. I’d get requests. I struggled a lot with the coconut cake because my mom didn’t make coconut cake. Finally, I had an ‘aha!’ moment. The cake is very coconut-y with coconut custard in between a couple of layers. And it’s the number-one seller of all time.”

Start with the basics. “You can develop a lot of cupcakes building on knowledge. My vanilla cupcake became my cookies and cream cupcake and my double chocolate became peanut butter and chocolate.” Andy, who handles customer service, “makes all my pie crusts, cookies and bars.”

Devotees and the next generation. “Our customers have been so supportive. Now we have people coming from Daytona and Miami. And we have some customers who fly the pies to places like Hawaii and Minnesota. Now we’re going to be doing custom cakes, and my daughter, who’s an artist, will be decorating.”