Story of a… Baby Cuddler

NASA retiree Rick Rapson has gone from tending space shuttles to caring for the weakest among us: preemies.

From Kennedy Space Center to Winnie Palmer Hospital. Toward the end of Rapson’s 25-year career at Cape Canaveral in 2011, “my wife
indicated that when I retired, I couldn’t hang out at home. So I had to find something to do,” he laughs. The mechanical engineer began volunteering at Orlando’s Winnie Palmer Hospital for Women & Babies.

He worked his way to the neonatal intensive care unit. “At the beginning, I was in the triage unit folding laundry, filling gel bottles for ultrasounds, changing beds—things of that nature.” Eventually he earned more than enough volunteer hours to take the 12-hour NICU course that is mandatory to begin working with babies. His timing was good: The waiting list to volunteer is now years long. 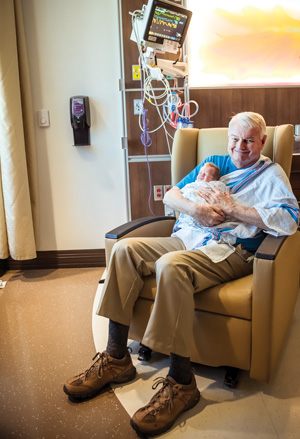 The learning curve. Rapson, a father and grandfather, began caring for babies much smaller and more fragile than at-term newborns, “I was somewhat stressed out. It’s a little spooky in the beginning. It’s a responsibility to take care of these children, but you get used to it.”

All in three days’ work. He serves three seven-to eight-hour days a week, helping with laundry and distributing books to new NICU families in addition to his work with the babies. “They allow the volunteers to feed the children, change diapers and take temperatures. A lot of times if you feed a child, that’s the first half-hour, then probably another half-hour to make sure they’re well and asleep before you put them down in their beds.”

Babies are babies, no matter the size. “They’re looking for love and someone to hold them and talk to them and care about them, even if it’s only for an hour at a time. They’re little people who have a need for human interaction.”

Communication, preemie-style. “These children don’t really verbally communicate, but they do have body language. You learn to read them, and I think they learn to read the person who’s holding them.”

In awe of medical advancement. Rapson, who has a doctorate in mechanical engineering, has gained new respect for medical professionals and science. “I think this experience has given me more of an appreciation for how far medicine has come the past 40 or 50 years and how medical professionals can bring these children along to the point of being viable so they can go home with their families.”

The miracles of development. Preemies have to learn to suck, breathe and swallow while they eat, so Rapson helps the babies pace themselves at first. “At so many weeks of gestation, it’s like a little switch that gets turned on, and they learn to suck, swallow and breathe.”

Talk about attachment issues. “You can’t get too wrapped up with the babies because you know they belong to someone else, and they’re going to go home with that person.”

He’s often invisible to the families. “Usually parents are very concerned with their child, and I’m just a passing flash that helps in little ways. I am one piece of the whole puzzle.”

His message to preemies as they grow up. Rapson’s hope for the children who have been in his care is that they will “do their best at the things they’re exposed to and look at what opportunities they have. You never know where they’re going to end up.”