Story of a… Airboat Captain

For Wayne Corbitt, 38, daily tours on the Everglades headwaters in Kissimmee never get old.

He’s in his natural habitat. “I grew up on these lakes. I learned to swim out here, and I learned to fish out here. I just grew up out here waterskiing and fishing. In my free time, I hunt, fish—stuff like that.”

He learned a lot about Florida animals from his dad. His father autopsied livestock and wild animals at the Kissimmee Animal Disease Diagnostic Laboratory. “I learned from my dad. That helped a lot.’’

His first career was as an equipment operator. He became an airboat captain with Boggy Creek Airboat Rides in 2000 because “it’s a lot more fun. I’d rather be on the water than sitting at a machine.” 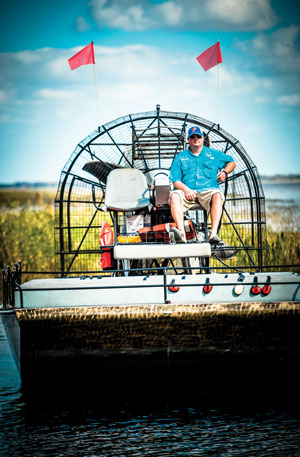 Traffic reports? Who needs ’em? “The way I come to work is by boat. I’m 10 minutes away from the water, so I jump in my little boat and come across the lake.”

It’s never the same. “You can go on a ride and see things differently every single time. There’s about 80 different species of birds out there. We see turtles, snakes, alligators, all kinds of plant life. There’s a lot to see out there.”

He keeps a buffer between passengers and wildlife. “I’ve had people that, when you get too close to a small gator, they may reach down and try to grab one. You can tell when somebody’s going to do something, so you move away. That way they don’t have the opportunity to get bit.”

Gators get a bad rap. “There’s not been a whole lot of attacks on people since the 1950s. Most of the attacks come from people doing crazy things like feeding them that get them [alligators] used to people. We don’t feed the alligators. We give them the respect they deserve.”

Birdwatchers are his favorite passengers. “It’s fun to watch them. You can tell when you find a bird they might have been looking for their whole life, and then we have the opportunity to go show them that bird.”

Speaking of birds… “One day a coot flew in front of the boat and crapped all over everybody. Everybody thought that was the funniest thing they’d ever seen.”

If you like the ride, tip the guide. Thus reads a sign on each boat seat. “You never know what they’re going to give you. I’ve had tips from a dollar to a couple of hundred dollars.”

Despite thousands of tours, he’s avoided skin cancer—so far. “I get checked every six months by the dermatologist. I wear lots of sunscreen. We try to keep ourselves as protected as possible without being too hot.”

He misses the wild Florida of his youth. “Eventually it’s all going to be houses and shopping centers. It’s really going to suck.”

Once an airboat captain… “I’m going to keep doing this till I can’t keep doing it no more.”