Get to Know the Orlando Magic's Aaron Gordon

The fourth overall draft pick in 2014, Orlando Magic’s Aaron Gordon suffered an unfortunate mid-season injury his rookie year. Now he’s back on the court and focusing on the fundamentals of the game in order to help his team score big and help himself stay grounded—but with a 39-plus inch vertical jump, he spends most of his time in the air.

At 20 years old and midway through his second season, Aaron Gordon is one of the youngest players in the NBA. Towering at 6’ 9’’ and covering the position of small forward, Gordon says height runs in his family. He’s part African-American, part Native American and part Caucasian. His great-grandfather on his father’s side was an Osage Indian who stood a whopping seven feet tall.

But with great height comes great responsibility. Gordon gave the Magic a scare midway through last season when he fractured a bone in his left foot. Earlier this year he fractured his jaw. But after missing 32 games and surgery in mid-February, Gordon’s back. And his blend of size, athleticism, strength and improved shooting gives the Magic a real shot this year.

He says his key to success this season is focusing on fine-tuning his fundamentals. “We have a really detail-oriented coach. Finishing around the rim, screening and boxing out—that’s what I’m focusing on right now.” 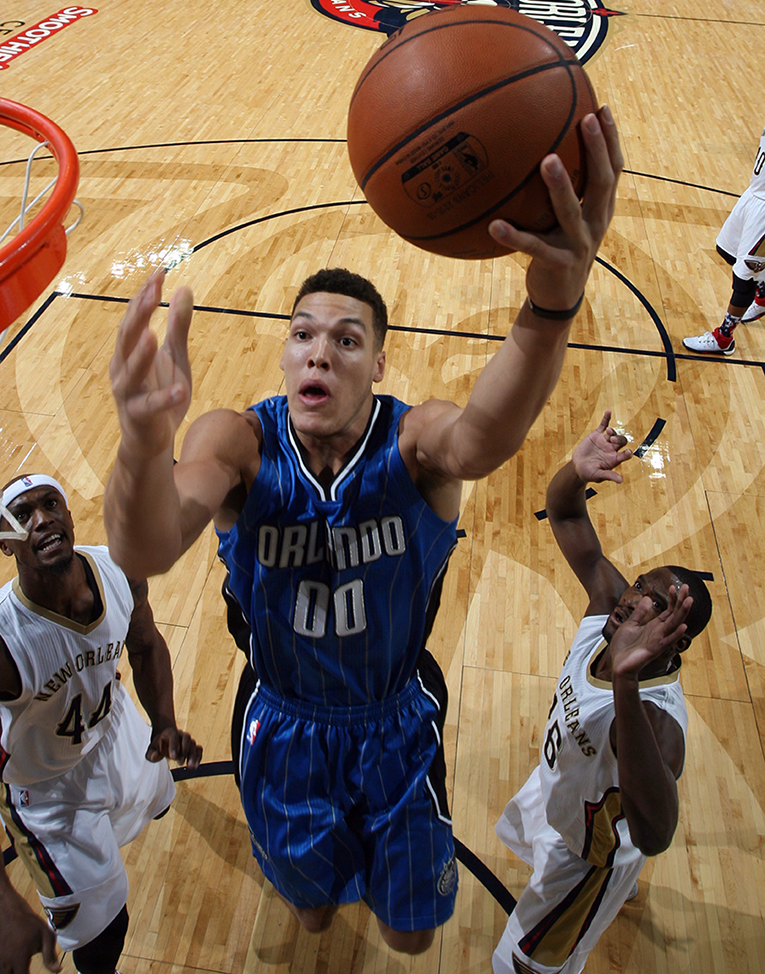 The second-year rookie grew up in San Jose, CA, where his varsity career was highlighted by several Division II championship wins and earning a 2011 FIBA Americas Championship gold medal.

For college he committed to the University of Arizona and was named one of the 30 finalists for the Naismith College Player of the Year, named to the All-Pac-12 first team and earned Pac-12 Freshman of the Year and Pac-12 All-Freshman team honors. After only one year, he declared for the NBA draft, forgoing his final three years of college eligibility.

“When I first got here I didn’t understand what it was like to be a pro,” says Gordon. But, thankfully, he's had a lot of role models in his life. His father, Ed Gordon, was a star of San Diego State basketball and his older brother, Drew, also became a professional basketball player. Not only that, but upon joining the Magic, Gordon found inspiration in playing alongside Tobias Harris, fellow forward who was also drafted early. “Tobias is such a hard worker. He’s a great example for me to follow.”

Gordon says he wasn’t even a little intimidated by his teammates when he first joined. “In order to stand out and succeed in this game, you have to have the right intentions. And these are shown through your actions.” To Gordon, the Magic gives everyone on the team a chance to be heard. There’s no single vocal leader. “Everyone speaks up a little bit. Everyone has a voice.”

Gordon has certainly settled into his role on the team. Like a secret agent, he’s becoming known for his ability to go unnoticed until he suddenly explodes to the rim. He’s even been dubbed 00AG—for his number 00 and his initials AG.

He’s also settled into life in Orlando. “It’s a little bit like California,” Gordon says. “I really like it. I went from living in one place my whole life in California to a dorm in Arizona to this.” Gordon now lays his head in a spacious apartment in downtown Orlando where he likes to blow off late-night steam by taking a run around nearby Lake Eola Park.

“Orlando is an amazing place. It has good mixture of a lot of different cultures and things to do,” he says.

For fun, Gordon finds himself venturing to International Drive to go bowling with his teammates at Kings Orlando, going to Epcot, having dinner at his favorite restaurant, Fogo de Chão, or watching the fireworks at Universal. He loves starting his day with Bikram yoga and tearing around town in his black-on-black Jaguar XJL, which he purchased with money from his close-to-four-million-dollar signing deal. But to Gordon, playing in the NBA has little to do with seven-figure salaries.

“I let my money make itself,” he says. “Instead of spending, I save it and pretend I don’t even have it. Not much has changed. I act like I’m my normal self.”