The KitchenKillaz will gladly cook up a lively musical performance in—where else?—your kitchen. Social media has shown a hearty appetite for the singular experience. 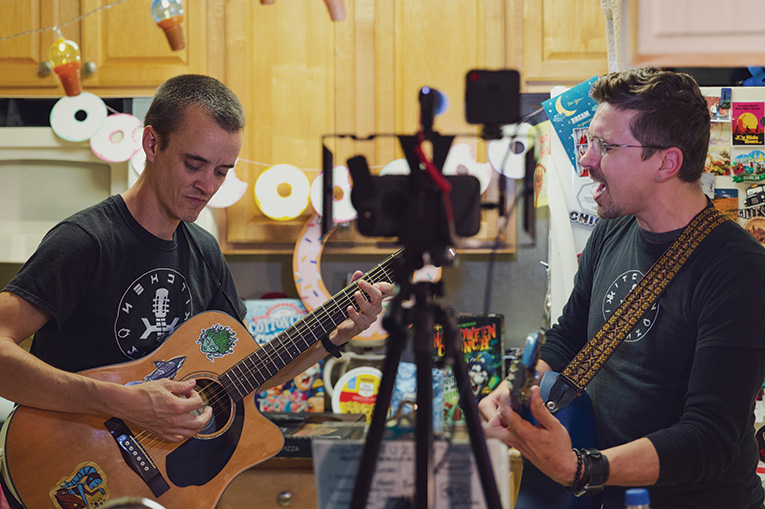 With their musical menu close by, Stephens (left) and Floyd belt out a tune. Social media fans can join in the fun on Facebook. (MARIAH WILD)

“Five minutes, baby!” Billy Floyd calls out to everybody present and nobody in particular. A few enthusiastic “yeahs!” answer but mostly, conversations and preparations carry on.

Floyd, one-half of a truly unique Orlando musical duo, continues the countdown at three minutes, one minute, 30 seconds and…with the touch of a button on his iPhone, the KitchenKillaz are live and streaming to the world via Facebook.

If you’ve always wanted to cook a multicourse dinner for an indeterminate number of guests while literally sharing their kitchen with a musical act, look no further than the KitchenKillaz.

It’s a party! It’s a cooking demonstration! It’s whatever their hosts want it to be, say Floyd, 39, and Killaz co-star Jay Stephens, 38.

Floyd and Stephens, who goes by the name “The Commodore,” have been friends for 13 years and roommates for two. Their concept: Play music in your kitchen for free on a Friday night while you prepare a meal and they entertain your guests and their Facebook fans. If you prefer to party only, the Killaz will bring their own chef. They are happy to supply “critics” (i.e. hungry friends) to expound upon your creations. Heck, if you want to have an artist painting in the background, they’ll bring one of those, too. You are free to laugh, cry or get drunk, but it’s all on camera and it’s all out there forever.

“We’ve had a really great response. And I think the more time we can invest in this, the greater things we can do. We can influence, inspire and motivate,” Floyd says.

The KitchenKillaz stand apart for the concept itself and for embracing social media to the extent that there is no show if there is no Internet connection. Without a template for the enterprise, the guitar duo went live in August 2017, not knowing if there would be anybody on the other side to watch them sing, strum and joke. There was.

“The deal we made with the crowd was that we wouldn’t stop playing until we fell under 20 viewers,” Floyd recalls. “That took 2½ hours.” After that success, they went live again the following Friday, and a friend who was on that feed remarked to Floyd that they were “killing it” in the kitchen.

“I liked the alliteration’’ of kitchen killers, Floyd recalls. “I thought that was really cool. So I said ‘let’s see what we can do with this.’”

A little Googling showed the name “KitchenKillaz” was untouched. “Everything was available: dot-com, Instagram, Twitter, Facebook, everything,” Floyd says. Today, over 300 Internet shows in, the KitchenKillaz have gained traction in both the terrestrial and online worlds. By early February, every Friday through July had been booked.

The duo’s music can best be described as contemporary acoustic alternative. Regulars know the lyrics and sing along, creating a lively yet intimate performance. And while the Friday kitchen-crashing shows will always be free, there is a practical need to fund the fun. To that end, the pair have embraced sponsorships and crowd-funding. As DIY artists, they also put out a tip jar at performances and sell a wide range of merchandise.

Floyd, a longtime Central Florida musician, is the director of information technology for a Winter Garden company. Stephens is the lead receiver at Second Harvest Food Bank of Central Florida, where he loads and unloads trucks and coordinates their movement. They are the faces and voices of KitchenKillaz, but they do not roam the Internet alone. Dennis Cutter, 44, aka “The Mad Scientist,” a psychiatric nurse practitioner in Lake County, is traveling chef for the Killaz (his cooking leans toward Cajun); Shelly Wheeler, 42, who handles video, social media, transport and merchandising, works seasonally in special events at Universal Resort Orlando. And Jen Hogan, 52, is in charge of press and promotions.

Floyd, Stephens and Wheeler are housemates in a quiet neighborhood northeast of Orlando International Airport, where together they spend about 150 hours a week on the project. From a wooden dinette, Floyd and Stephens switch on at 7:05 p.m. every Monday and Wednesday for Facebook Live shows in which they play their original music, promote local businesspeople, wrap up the previous week and tease the Friday extravaganza. Every Tuesday, the Killaz ask their fans to vote online for the songs they’d like the duo to perform on the Wednesday show. Weekends find the team at local events and pop-up shows. 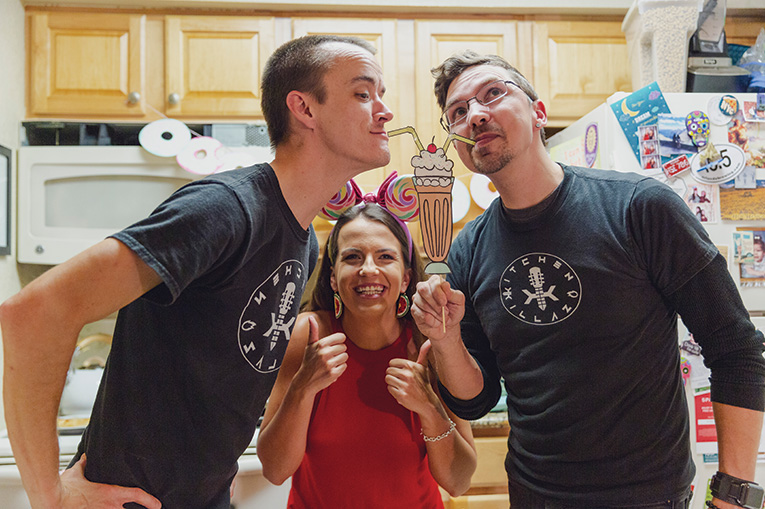 Stephens and Floyd ham it up with Kayla O’Brien and others in her Winter Park kitchen. (MARIAH WILD)

With their hands in everything at once, it’s not surprising that they connect with other creative types and there’s a lot of cross-pollinating going on: The Killaz promote you and you promote the Killaz. A prime example occurred on a recent evening in Winter Park. Guest chef Kayla O’Brien has a solid background in video journalism but her niche is exploring desserts and candy through her YouTube show “Sweet Seekers.” O’Brien promoted the KitchenKillaz’ show through her own extensive social-media presence, bringing in viewers who hadn’t yet heard of the band.

She’s also the videographer for daily Orlando email newsletter “Pulptown” and is always looking for a story to tell. So when she heard about Floyd and Stephens through a friend, “I wanted to do a story about them for ‘Pulptown.’ I thought they were really cool guys and I wanted to sign up for a show,’’ she explains.

On the evening the Killaz performed in O’Brien’s kitchen, the emphasis wasn’t quite so much on the food, which had come fully formed from a grocery store. Rather, the vibe centered on the silly repartee and the mutual respect that brought them together. And the Internet loved it. Viewership rose as pizzas baked.

This time the virtual audience outnumbered the flesh-and-blood crowd but the opposite occurred the week before at a show in the Killaz’ own kitchen. Guest chef Rebecca Morales put together a menu of pork tenderloin medallions, roasted Brussels sprouts and caramelized apples. Being Morales’ third time cooking for the show, the word must have gotten out regarding her expertise. The house was packed.

The Lake Mary resident is typical of fans who take that brave step, going from viewer to participant. Morales, who works for a human resources and payroll company, met Floyd and Stephens through a mutual friend and developed a bond with the duo.

Anybody and everybody is welcome to open their kitchens to the traveling show. To date, the Killaz have visited the kitchens of actual chefs as well as those of attorneys, accountants, teachers, business executives, theme park workers and a long list of other everyday folk.

“The first time on camera is a little weird, but it’s a lot like FaceTiming someone,” Morales says. “If anything, I think the nerves are more about whether I have food to show at the end.’’

There is no script and there is nothing keeping guests from jumping in front of the camera for a little improv and viewers from critiquing the show.

“The interaction in the community is so cool. It’s like we have a family reunion three times a week,” Floyd says, adding: “For that one hour just party with us and sing with us and have a good time.”

This article appears in the March 2020 issue of Orlando Magazine.
Categories: News and Features
Tags: duo, kitchen, media, music, musical, social
Want to read the whole issue? Download and read this issue and others on Magzter.

The Best Summer Colognes in 2023

The Best Long-lasting Perfumes for Men