Rookie activists and fast friends Eugenia Sefcik and Lynn Long work to protect Lake Eola Park from falling into the shadows of development. 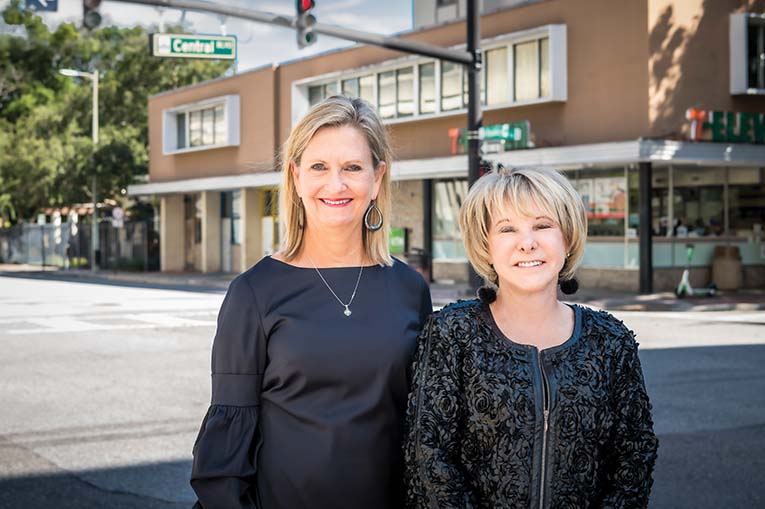 Until fairly recently, Eugenia Sefcik and Lynn Long never imagined themselves as civic activists. They had only a nebulous notion of the meaning of a land trust. They didn’t even know one another. But that all changed in 2015 with the preliminary approval of a 28-story mixed-use development at the southwest corner of their beloved Lake Eola Park.

“Back in 2015, when I saw this proposed building for the corner, I knew I had to do something,” recalls Sefcik, who was friends with Long’s cousin. The cousin knew Long was also up in arms about the proposed development and suggested they connect.

“More than two million visitors come to Lake Eola Park every year,” Sefcik adds. “Based on square acreage, it outpaces visitors to the San Antonio River Walk and the National Mall in Washington, D.C.”

Sefcik reached out to Long, not knowing what a formidable force their friendship would become. They didn’t know their friendship would result in the formation of the Orlando Land Trust, a nonprofit designed to protect and improve Orlando’s green space. They didn’t know the effort to protect and expand the park would become a full-time job. And they didn’t know their efforts would win the support of some of Orlando’s heaviest hitters, people like former Orlando mayors Bill Frederick and Glenda Hood, Orlando philanthropist Ted Haddock, Mayor Buddy Dyer and Orlando City Commissioner Patty Sheehan.

“I never envisioned myself being an environmentalist … or being involved in something like this,” admits Sefcik, who manages rental properties and co-owns Employment Technologies with her husband in Winter Park. Long, a retired therapist who was a department chair at Stetson University, imagined traveling, spending time with her grandchildren and playing bridge during what many call the golden years.

The pair found they had much in common. Both had grown up in Orlando, both are grandchildren of downtown Orlando entrepreneurs—Sefcik’s grandfather started Eola Coffee Company, and Long is a board member of Thomas Lumber, started by her grandfather in 1925—and Lake Eola has been central to their memories. “We were down here all the time. I brought my kids to feed the ducks and play on the playground. I remember when I was probably in high school, there was a beautiful rose garden in Lake Eola Park. I remember having my picture taken in front of the rose garden,” Sefcik recalls. Long, who brings her grandchildren to the park, remembers walking there after school and attending annual fish-a-thons. 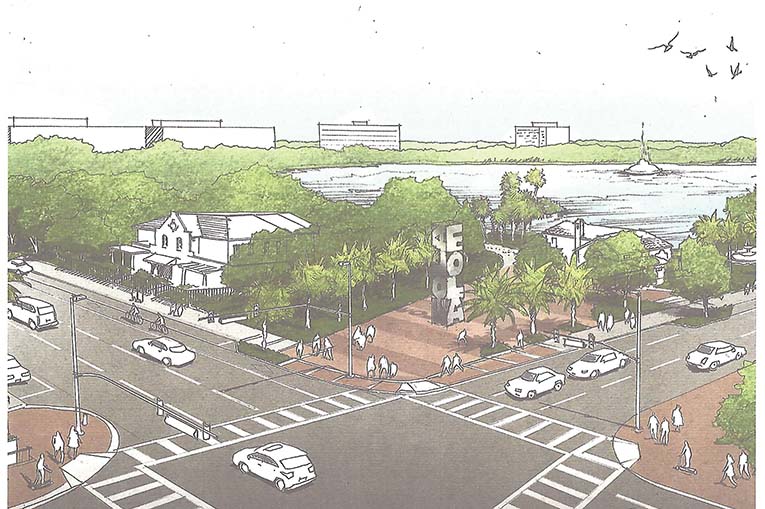 Plans will transform the intersection of Rosalind and Central, where a 7-Eleven now stands, into an entrance to Lake Eola Park. (ORLANDO LAND TRUST)

But neither woman was intimately familiar with the mechanics of city government. “I was sort of a protester in the ‘60s. I had a little bit of skill with how to hold a sign,” Long laughs. Sefcik’s community experience involved working with inner-city youth.

“Neither of us is a know-it-all type of person. We know when we don’t know something, and we know when we need to find someone who does,” Long says. They began reaching out to city officials, going before the city’s Municipal Planning Board to oppose the project based on height. As they left the meeting they thought, ‘We need to do something that’s going to be permanent, that could be the legacy for Orlando,’” says Long. Soon after, with Haddock’s help, Orlando Land Trust was born, and they had lined up a team of pro bono supporters—everyone from an architect to a web designer—to help them along the way.

“Our first capital campaign was to figure out a way to purchase the property on the corner of Rosalind and Central and donate it to the City of Orlando as park space with a deed restriction that it must remain park space in perpetuity,” Long says. They knew Robert Murrell, who owns the proposed development site where a 7-Eleven now sits, had been offered $5 million for the property.

“We told him, ‘Robert, we would like to be part of something bigger, and you’re the key to it. We don’t want you to sell that land to the developer. We want the land to become park space, and we are interested in purchasing your property,” says Long. Murrell agreed to sell it to them for $3 million, even though the ladies had no idea how they would pay for it. Still, they managed not only to raise the down payment but, as of this writing, about 90 percent of the total $3.5 million needed with the help of matching funds from The Trust for Public Land.

“My dad and grandfather built that building [on the southwest corner of Lake Eola] in 1959,” Murrell says. “I grew up here. My dad’s parents lived down the street. My great-grandmother lived on Amelia. We used to walk over to Lake Eola when I was baby and go there to play all the time.” He says he believes his late family members would be “proud” and “excited” at the prospect of the site being converted into an entryway to the park. As for Sefcik and Long, Murrell says, “I was amazed at how these two ladies … just get it done. They’re awesome.”

Mayor Dyer also has high praise for the women who approached him with a novel plan. “They came to us and said basically, ‘Hey, we’re going to raise the money to buy the lot and building, and then we’re going to gift it to the City of Orlando. How would you like that?’ It’s like, that’s fantastic. How could I not like that?” Dyer says. “They were the first ones to bring a problem related to the park, recognize the problem and bring a solution.”

Commissioner Sheehan donated $50,000, half of her discretionary funds, to help the women meet their goal. “I think they are too modest when they refer to themselves as ‘just two [little old] ladies,’ ” Sheehan says. “These two powerful women reached out to The Trust for Public Land, educated themselves on the financing process, and immediately put together partners like Ted Haddock to help them. Then they put together a who’s who of Orlando movers and shakers, including all of the former mayors, to help out.” Despite setbacks from COVID-19, which temporarily brought fundraising to a halt, Sheehan says, “I know these amazing women will accomplish anything they set their minds to.”

The pandemic has steeled their determination to see the project through. “If you look at all the studies that are emerging from COVID, park space has become even more important,” Long says. “Lake Eola is even more important than it was when we started this project, in my opinion.”

To fill the gap, Sefcik and Long recently unrolled a new funding initiative, A Grandmother’s Legacy of Love, to help them meet their March 31, 2021, deadline. “We’re going to ask for donations from grandmothers honoring and recognizing their grandchildren so their grandchildren’s names will be in the park in a special section. Each child will receive a certificate suitable for framing,” says Long. This project hits close to home.

“When I first started on this project, I talked to my grandchildren about it. They each donated $5 out of their piggy banks. It makes me cry to think about it now, because this is for them. This is their future. This is their city,” Long says through tears.

Despite their commitment to preserving and expanding green space, “we’re absolutely pro-development in downtown Orlando,” Sefcik insists. But with green space diminishing, they want the park preserved and expanded. “We feel like Lake Eola Park ought to be similar to Central Park in New York City,” she says.

Buying and donating the southwest corner to the city is only the first step. “Phase 2 is creating even more [green] space there,” says Long, who wants to see “all four corners secured. We have a broader mission of a healthier lifestyle for Orlando.”

The past five years have given the pair a legacy that will outlive them, as well as a friendship that seems destined to endure. “The two of us have become advocates for one another,” Sefcik shares. “I actually talk to Lynn more than I talk to my husband on a daily basis. He even said at one point, ‘Lynn needs to get a room in our house.’ ”