Residents open their houses—and backyards—to independent musicians, creating a concert atmosphere like no other.

The Caroline Aiken Band—a celebrated folk group from Athens, Ga.—played only a few feet from their audience, who listened intently to every strum, every beat and every word.

The intimate location for this concert: Mark Fodor’s living room, where dining room chairs and a cream-colored sectional couch sat an audience of 20 on a cold, rainy Sunday in January. Fodor’s big gray dog, Rambo, mingled with the crowd, nuzzling the occasional tapping foot.

“It lets you get down and dirty with the audience,” Aiken says of the home concerts she regularly mixes into her music tours. “It’s much more honest. No bells and whistles.” 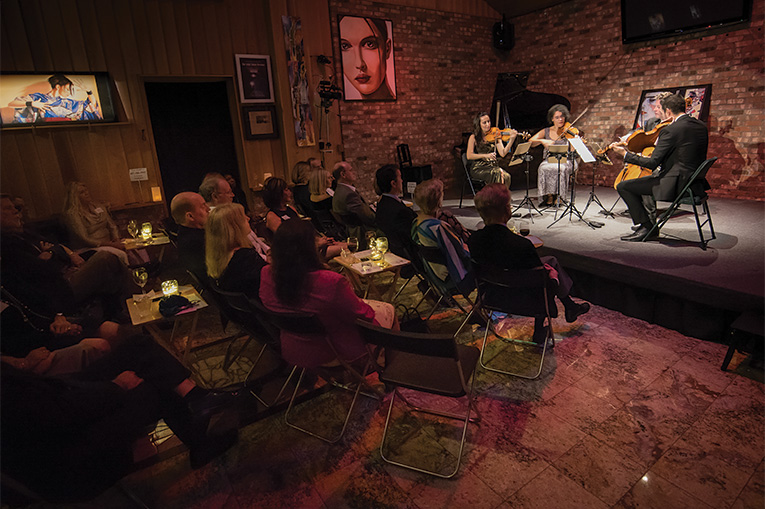 Such house concerts pop up regularly in Orlando, creating an intimate alternative to clubs and venues for live music lovers and serving as added income and exposure for touring, lesser-known artists. Audiences are typically known in some way by the host and might range from 15 to 100 people. Generally, no special licensing is required  and there’s no charge, only suggested donations that go directly to the artists.

House concerts help many independent acts thrive because “it’s so expensive to tour and build a following. You can’t make money from CDs anymore,” says Fran Snyder, founder of Listening Room Network, a St. Petersburg organization that helps connect artists with hosts. He says LRN has around 150 hosts statewide.

Fodor has taken the house concert concept a few steps further—out to his backyard. What started as a live band performing at his three-bedroom, East Orlando home for his 50th birthday in 2003 has turned into him hosting a dozen music acts each year since, with artists performing on a covered, showlight-lined stage he and fellow music lovers built in his backyard (the show is moved indoors in case of rain). He named the venue Fodor’s Grove, and trees, bushes and a low brick wall keep it concealed from the outside world. 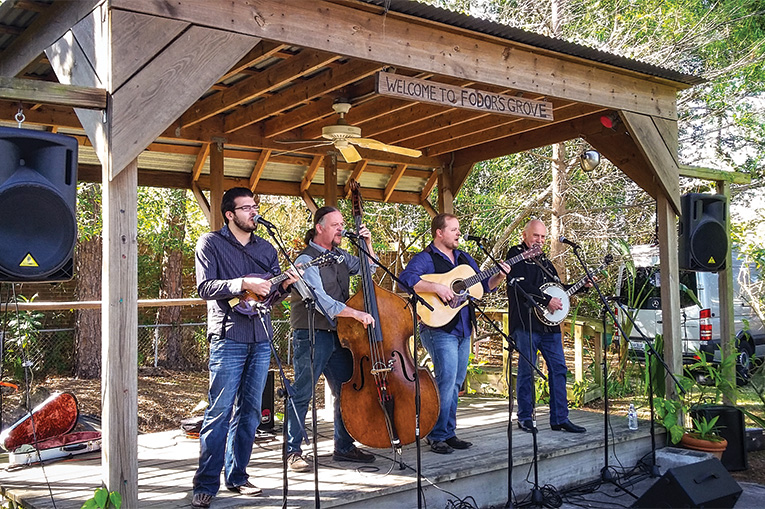 Benoit Glazer, co-founder of Timucua Arts Foundation, says house concerts started gaining traction in the area when he and his family began hosting them out of their Hunter’s Creek home nearly two decades ago.

“That sort of whet people’s appetite for more and then the energy kind of grew,” says Glazer, whose concerts became so popular he built the Timucua White House, a three-story performance center, recording studio and home to his family of five in south Orlando across from Boone High School. The venue hosts 100 events a year and attracts international acts, ranging from classical to jazz.

“We directly inspired people to create venues and have concerts in their homes,’’ says Glazer, the former musical director of Cirque du Soleil’s La Nouba. “That’s what we wanted all along. That’s what we were hoping for,” Glazer says.

Nanci Lang and her boyfriend, Nathan Vadeboncoeur, wanted to host house concerts to share the New Orleans culture and music they love with their Orlando community. During regular trips to the Crescent City, the couple introduce themselves to artists they like and offer their home for concerts if a tour is coming through Orlando.

“I want to continue to go see live music, and it can be a dying art if you’re not a big-name artist,” Lang says.

Orlando singer-songwriter Beth McKee can fund an entire 10-day tour just by playing a few house concerts. Donations from guests usually range from $10 to $30, and the merchandise that attendees typically buy far exceeds her sales when she plays bars and clubs.

“In most scenarios, the reason the venues bring musicians in is so they can make money off the bar and food,” says McKee. “House concerts are a great way to make ends meet and not have to go play some five-hour gig and try to convince people to get drunk.”

Lang says it was difficult to get her friends to attend her house concerts at first.

“People think, ‘You want me to come to your house and pay money for what?’ Now people say the best shows they’ve ever been to were at our house,” she says, adding that two of her friends have gone on to host their own house concerts.

Over the years, the couple have built a base so they can customize their guest list to the size of the band, ensuring each performer earns a decent wage. They hosts several concerts a year, providing room and board to the artists in their three-bedroom home in Lake Buena Vista.

“We try to accommodate what the band needs. We’ll serve a little buffet for the guests for added value,’’ Lang says. She’s planning a crayfish boil for an upcoming Sunday show. 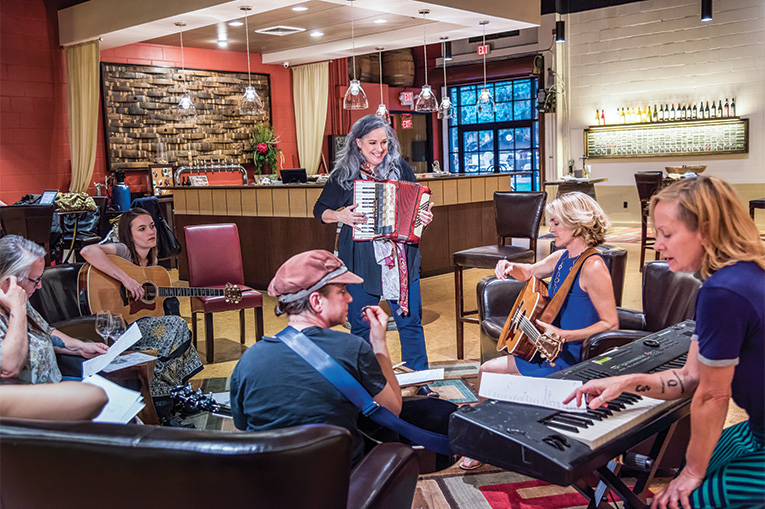 Fodor’s Grove gets about 50 requests from folk, acoustic, bluegrass, blues and jazz artists to play there annually, but lately he has had a difficult time attracting a healthy number of attendees. Fodor used to get 40 to 50 people but now averages only 15 to 25. He’s planning to cut back to only a few shows a year if attendance doesn’t improve.

“In some ways I feel like it’s an insult to the people playing who traveled here,” says Fodor. “When only 15 people show up, I feel like I’ve failed.”

Fodor switched his events to Sundays so that touring acts could save their Friday and Saturday nights for bigger gigs. Snyder says that’s common among concert hosts. “House concerts don’t have to be big to be meaningful,” he says.

Some house concert hosts are musicians themselves. Terri Binion, an Orlando singer/songwriter, says she started hosting them after being invited to play at several herself. She stopped hosting when she moved to another location but fondly remembers feeling musical vibrations rumble through her home and seeing the neighbors’ children scooched close to the musicians, watching them with wide eyes.

Fodor, a floor installation contractor, isn’t a musician but as a boy, his father always took him to live shows.

“I’ll sit back when the music starts and think, ‘this is awesome,’ ” he says of Fodor’s Grove shows. “I like not having to go anywhere and I’ve gotten to meet a lot of great people.”

Hosts don’t profit from house concerts but rather spend time and money to create an optimal listening environment for their guests. Binion would move all her living room furniture before a concert, replacing it with large floor cushions for seating, and hang string lights for ambiance. Lang says she and Vadeboncoeur purchased their home for the spacious living room, where bands can play and guests have room to boogie.

Fodor spends a lot of time manicuring his lawn and even purchased eight rows of gymnasium-style bleachers for the audience. He also turns a few concerts a year into benefits for various causes, including pet rescues and foundations for multiple sclerosis, a disease his daughter has.

Although rain forced the Caroline Aiken concert indoors, June Davis says she and her husband, Elby, loved the environment. They miss the live folk music that’s commonly found in their native Philadelphia.

“It takes a very generous person to open their home like that,” she says. “It’s comfy, cozy and it comes with dogs.”