TJ Dawe devises his own offbeat theater roles—and helps other performers develop theirs.

You’d think that TJ Dawe would have run out of stories by now. Nobody would blame the master of the mile-a-minute monologue for just recycling his greatest hits, from the one about being a barkeep at a British holiday camp to a group-therapy retreat enhanced with an indigenous psychotropic brew.

But the loquacious Canadian, a 20-year Fringe-circuit veteran and the author of 15 one-man shows, has a new yarn he’ll debut at the Orlando International Fringe Theatre Festival, which will bring better than 100 productions to Loch Haven Park and other nearby venues from May 14-27.

It’s called Operatic Panic Attack, which Dawe describes as “an autobiographical monologue about being a theater student in college and not doing very well, being a virgin in college and not doing very well at that, working as an extra in a couple of operas, discovering the wonder of opera, how music affected my life and development, a fling I had with a chorus member in one of the operas that led to a spectacular panic attack, and how all these things combined to send me in a very certain direction at the end of my theater studies.” 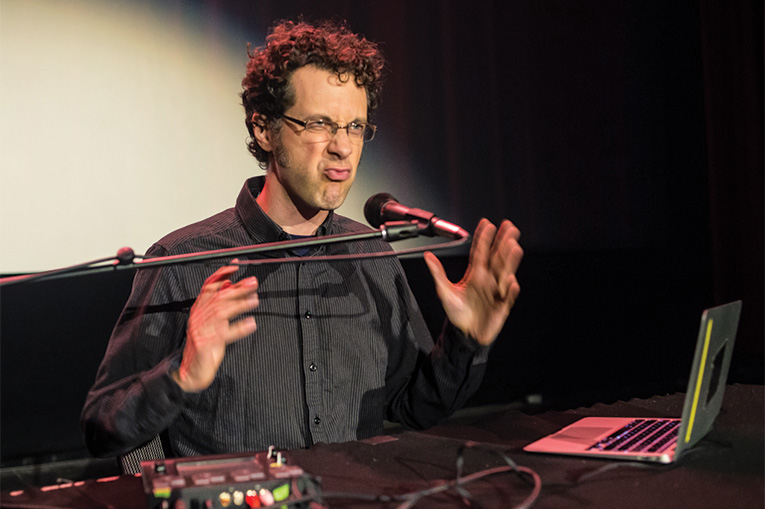 That “very certain direction” pointed him straight toward the Fringe circuit. “I knew as a theater student that I just wasn’t really going along with the program,” he explains in a telephone interview. “I felt a little guilty about it at first. I didn’t dream of doing great roles. I didn’t want to read somebody else’s lines. I wanted to write my own.”

Though he may not have been leading-man material in drama school, as a Fringe artist Dawe is a revenge-of-the-nerds poster boy: gangly and obsessive, frizzy-haired and funny, an artful, self-deprecating introvert who not only discovered his tribe but has become one of its gurus.

Apart from his own one-man shows, which he memorizes on long walks near the Vancouver home he shares with his wife, folk singer Lindsay Robertson, he teaches a monologue class at a Canadian college and acts as a producer, director and dramaturg for other Fringe performers. In fact, three of his proteges have shows at this year’s Orlando Fringe: Charles Ross, Rodney Decroo and Tim Murphy.

Ross, who was a classmate of Dawe’s in his drama school days, worked with him to develop one of the most successful and long-running Fringe shows ever created: his one-man Star Wars tribute show.

Decroo, a Canadian poet and singer-songwriter, met Dawe for lunch one day and wound up breaking into the Fringe circuit after working with him to develop Didn’t Hurt, a remembrance of his troubled relationship with his Vietnam veteran father.

Murphy will be presenting Blind to Happiness, which revolves around a dishwasher and several of his co-workers, each engaged in the elusive quest to find happiness. He’d been performing and polishing the sketch for years when he began working with Dawe to refine it.

“It was his guided questions that helped me,” says Murphy. “TJ planted a lot of seeds for me.”

Dawe is a prime example of the intensely collaborative spirit that prevails among the circuit’s high-end solo performers—and the difference between being self-absorbed and self-aware.

He credits much of his success as a solo performer and coach to his involvement with the International Enneagram Association, which is devoted to communication based on discovering which of nine personality types you are—and how to see things through the eyes of the other eight. “It’s like learning another language,” says Dawe.

He seems to be making a pretty good run at that, judging from a monologue he once performed envisioning what kind of restaurant that women would patronize if some insightful entrepreneur decided to create the equivalent of Hooters for females. After doing an informal survey of women he knew, he came up with a plan for a chain of establishments whose male waiters would talk softly to them, clean up after themselves, hide affectionate little notes at the table, give their customers back rubs on request, surprise them with chocolates—and eat some, too, so they won’t feel so guilty.

For schedules and information on performance tickets, Visual Fringe, Kids Fringe and acts on the outdoor stage, go to orlandofringe.org

We recommend some noteworthy new shows and a returning classic.
By Michael McLeod

Eye Candy
Stephanie Morin-Robert
The performer who pulled no punches with her previous show, Blindside, about living with only one eye because of childhood cancer, is equally forthright with this monologue that ties together parenting a daughter herself with the four generations of sexual abuse in her family. “They are against me writing this show,” she says. “But I’m moving forward with it anyway because it’s their silence that contributes to making us all victims.”

Are You Lovin’ It?
Theatre Group Gumbo
One of two Japanese troupes at this year’s festival presents something that resembles a surrealistic dream you might have following a trip abroad, featuring a goofy businessman and the biggest order of french fries—with legs, yet—you’ve ever seen.

Space Hippo
Mochinosha
This is from the other Japanese troupe, and we can’t resist giving it a plug, too. Who wouldn’t want to see a musical puppet show about a hippopotamus that is set adrift through space and becomes a sort of deity-savior? What’s weirder still is that NASA astronomers recently discovered an asteroid shaped like a hippo, complete with rocky outcrops that look like ears. No, seriously.

The Waffle House Daze
Trish Parry
A New Yorker reminisces about hash browns, other comfort food and Southern living on the drugged-out, late-night side.

You Belong Here
Martin Dockery
This monologue is loosely based—the emphasis here, as always with this stream-of-consciousness Fringe veteran, is on “loosely”—on a trip Dockery and his pregnant wife took to China as their last fling together before the birth of their first child. He performed the show earlier this year, to complimentary reviews, at Orlando Winter Fringe while his wife was in New York City delivering their baby, Elliadora.

Six Guitars
Chase Padgett
We’re including this among our recommendations not only because Padgett, a former Orlando resident who now lives in Canada, delivers such a Fringe-hall-of-fame classic with this one-man evocation of six guitarists of distinctly different styles. It’s also an excuse to clue you in on his upcoming Fringe-hall-of-fame wedding to his fiancée, Christina Garies, which will be presented as part of the Edmonton Fringe Festival on Aug. 23 as a show, Chase Padgett Gets Married, with an audience of paying customers and entertainment by his fellow Fringe performers in lieu of gifts to the happy couple.