In the spring of ’53, future stars were making their mark in Winter Park—as were a couple of new kids on the block.

During the years 1953-55, Winter Park’s Little League produced a player named Jackie Billingham, who went on to pitch for the Cincinnati Reds and compiled one of the best World Series records in history. Another boy named Davey Johnson went on to play for the Baltimore Orioles and later managed the New York Mets to a World Series championship. Ronnie Cayll would have made it to the bigs but quit while establishing a winning record in Triple-A because he hated airplane travel.

Then there was Beaner Howden. . . and my brother, and me.

In the spring of 1953 our family had just moved to Winter Park. I was 10 years old and we lived in a house on Virginia Court, a little street sloping down to Lake Virginia from Fairbanks Avenue. It was an amazing place to be a child. Dinky Dock was just down the way, Winter Park Elementary a few blocks up on Park Avenue, near the Colony Theater (where I saw Shane for 25 cents) and O’Brien’s Drug Store with its legendary cherry Cokes. The Dinky Railroad Line ran right along Lake Virginia, and Rollins College shut down during the summer in those days, so the campus provided a magnificent playground. There was even an old intramural gym that was easy to sneak into to play basketball. But it was baseball, not basketball, that we really loved. 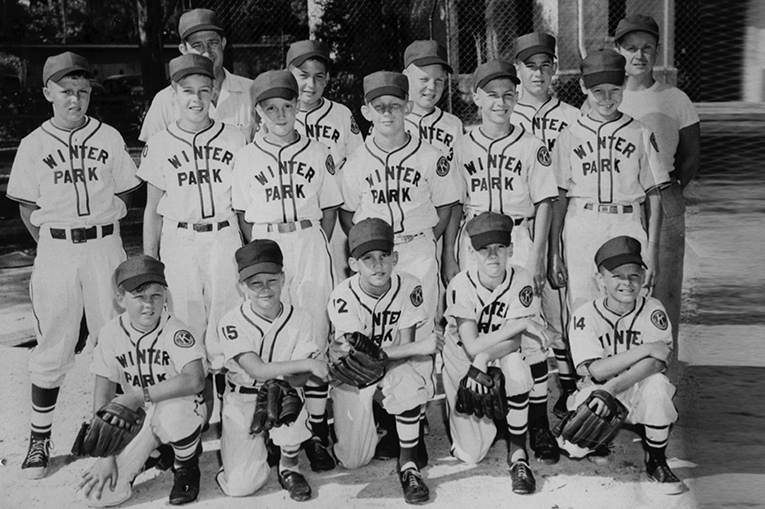 I was the youngest of five boys, and baseball was part of our family fabric. I had been catching my 12-year-old brother Jim’s fastballs for as long as I could remember, and that’s what I was doing one day soon after arriving in town when the mailman stopped and watched us throw a few. He walked over to the house, and in a few minutes Mom was standing on the porch announcing that we could go out to the Little League park that afternoon if we wanted to. The mailman arranged for Jackie Billingham’s mom to come by and pick us up.

The Winter Park Little League had already begun its ‘53 season, but Al Hooper (the mailman and vice president of the league) had arranged for us to play. The park had four diamonds, real wood fences, grandstands and a refreshment stand. Ray Green, a former mayor, had donated the land to the city, and Bill Cross Sr., who became president of the league, had turned it into an actual baseball park.

When we arrived that first day, Mr. Hooper went over to consult with Mr. Kinney, coach of the Indians, the perennial last-place team we would soon discover.

As soon as they had finished their discussion, Jim and I were surrounded by two teams, about 30 kids, dressed in team uniforms, ready for a game. And none of them seemed at all glad to see us.

Mr. Kinney said to the assembled mob something like, “This is Jimmy and Neil. They just moved here from Georgia and they’re going to play for the Indians.” He handed Jim a ball so we could show our stuff to the other kids, and I was terrified. But I walked off the distance that I had walked a thousand times before in preparation for catching my big brother’s fastballs. And over the next few moments, aside from one meek comment about throwing too “sidearmed,” there was a silence that, given the audience, seemed like thunderous approval.

Jim and I played for the Indians the rest of that season. Since we had joined the team late, however, Jim wasn’t allowed to pitch, which, we discovered, annoyed Mr. Kinney to distraction. We played infield; but even with a Haldeman infield the Indians couldn’t get out of the cellar.

One day when we were again losing badly, Mr. Kinney walked out onto the field in mid-inning, forfeited the game, and announced that he wanted to have Jimmy Haldeman pitch against one batter, Beaner Howden, the best hitter for the other team. Just one at-bat.

I watched from third base in amazement. This kind of thing was not supposed to happen, and I’m sure it wouldn’t have if Al Hooper had been there. Mr. Kinney was just tired of losing, and he had reached some kind of breaking point. He handed Jim the ball, and Beaner stepped up to the plate. Today, Jim recalls that he felt pretty comfortable that day. He had seen Beaner hit against Ronnie Cayll many times, and knew that Beaner could hit a fastball out of the park.

Jim worked the count to two strikes, with curveballs, and then decided to throw a pitch that our dad had taught him, a change-up. A change-up in Little League was an oddity, because most of the pitchers were pretty slow anyway. And Jim says a change-up was difficult with small hands because it was a two-fingers pitch.  But a change-up it was. And, indeed, Beaner was surprised, and was only able to hit a meager grounder back to the mound. 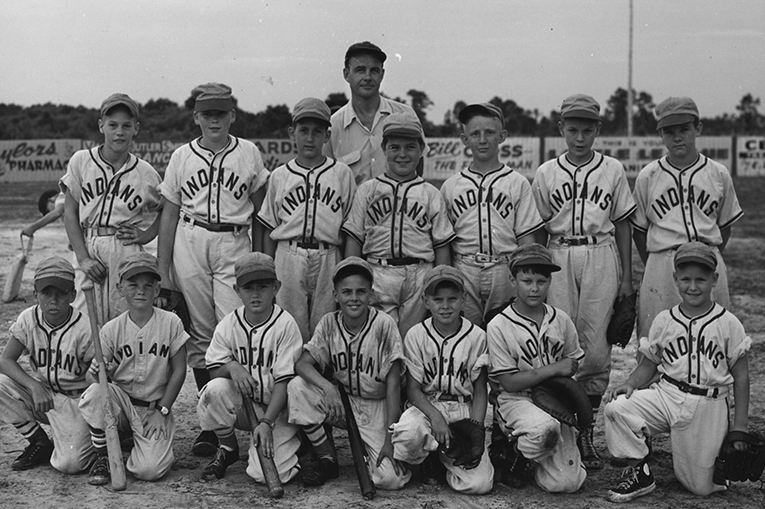 So it was made clear that day—or at least Mr. Kinney thought it was— that if Jimmy Haldeman had been allowed to pitch for the Indians that year, they would have finally had a winning season.

Jim and I have reminisced about that event for 65 years, and still don’t know if Jackie, Davey or Ronnie happened to catch any of it. But I’m proud to have shared the diamond with those soon-to-be stars, as well as my Indians teammates, and I still think Winter Park is the best place I’ve ever lived. Its progress over the years admittedly has dealt me a few blows: Rollins swallowed up Virginia Court and built tennis courts where our house used to be. The Dinky Railroad got ripped up. The Colony Theater became a mall and later a Pottery Barn. Winter Park Elementary was torn down. O’Brien’s Drug Store faded into history.

However, there is a baseball god: The Winter Park Little League fields (now part of Ward Park) are still there. I’m pretty sure they’ll never again produce as many future pros—or as many memorable times—as they did in the Haldeman era. But I like it that way.

Neil Haldeman, a 1961 graduate of Winter Park High School, lives in Ann Arbor, Michigan. He has a BA in English Literature from the University of Michigan, where he worked for 30 years in information technology before retiring.