A historical hotel and plenty of outdoor adventures make this often overlooked part of the country worth exploring. 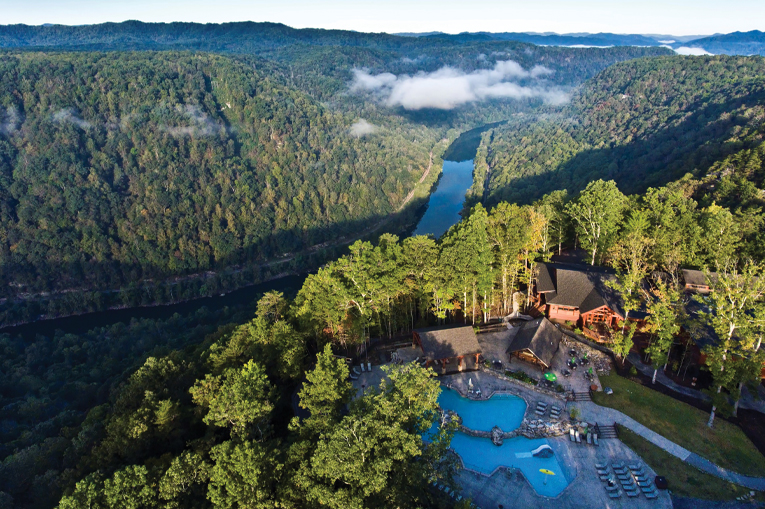 Adventures on the Gorge has an ideal location overlooking the New River, and great ways to explore it. COURTESY ADVENTURES ON THE GORGE

Southern West Virginia packs a lot of punch into a small area. This corner of the Mountain State is home to one of America’s oldest resorts, our newest national park, and charming small towns that hold tasty surprises. Fly into Charleston or Lewisburg and rent a car to make the most of it.

The Old: The Greenbrier

Resorts don’t get much more storied than The Greenbrier. There has been a resort here since 1778, when vacationers came to this Allegheny Mountain valley to partake of the healing waters at White Sulphur Springs. But it was the advent of the railroad that led to what stands today: an 11,000-acre preserve with an Old-World hotel spanning 710 rooms, 96 historic cottages, activities galore and—did you hear?—a Cold War bunker.

Despite its pedigree, The Greenbrier isn’t staid, thanks to designer Dorothy Draper, whose 1940s design is immaculately kept up by her protégée, Carlton Varney. The grand lobby, common spaces and guest rooms are a jubilant riot of colors, patterns and textures that are over the top yet somehow work together perfectly. It has the feel of a movie set, albeit more in the style of Wes Anderson than Gone with the Wind (although the chandelier from GWTW hangs in the Lobby Bar).

For activities, what’s your pleasure? Dive into the tiled indoor pool, built in 1913, or the outdoor infinity pool. Hit the tennis and pickleball courts, take a horse-and-carriage ride, or join a class at the Fitness Center. There are two renowned golf courses (Sam Snead got his start here as a golf pro, and much of his memorabilia is on display) and an eight-lane bowling alley. Or you can head to the mountains for whitewater rafting, hiking and ATVing. The resort’s historic 19th-century cottages have been reborn as the Art Colony, where artisans practice their craft, sell their wares and offer classes such as glass blowing and jewelry making.

And did we mention the bunker? During the Cold War, the U.S. government asked The Greenbrier to build a secret underground space that could house members of Congress in the event of a nuclear attack. It lay undetected for decades until The Washington Post broke the story in 1992, prompting its decommissioning. Today, the 90-minute tour of The Bunker is a prime attraction for guests and visitors.

Yes, The Greenbrier is traditional: The formal dining room is indeed formal, and jackets are required for gentlemen. But dressing up is part of the fun, and seven other restaurants, from a steakhouse to a pizza parlor, appeal to more casual diners. Keep the jacket on if you’re headed to the Casino Club, which opened in 2010. Every evening at 10, they do a champagne toast—a new tradition that fits seamlessly with the old. 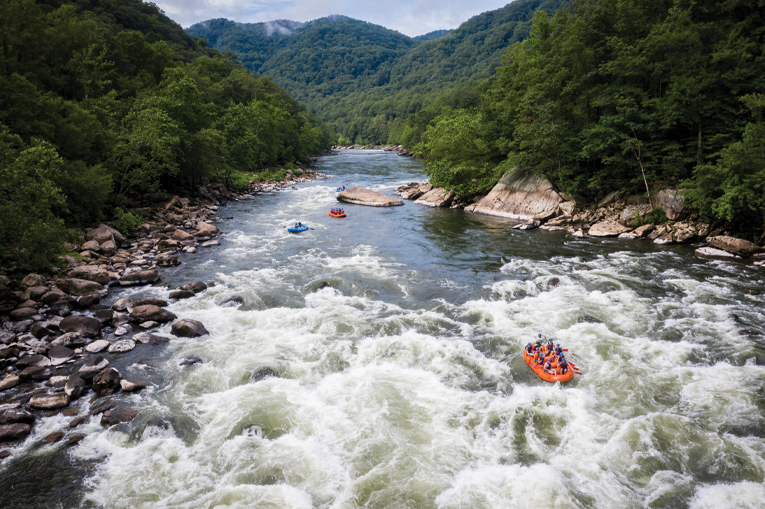 Shooting world-class rapids on the Lower New River. COURTESY ADVENTURES ON THE GORGE

One of the world’s oldest rivers is our newest national park, designated New River Gorge National Park and Preserve in January 2021. The river cuts a deep canyon through the Appalachian Mountains, and the park follows its path with 70,000 acres to explore along both sides. There are no official entrance points (or park fees), but start your trip at the Canyon Rim Visitor Center in Lansing to get the lay of the land and eye-popping views of the New River Gorge Bridge; at 876 feet, it’s the third-highest bridge in the United States.

For the best whitewater rafting on the East Coast, sign up for a gentle run along the Upper New River, with Class I and II rapids, or put on your helmet and splash jacket for a serious adrenaline rush of Class III and IVs along the Lower (18 years and older only). The Endless Wall Trail is one of the park’s premier hiking routes, an easy-to-do loop with stellar views. For a more strenuous hike, you’ll work up a sweat by following one of the old rail trails down to the abandoned Kaymoor mine.

Prefer heights to hikes? The park’s sandstone cliffs are tops for rock climbing. Want to go horizontal rather than vertical? TreeTops Zipline Canopy Tour, booked through Adventures on the Gorge, offers zip lining. For a slower pace, try the Bridge Walk, a guided tour along the catwalk that runs under the New River Gorge Bridge. It sounds terrifying but the catwalk is flat, you’re hooked into a harness, and the panoramic views will distract you.

Base yourselves at Adventures on the Gorge, where there’s lodging for every style and budget, from campsites and barebones cabins to luxury homes with perks like hot tubs and pool tables. The onsite adventure center runs top-notch tours. Post-thrills relaxation can be had at the pool, which overlooks the bridge, or during happy hour at Chetty’s Pub, a favorite local hangout for guests and guides alike. 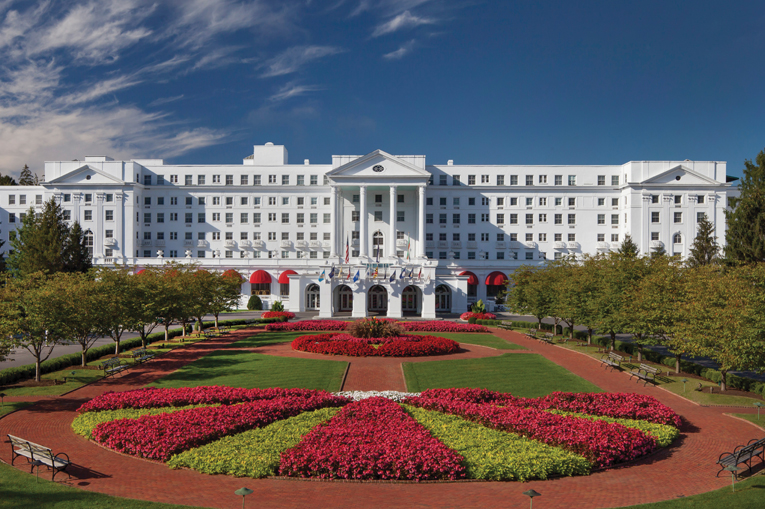 The Greenbrier in full bloom. COURTESY THE GREENBRIER

For a town of fewer than 4,000 residents, Lewisburg has a lot of accolades. The Greenbrier Valley county seat has been named a Best Small Town Escape by National Geographic, one of a Dozen Distinctive Destinations by the National Trust for Historic Preservation, and America’s Coolest Small Town by Budget Travel—a designation used in signage around town.

The picture-perfect downtown of 19th-century buildings is home to eclectic galleries and shops, like Cooper Gallery for contemporary fine art, and Robert’s Antiques, part antiques store, part wine shop. But it’s the thriving food scene that sets it apart. The French Goat incorporates classic ingredients such as truffles, foie gras and duck fat into its French-with-a-twist menu. Food & Friends is the local go-to for celebrations, and house-made pizzas on the patio at The Humble Tomato make a perfect combination.

West Virginia is known for moonshine, but here it’s all about bourbon from Smooth Ambler Spirits and creative ciders from Hawk Knob Cidery and Meadery. Both are open for tours and tastings, and host live music and food trucks most weekends. Take a road trip to White Sulphur Springs, just 10 miles away, for pulled pork at Road Hog Barbecue and craft beer from Big Draft Brewing—best enjoyed together while watching local bands play on the outdoor stage. greenbrier.com, visitwv.com 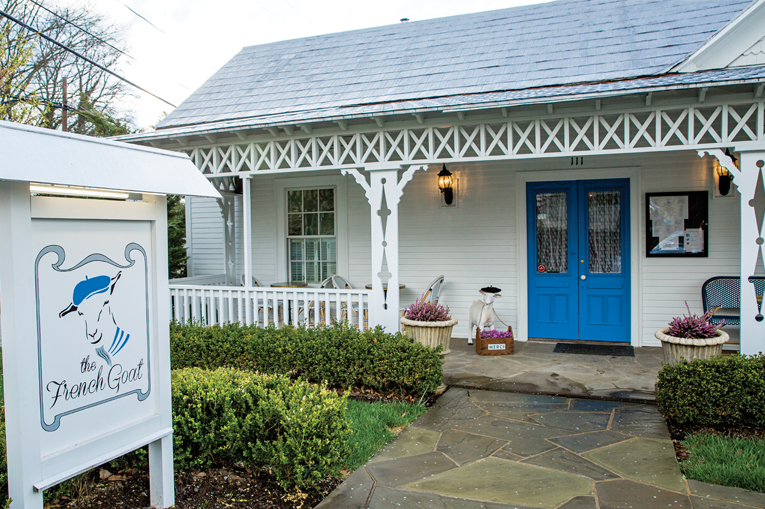 Entrance to The French Goat in Lewisburg. COURTESY THE FRENCH GOAT

This one-of-a-kind gallery and marketplace in Beckley showcases the best of everything made in the state, including jewelry, woven baskets, glassware, woodwork, pottery (Newell-made Fiestaware’s Daisy design is sold here only), plus local food and wine, from spices to craft beer. Take a hands-on glass-blowing class with resident artist John DesMeules and make your own memory. tamarackwv.com

West Virginia coal made an empire of U.S. steel. At this fascinating museum, take a tram ride into a historic coal mine, where your guide, a retired miner, shows how the dangerous work was done, often at the expense of miners’ lives. The exhibit hall displays include scrip, which counted as pay; old union banners; and a walkable “company town” made with restored period buildings. beckley.org/coal-mine

The Hatfield-McCoy trail system repurposes old mining roads for off-roading, winding for 700-plus miles through coal country. Make a stop at the historic Hatfield Family Cemetery, where a statue of Devil Anse stares down the holler. Mountaintop Adventures in Gilbert is the largest rental company in the state, with top-notch ATVs and UTVs, family-friendly side-by-sides, and guided tours by locals. trailsheaven.com

This article appears in the September 2021 issue of Orlando Magazine.
Categories: Travel
Tags: Travel, west virginia
Want to read the whole issue? Download and read this issue and others on Magzter.