One hundred years and four generations later, it remains an iconic shop in downtown Orlando.

Ever since he was a child, Alex LaBellman can remember the hoopla that surrounded the first chilly day of the year. Unlike other Floridians who were excited to finally wear their new jacket or pair of boots to school, LaBellman looked forward to seeing the long lines of excited customers clamoring outside his family’s business on Orange Avenue to retrieve their furs from storage. After all, Central Florida’s inaugural cold front meant that the busy season had officially started at LaBelle Furs.

As its name suggests, LaBelle Furs is different than other local boutiques that fill their racks with summery staples like sundresses and shorts year-round. Instead, the downtown shop leans into winter, offering everything from fur jackets to stoles to mittens and more. While it may seem an unusual business strategy, it works. Case in point: The furrier is celebrating its 100th anniversary this year, proving that even Orlando residents need a place to get their fur fix. 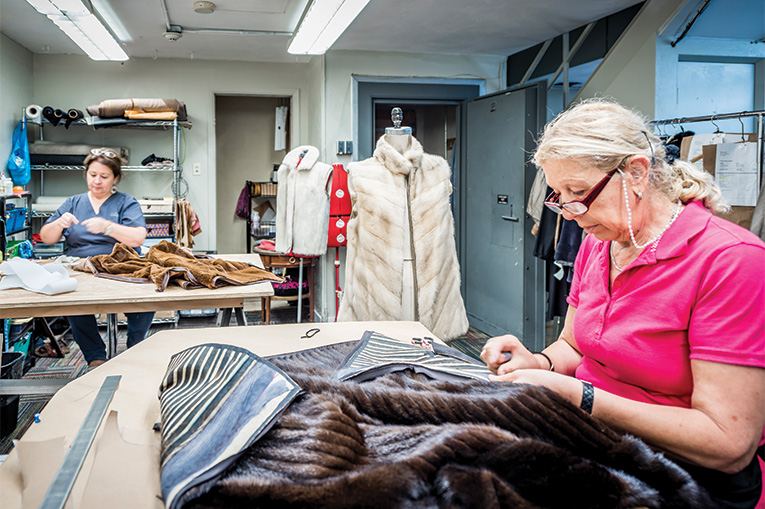 It all started in 1919 when Alex’s great-grandmother, Sarah LaBellman, opened a tailor shop on Orange Avenue, just down the street from LaBelle’s current location. Soon after, her son Morris, who was on his way home from serving in World War II, made a stop in Dallas. During his visit there, he was taken by the fur-clad models showing the latest styles in the windows of retailer Neiman Marcus, and it gave him an idea: If fur was popular in Texas’ climate, then it absolutely would be well-received in Central Florida’s comparable temps. Before long, fur was added into the mix at his mother’s shop, and LaBelle Furs was officially born.

Luckily, Morris’ gamble on bringing luxury furs to the area was a winning one, since 100 years later LaBelle remains the top full-service furrier in Central Florida with many loyal customers coming to them for over 50 years. What’s even more impressive is that the company is still family owned and operated—Alex and his wife, Santa, took over ownership from Alex’s father in March 2018 with plans to carry on the LaBellman legacy while continuing to grow and evolve with the times, including a slight name change for the shop to LaBelle Since 1919.

LaBelle has been in its current location at 351 N. Orange Ave. in downtown Orlando since 1957. When you first walk into the 7,500-square-foot building, you’re greeted by racks of different fur-adorned styles that range from capes and cropped jackets to floor-length coats and vests. The store carries fashions in a variety of fur including mink, sable, fox, lynx, rabbit and lamb, as well as cashmere items and leather goods. While the majority of the offerings are designed with cold weather in mind, there are plenty of year-round items such as handbags, hats, keychains, and even small and large teddy bears made out of former coats. Toward the rear of the store, there’s a dramatic imperial staircase that leads upstairs to LaBelle’s vintage collection where you can shop for a pre-owned piece. LaBelle also lets customers trade in their older furs for credit toward the purchase of a new one.

What you may not know is that beyond the showroom, at the back of the building, is a 4,000-square-foot cold-storage vault where clients can keep their furs throughout the spring and summer months. Typically, there are 4,000 furs being stored at any one time. “When you own a fur, you have to store it to keep the skin from drying out,” explains Santa LaBellman. “If furs are well taken care of, they’ll last 100 years.” The proper temperature for fur storage is 45 to 48 degrees with a humidity level of 40 to 50 percent. Keeping the furs cool is essential. Otherwise, when left at room temperature for extended periods of time, the oils from the skins dry out, making the fur prone to ripping.

Another cornerstone of LaBelle’s business is its Restyle Your Fur division where you can take your vintage fur and have it redesigned. “For example, if you inherited your grandmother’s coat and can’t wear it [due to fit or an outdated style], you can come to us and we’ll remake it,” says Santa. “Or if you’ve changed sizes, we can adjust the piece to fit.” Besides taking walk-in customers, the LaBellmans travel to trade shows throughout the country promoting their restyling services. “We do 500 to 600 restyles a year,” Santa continues, so the in-house tailors are always working to complete fur makeovers along with everyday cleaning and other repairs. 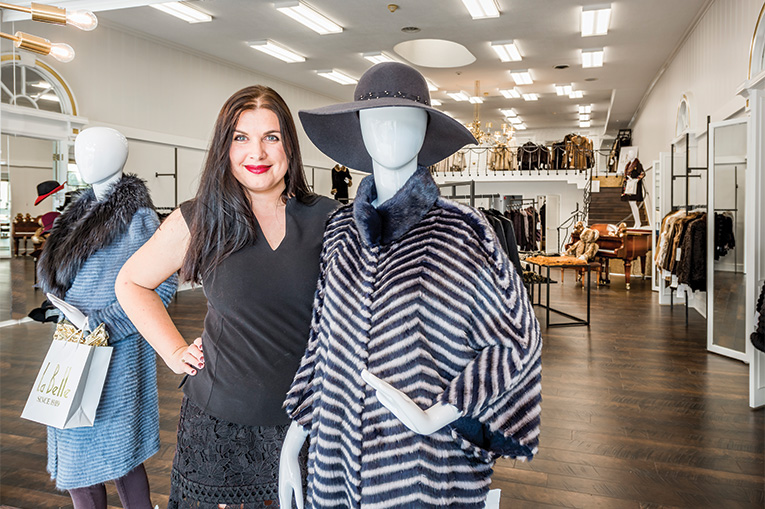 Santa LaBellman with one of the shop’s contemporary furs. (ROBERTO GONZALEZ)

The LaBellmans believe that breathing an air of modernity into the classic fur business is crucial to reinventing and reinvigorating the brand. “We want to show everyone that there’s more to the fur business than they think,” Santa says. This is also why they decided to host an Emerging Designer competition this past July. The LaBellmans selected five local designers who submitted designs based on Florida-inspired fashions, like fur-trimmed tops, skirts and dresses. “The competition gave different perspectives on how fur can be used while also showing how it can be fashion-forward,” she continues. The winner, Inna Rudenko, demonstrated that very sentiment through her sketches and is now working alongside the LaBelle team to bring her designs to life. They’ll be featured in a fashion show that is taking place in early December, and a portion of the proceeds from the sale of Rudenko’s designs will go to local charities.

LaBelle Since 1919 is commemorating its centennial year with a celebratory party in November, as well as a mini makeover of its showroom. The LaBellmans want to infuse the space with new energy to attract a younger generation of clients who may not know what LaBelle is all about. It is the largest—not to mention only—full-service furrier left in Florida. “We want to keep the vintage look because that’s how everyone knows us, but we’re giving it a face-lift,” explains Santa. “We’ve been here for one-hundred years and we hope to stay.”