Sharks Circling in at SeaWorld This Summer

This summer at SeaWorld, it's all about the sharks. On June 10, 2016, SeaWorld opened its newly expanded realm, Shark Wreck Reef, with a hyper roller coaster, Mako, as the main attraction.

The area encompasses the existing Shark Encounter aquarium attraction, the outdoor shark and ray feeding area, and Sharks Underwater Grill, plus new educational, environmental and conservation exhibits. The realm is tied together with new themed signage, sidewalk art, a signature Guy Harvey mural, and the roller coaster, which zooms right over the pedestrian walkway in dramatic, shark-like fashion. 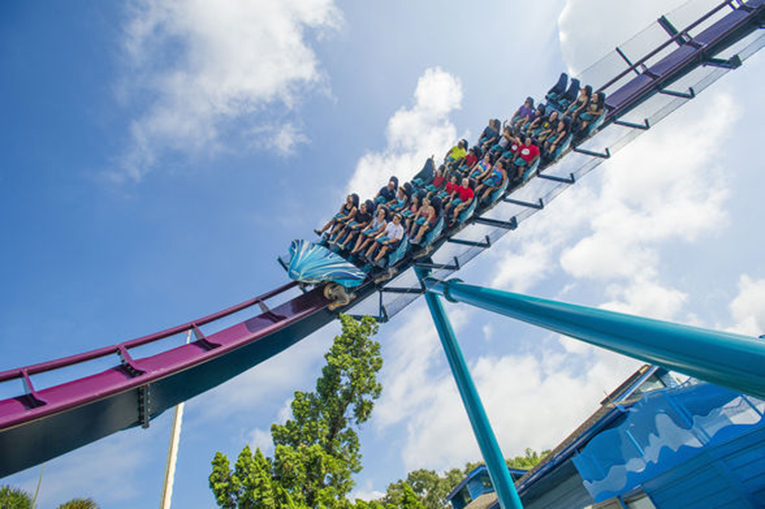 The Mako Roller Coaster at SeaWorld
With nearly a one-mile track, a 200-foot drop and speeds exceeding 70 mph, Mako is now the title holder in Orlando for the longest, tallest and fastest roller coaster in town.

Riders must be 54-inches tall, which is on par with SeaWorld's Manta and Universal's Dragon Challenge and Incredible Hulk.

"The first drop is 200-feet tall," said Mike Denninger, SeaWorld's vice president of theme-park development. "You get this great feeling of falling and airtime as you come down. That feeling of airtime continues again and again and again. Airtime is the purest coaster exprience. It gives you this exhilarating feeling of weightlessness."

In the queue, guests can watch live footage of sharks in the Caribbean and Atlantic Ocean that have been tagged by SeaWorld's partner Guy Harvey.

"Moving through our ride attraction, guests will take the point of view of being underwater and being a mako shark, slowly hunting its prey under a pier and leading to a giant shipwreck," said Brian Morrow, vice president of theme park experience and design at SeaWorld. "Everyone has come off saying it overdelivers on what we wanted it to, which was awesome speed, super smooth and relentless air time." 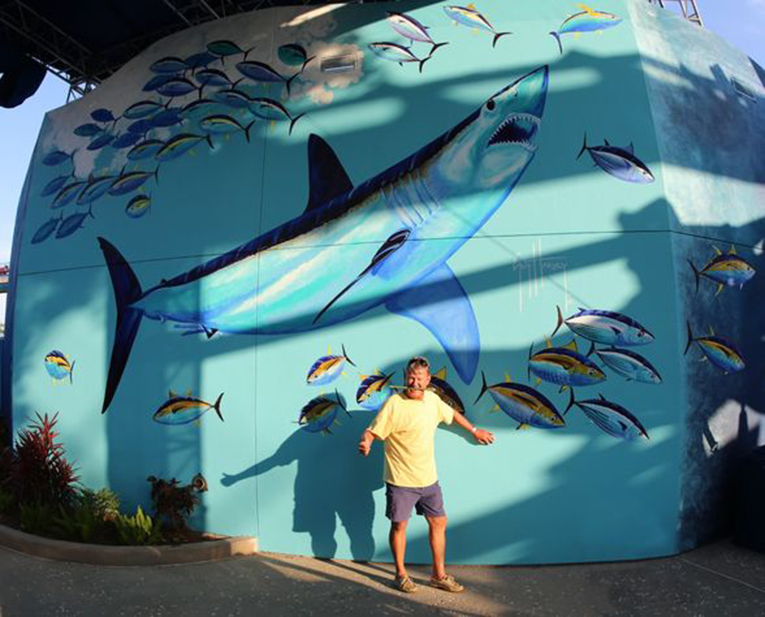 Guy Harvey
SeaWorld has just partnered with marine biologist and artist Guy Harvey for several projects in the Shark Wreck Reef, including a live shark tracking system, a large mural and exclusive merchandise.

"My institute is a leading research group in terms of mako sharks in the Atlantic Ocean," Harvey said. "We know more about makos than most other people. Also I paint makos probably more than any other artist ever has. Here's a great opportunity with one organization with whom to team up and make a big impact, excite the ride goers but educate them at the same time."

While visiting the area, visitors can track Harvey's tagged sharks in the Caribbean and Atlantic Ocean to learn more about their migrating habits and the issues they face. "Makos are the most misunderstood sharks," Harvey said. "They are overfished, their situation is somewhat dire, and so there are lots of reasons people need to learn more about makos." 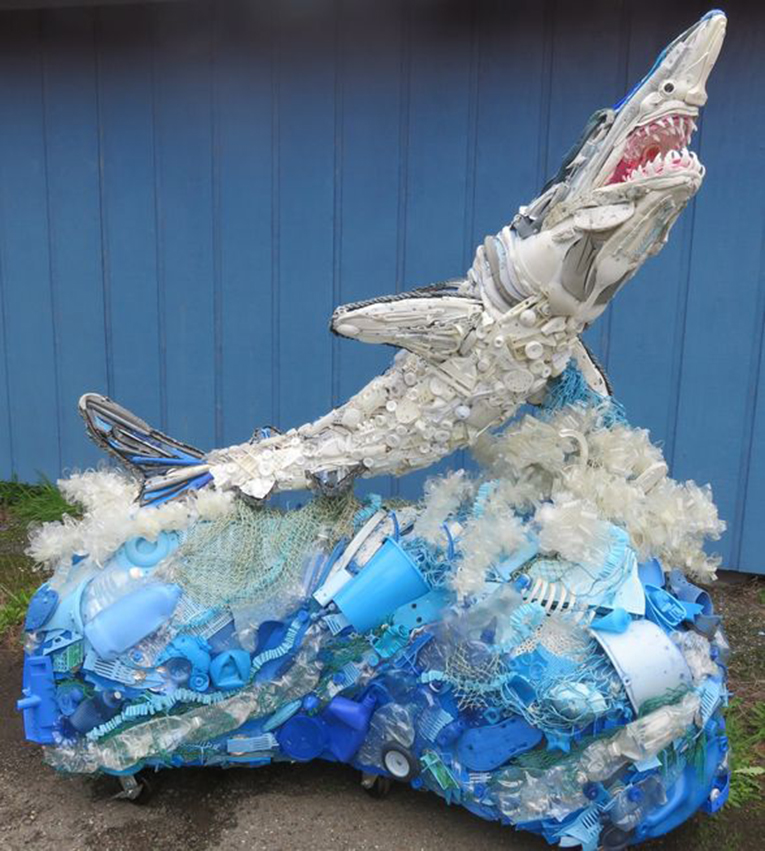 "Finn" the mako is made out of non-biodegradable plastic rescued from the ocean. (Courtesy SeaWorld Cares)

Meet "Finn"
In conjunction with the expanded Shark Wreck Reef, SeaWorld commissioned Angela Haseltine Pozzi of The Washed Ashore Project to illustrate the negative effect litter has on our beaches and in our oceans. “Finn” is made entirely from hard, non-biodegradable plastics rescued from shore, including plastic toys, buckets, shoes, toilet brush, eating utensils, water bottles and fishing nets. "Finn" is on display just outside Shark Encounter.

Surrounded by Sharks
At Shark Encounter, guests enter an indoor aquarium to get nose to nose with sharks. A moving sidewalk takes visitors through one of the largest underwater viewing tunnels in the world. There are more than 420 kinds of sharks on the planet, and SeaWorld's exhibits represent many of the most-popular species. 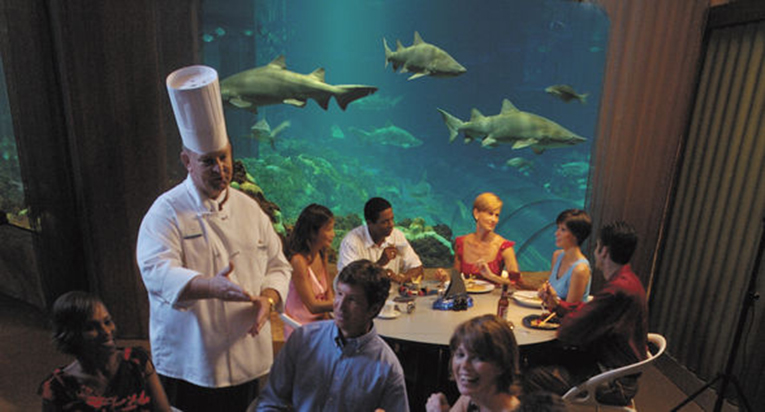 Theme-park guests can purchase fish for $5 to feed sharks in an outdoor pool, then go get a bite for themselves at Sharks Underwater Grill, one of Orlando's most unique theme-park restaurants. Diners can enjoy a sustainable and local menu of salads and seafood in a dining room with floor-to-ceiling views of the shark aquarium. Rounding out the area is an educational componet for children with an over-sized shark puzzle and a shark eye chart, teaching the lesson that humans are not part of a shark's natural diet.