Joshua Vickery’s group gives artists a place to perform, a family to join and the chance to give back through the arts.

Houselights dim and stage lights blaze at Northland Church in Longwood as row after row of some 300 singers fill the risers on stage, taking their place behind the 42-piece orchestra. All pistons fire through an evening-length songbook of hits from Hollywood to Broadway. Acrobats tumble down aerial silks, a cluster of dancers “Fosse’’ their way down stage. At the center of it all is conductor Joshua Vickery.

Tonight he is ringmaster, a fitting parallel to his role as founder and director of Central Florida Community Arts, the four-year-old nonprofit organization that is at the heart of “A Night on the Red Carpet,” performed for nearly 3,500 people over two performances. Through CFCArts, Vickery has created an opportunity for individuals of any age or ability to be part of an active performing arts group, and to give back to the community through the arts.

“What we see are people who want to use their talents for good,” Vickery says. “We see so many walks of life coming together in the arts.’’ 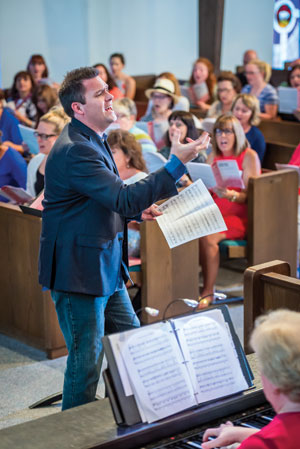 He first recognized the need while working as a casting director at Disney Entertainment after auditioning hundreds of talented individuals who were aching for a role as a performer.

“At first it was a pet project,” says Vickery, 37. “I started the choir to give people a place to perform. One hundred and fifty-two singers showed up at the first rehearsal in February 2011. Our first concert, ‘Salute to American Heroes,’ followed in May and 1,100 people not only showed up but bought tickets.”

One year later, he had transformed his pet project into a bonafide nonprofit. Today, CFCArts operates its eight program areas with a nearly $1 million budget comprising ticket sales, membership fees, individual and corporate giving, and grants. There are 450 artists participating in three choral programs and 150 musicians playing in various orchestras. The key to such expansive growth? “We have never launched a program without proper funding and partnerships in place,” says Vickery, who cites a string of partnerships from the City of Orlando for after-school programs to VITAS Healthcare, which sponsors a choir for seniors experiencing the early stages of memory loss.

Many of those attracted to CFCArts’ programs are musicians and singers who recognize a void in their lives. Perhaps they played in high school or college orchestras or sang in school musicals or church choirs, and no longer have an outlet.

Take Katrina Johnson. A singer in Legacy!, the CFCArts group that performs for charity partners, she studied opera at UCF and also performs locally with companies including Orlando Repertory Theatre and Winter Park Playhouse. This is her first year with CFCArts and she rocks her solo, “Home,” from The Wiz, at a rehearsal for the Red Carpet show. The entire room bursts into applause when she finishes. “It’s great to have this powerful choir and great orchestra behind me. It makes my heart pound,” she says. Mostly, she loves “the fellowship with other performers and singers.”

“A Night on the Red Carpet,” is the crown jewel of the 11 different productions mounted during CFCArts’ spring season (they also program a fall and winter season). If you think that sounds ambitious, it’s only part of what CFCArts does in, and for, the community.

“What makes us unique is our connection to other nonprofit organizations, where we bring art for free to their galas and events,” says Vickery, who estimates a value of $1 million in donated services to local organizations including Ronald McDonald House, Hope and Help Center, Coalition for the Homeless, Covenant House and many more. “We haven’t found another organization in the country that does exactly what we do, how we do it,’’ says Vickery.

When Orlando Ballet raised the bar by committing to live music at every performance of the 2015-16 season, CFCArts stepped up to help meet the challenge. Its top-tier orchestra members donated their time to accompany the ballet’s spring production of Beauty and the Beast at the Dr. Phillips Center for the Performing Arts, while CFCArts artist-in-residence Julian Bond arranged the orchestration of choreographer and composer Arcadian Broad’s original score (Broad is also a member of Orlando Ballet).

CFCArts has eight program areas serving artists from age 3 to 91. Children’s performance programs offer singing, dancing and acting through musical theater as well as musical ensembles, a youth orchestra, a performing arts school and after-school programs in Orange, Osceola and Seminole counties. Today, the group impacts about 500 kids per week throughout Central Florida.

Perhaps the organization’s most impressive program, though, is its newest choir, Musical Minds, designed for adults experiencing early stages of memory loss, dementia or Alzheimer’s disease.

Members meet every Wednesday morning, along with their care partners, to sing from a repertoire ranging from the 1930s to 1960s. Because they are the songs of their youth, they are unforgettable. “Repeat after me—‘This is a safe space,’ ” says choir director Kevin Harris from his perch behind the grand piano in their meeting space at Central Christian Church in College Park. He then invites everyone to get up and dance as they sing “Rock Around the Clock.” Then Chris Shepherd, a community leader through Watercrest Senior Living Group (a corporate sponsor of the program), invites a woman, who usually requires a walker, to dance and the duo joins the throng in whatever empty spaces are left in the room to swing through this ’50s fave.

Throughout the 90-minute session, a married couple sits side by side, holding hands; the husband transforms from vacant to vibrant, his face animated as he joins in song. Joy washes over him. His wife beams.

The dancer’s adult daughter, Sarah Cahill, gushes when asked about her mom’s experience with the choir. “The people there are amazing,” says Cahill as she shares a cellphone photo of her mom posing with Harris and Shepherd. “They’re her peeps.”

“I wish they had something several times a week for the seniors,” she adds, pointing out that Wednesday mornings are her mother’s greatest joy.

Joshua Vickery translates all of these activities as being more about the community than the arts. “The arts are the facilitator.”

Choir member Amy Easter embodies that statement. Easter found CFCArts three years ago after returning from living in Georgia. “I wanted to get back into music and voice lessons and was looking for a choir to join,” she says. “Since my first concert with CFCArts in 2013, I have found my love [for music] again, and getting involved in the arts has helped me take care of myself.” Easter shares that she has since lost 100 pounds and has the confidence and support to shed 50 more to reach her goal before her winter wedding.

At rehearsal, Easter steps away from her section of the choir, a group of ladies dubbed “the Front Row Altos,” and heads to the microphone beside the conductor to sing her solo, “You’ll Never Walk Alone,” from the Broadway show Carousel.

It’s clear that this song touches Easter in a very personal way. “It’s about the journey of finding myself again,” she says, opening her arms to include the huge group of singers behind her, “with a really big family.”