Take a ride behind the scenes to examine the engineering and physics of Orlando’s most popular roller coasters.

As you drop down that first hill, you experience a moment of zero gravity. You float up out of your seat as though you’ll take off and fly through the air. Then in an instant you’re pulled back to Earth again and you soar down the hill and up the next. You’re accelerating more than two, three, four times the force of gravity, glued to the back of your seat. You race through corkscrew turns, upside-down inversions and another big drop with constant changes in speed, motion and force that your body has never experienced before, a series of ups and downs that’s, well, a roller-coaster ride.

Roller coasters take only about two minutes to ride, and in those minutes, your mind is numb to everything but the next turn. Yet they take years to develop and are created by some of the world’s sharpest science minds. Every single element of a roller coaster, every blissful moment of airtime and stomach-turning inversions, has been precisely planned by a team of expert engineers. Without physics, a roller coaster would simply be a train stuck on its track. 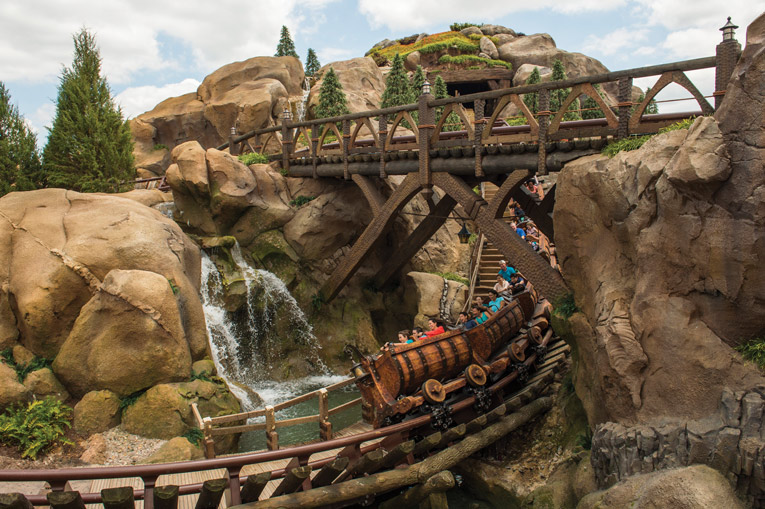 Disney’s family-friendly Seven Dwarfs Mine Train is themed on the film Snow White and the Seven Dwarfs.

Brian Morrow, SeaWorld’s senior director of creative development, is a civil engineer by trade and has been designing roller coasters since childhood, making models with his toys. “For kids, it’s magical and amazing that these coasters run around without any motors inside of them. It’s not a car. It’s all gravity. You have to drag it up to the top of the hill, and then we let go of it, and it has to make it all the way around on its own energy.”

The energy at the top of the hill is called potential energy, and once gravity takes over, it’s kinetic energy, where there is real physical motion. Then there are acceleration and velocity. Our bodies actually cannot feel velocity, only acceleration. Riding on an airplane going 500 mph feels no faster to us than riding a bike around the neighborhood. It’s the change in velocity and the different forces it creates that we actually feel, something Morrow and his team study closely.

SeaWorld and Busch Gardens employ about 18 engineers onsite at each of their parks around the country. While a third-party roller coaster manufacturer is ultimately responsible for the complex math and engineering, Morrow and his team tweak the formula for the SeaWorld audience. For the coaster Manta, that was a 24-month process.

Manta, along with Kraken, at SeaWorld Orlando has consistently made top 10 lists among roller-coaster fanatics and in prominent media like the Travel Channel, which has featured both attractions in its series Insane Coaster Wars.

“We have a very special formula that we use—that I’m not going to tell you because it’s a secret—that gives us the pacing and the script for our coasters,” Morrow says. “We write our script to give the best possible emotional and physical experience, and the pacing is how fast those elements happen. We want our rides to be very repeatable and very enjoyable. We actually stretch our elements out a bit, giving our riders the chance to experience each element, take a breath and go on to the next one.”

That’s not to say Kraken and Manta are for the faint of heart. Kraken was one of the first floorless coasters and goes through an intense seven inversions. In Manta, riders face the ground, going 56 mph and then diving straight down 98 feet.

Orlando’s theme parks are competitive, and their engineers grasp tightly to their secret formulas. But it’s not all math and science. In fact, one thing SeaWorld, Disney World and Universal agree on is that the story is the key element to each ride.

“There are numerous complex equations that go into making the perfect roller coaster,” says one of Universal’s engineers who wished to remain unnamed. “The one I like best is a top-secret algorithm that results in the perfect balance of desire, challenge, anticipation, velocity, geometry, exhilaration, acceleration, laughter, accomplishment, family, friendship and memory.”

Universal Studios and Universal Islands of Adventure offer guests serious roller coasters with inversions, high speeds and heavy g-forces. Before developing a new attraction, Universal forms a team of employees from different educational backgrounds and specialties. But at the core of their work is a great story.

The Mummy takes you through a tomb deep underground with water and fire elements. Riders select one of two intertwined coasters at Universal’s Wizarding World of Harry Potter’s Dragon Challenge, where an aggressive Chinese Fireball and a Hungarian Horntail dragon chase each other through the sky. The Hulk roller coaster is fierce, angry and twisted as it explodes from zero to 40 mph in just two seconds. At SeaWorld, Kraken’s story line has an angry sea monster emerging from the ocean to protect her eggs, and in Manta, guests are transformed into a manta ray as they fly through the air and take a wing dip into the water below.

One of the most popular roller coasters in town right now—with lines that frequently exceed 60 minutes—is not super thrill-seeking but rather features a strong story. The development of Seven Dwarfs Mine Train at Disney’s Magic Kingdom took all the classic engineering disciplines working together including mechanical, electrical, materials science, structural and computer science, but the ride is so successful because it immerses guests into the world of Snow White and the Seven Dwarfs as they load a swinging ore car and set off on a mining expedition.

“We specifically wanted to target our youngest coaster fans,” says Jerold Kaplan, director of design and engineering at Disney. “There was a lot of complex analysis to follow to make sure the physics of the swing motion and vehicle speeds were appropriate. Ultimately it was that same swinging ore car, so critical to the story we wanted to tell, that gave us the additional flexibility to make that happen. This is due to the fact that swinging provides an extra range of motion you don’t typically get on a roller coaster. We didn’t have to sacrifice some of the faster speeds, bigger drops and tighter turns we might have otherwise had to if this were a more traditional coaster. It turned out to be a really good mix that makes it fun for kids and adults alike.”