Savannah’s artists and visionaries are shaping an exciting future that is inspired by the past.

Mead may sound like something Shakespeare’s characters imbibed, but belly up to the tasting bar at Savannah Bee Company, and you’ll find that the ancient elixir made of honey, water and brewer’s yeast is making a modern comeback. Considering that there are 300,000 different honeys in the world, no two meads are alike. But you can try five during a guided tasting at one of Savannah’s signature businesses, a passion project by a local entrepreneur.

From honey to handbags, chocolate to whiskey, and, of course, the venerable Leopold’s ice cream, whose boozy Rum Bisque has been drawing crowds since 1919, Savannah has been a canvas for creative minds since General James Oglethorpe founded the colony of Georgia in 1733. Oglethorpe set out a gridded design for Savannah that would provide oasis and inspiration to residents and visitors alike for centuries to come. Today, it is the largest Urban National Historic Landmark in the country. 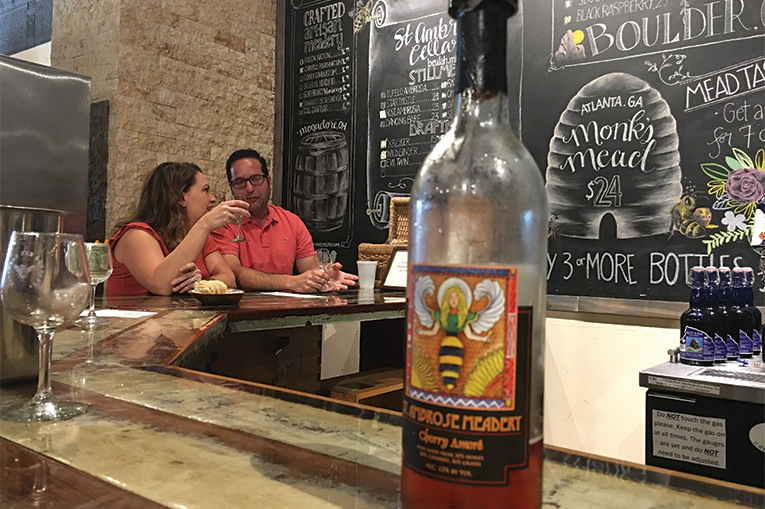 ​Savannah Bee Company peddles all things made with honey, including mead, considered the oldest alcoholic beverage in the world. (MEGAN PADILLA)

Walking the city’s cobbled streets and shaded squares surrounded by mostly 19th century buildings tops most visitors’ list of favorite things to do. Much credit is owed to Savannah College of Art & Design. Since opening in 1978, SCAD has bought and restored 70-and-counting buildings, with its campus reaching into every corner of the Savannah Historic District.

“SCAD is the main fixture in town and the largest owner of real estate in Savannah,” says hotelier Mark Kessler, whose family arrived here from Austria in the early 1730s and has been part of the city’s fabric ever since. “It’s one of the reasons the historic district gentrified.”

SCAD enrolls a steady flow of art and design students, many of whom stay and hang their own shingles; other creatives follow suit. Shopping in Savannah used to be about the antique stores and quaint shops—and it still is—but now there’s so much more. 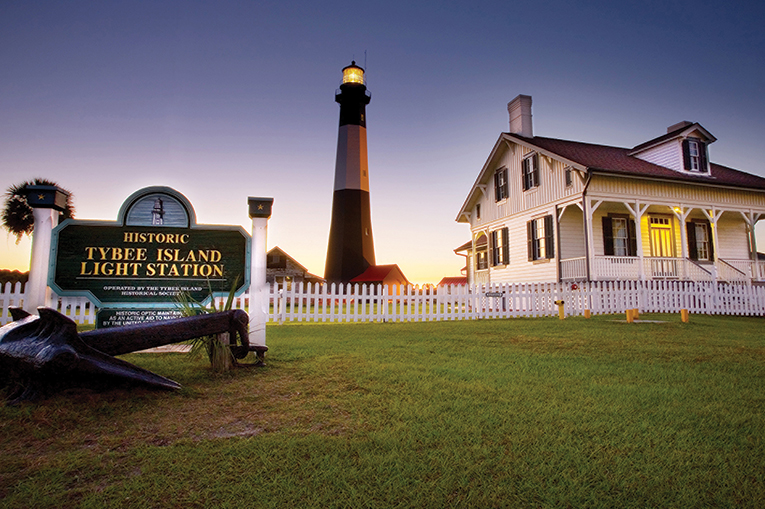 See all of Tybee Island from the top of its lighthouse. (VISIT SAVANNAH)

Start your walk from The Kessler Collection’s 125-room Mansion on Forsyth Park, a beautifully crafted boutique hotel facing the city’s crown jewel. Forsyth Park’s 30 acres were used by both Confederate and Union troops for training, and today serves as a venue for weekend festivals, a farmers market, concerts and more.

Cross the street from the Mansion to the 1858 cast-iron fountain that is the centerpiece of the park and then continue north, exiting onto Bull Street. A few blocks up is ShopSCAD, a gallery/store devoted entirely to work by SCAD students, faculty and alumni and filled with surprises including fine art, apparel, gifts, décor and jewelry. The designs of Kristen Baird—a 2012 graduate—are a hot find for engagement rings. Her modern bands are set with responsibly sourced, recycled gemstones. You can try them on and custom order, too, at ShopSCAD as well as the Grand Bohemian Gallery at the Mansion on Forsyth Park.

Soak up the warm hospitality of Old Savannah at the Gryphon Tea Room across the street. Enjoy seasonal fare served on white linen-covered tables surrounded by carved mahogany bookcases and circa 1926 stained glass panels.

Continue through verdant Madison Square and another block to Satchel, just two storefronts off Bull Street on East Liberty. Satchel is where every concierge will direct you for handcrafted bags and leather goods. Beside it is the Book Lady Bookstore, within whose stacks you could lose the rest of your day.

Perhaps the only lure out of the bookstore is the promise of chocolate in another. One block further north is Chocolat by Adam Turoni. This Culinary Institute of America wunderkind chose chocolate as his element and partnered with designer Alexandra Trujillo de Taylor to create two luxurious ateliers. The first on Broughton Street is a whimsical Alice in Wonderland tea party fantasy; the second, on Bull Street, is fashioned as an antique bookshop whose tomes contain the secrets of the universe, and whose shelves share space with bonbons almost too exquisite-looking to eat.

Your Bull Street stroll practically dead-ends into Kessler’s Bohemian Hotel Savannah Riverfront, where the Rocks on the Roof bar offers the best views (and charcuterie platter) in town. Look down at the working waterfront to be reminded that this is where Savannah began. Then glance upriver, toward the Talmadge Bridge, and note the construction cranes. They signal Savannah’s future.

Richard Kessler, Mark’s father, is giving new life to a decommissioned Georgia Power plant on the west end of River Street. The plant’s industrial, cathedral-like generator building will offer soaring loft-style suites. When it and the other four buildings containing more than 600,000 square feet are restored, repurposed and reimagined in 2019, the Plant Riverside District will expand the footprint of the historic district. The new district will open roadways to the river that have been closed for more than a century, extend the riverwalk, add outdoor and indoor entertainment and event venues, parks, retail, restaurants and bars, plenty of parking and three distinct JW Marriott hotels (the brand’s highest level). Each hotel will celebrate one aspect of Savannah’s character: romantic, historic and modern. The Plant Riverside District will give visitors even more reasons to love Savannah and to come back again and again.

It’s always a good time to visit the Hostess City of the South. If something is worth celebrating, Savannah has a festival for it. Plan your trip at visitsavannah.com

Cooking Classes
​Join the chefs from 700 Drayton Restaurant at the Mansion on Forsyth Park for unique, hands-on cooking classes where you can learn to make homemade pasta or a delicious Low Country crab stew. Classes are popular so check out the calendar and book your favorite in advance at mansion.classesbykessler.com

Distillery Tour & Tasting
Anyone who appreciates spirits (as in the sort that Prohibition made illegal), Savannah history, or a hands-on lesson in cocktail making should visit newcomer Ghost Coast Distillery. Free tours include a multimedia presentation and a guided tour of the distillery and end in the Cocktail Room. ghostcoastdistillery.com

Forgotten Island
No retail or restaurant chains are allowed on nearby Tybee Island, but you may run into best-selling author Mary Kay Andrews signing books at Seaside Sisters gift shop. Paddle the estuaries with Sea Kayak Georgia, refuel on barbecue at Gerald’s Pig and Shrimp, and scale the Tybee Lighthouse, the tallest in Georgia. visittybee.com

Mansion on Forsyth Park
This 125-room boutique hotel is one of two Kessler Collection properties in Savannah. It was built new, but inspired by the 1888 restored mansion next door. The hotel houses fine dining, event space, a cooking school and a gorgeous bar where you can go for cocktails and live music. mansiononforsythpark.com