You just may find your home away from home along the white sandy beaches of Gulf Shores and Orange Beach, Alabama. 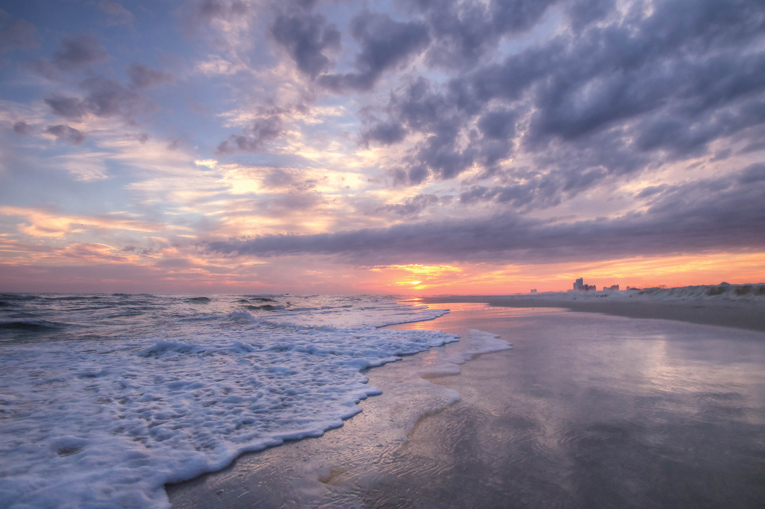 Alabama claims a mere 60 miles of the Gulf of Mexico’s shoreline, with the Perdido River serving as the state line with Florida. Depending on who you talk to, it’s often surmised that Alabama was cheated out of its fair share of what’s commonly known as the Redneck Riviera.

But you won’t miss a thing while visiting this sunny stretch of unspoiled coastline. Known for its sugary white sands and turquoise waters, Gulf Shores and Orange Beach, Alabama, comprise 32 miles of the Panhandle’s Emerald Coast, with Southern hospitality front and center. 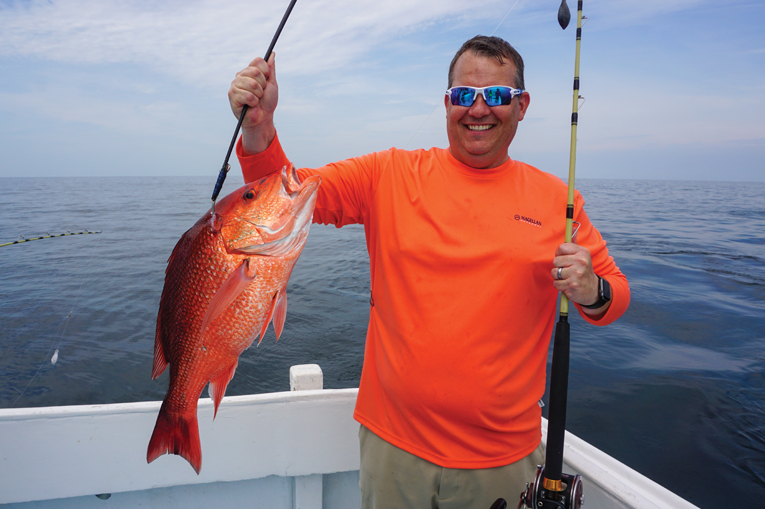 Get your fresh catch-of-the-day straight from the Gulf. GULF SHORES & ORANGE BEACH TOURISM

Reel Surprise Charters can take you to these rich fishing grounds through half-day and full-day deep-sea fishing excursions leaving from Perdido Bay.

The company is named after the first charter boat, a 65-foot Bonner, that owners Randy and Susan Boggs bought 16 years ago. The couple recently repowered the large vessel and remodeled the air-conditioned cabin. A small bar and two restrooms provide for a comfortable trip, and if you’re queasy about baiting your own hook, the crew will do it for you. With a fleet of eight boats, charters are available by reservation for all skill levels.

With feet firmly planted back on the ground, take your pick of pristine beaches running from Gulf State Park (see sidebar) in Gulf Shores, which could easily be a destination in itself, to slightly west of Gulf Shores where Fort Morgan guards the southernmost point of Alabama.

When visiting Fort Morgan, consider taking the self-guided tour of this preserved Army fort, where you’ll learn the historic progression of seacoast fortification that began during the Spanish-American War and continued through World War II. 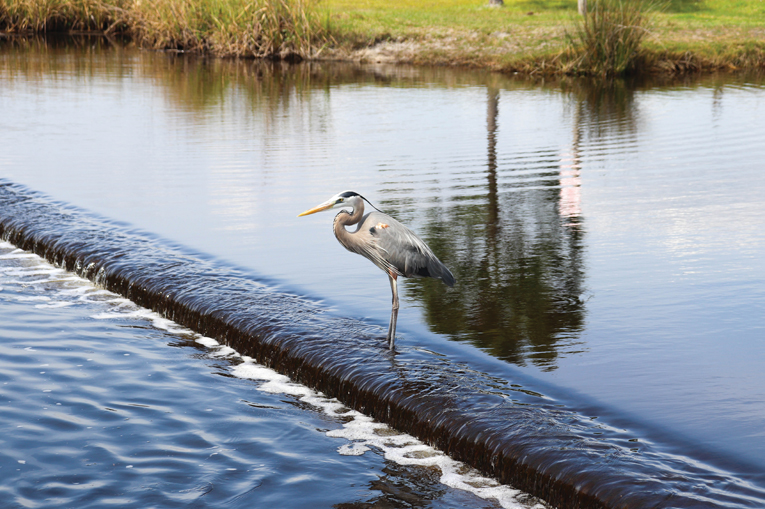 Great blue herons and dozens of other shore birds make their home along the coast. GULF SHORES & ORANGE BEACH TOURISM

A six-mile hike through the nearby Bon Secour National Wildlife Refuge highlights preservation of a different nature in Alabama’s last natural habitat for coastal barrier wildlife. On the way out to the quiet side of things, stop by Sassy Bass Market Place, where you can get all the fixins for the perfect picnic to be enjoyed on the beach or under a shaded thicket of oaks and palmettos.

Its founder, Janel Hawkins, can teach even the most architecturally challenged sculptor how to build a sound castle made of sand. And the best part? It takes place on the beach, where you can dig in your toes for the day. Hawkins shows up with all the tools of the trade, such as buckets, spatulas and plastic spoons. At the end of the class, you’ll receive a time-lapsed video documenting your experience. Reservations are required, and advance bookings are highly recommended.

Along Gulf Shores Parkway (Highway 59), there is a sea of condo options, many with private-access beaches, depending on where you stay. Meyer Vacation Rentals can give you the hookup from their diverse selection of properties spanning the entire coast.

But for public beach access, you’ll want to call The Hangout your home base for the day. Located in the center of the action and known for its mammoth music events, this entertainment mecca also features a solid menu, a literal wall of cocktails and open-air seating directly on Gulf Shores Public Beach. Mark your calendar for the Annual Oyster Cook-Off Craft Spirits and Beer Weekend, happening Nov.  5-6. 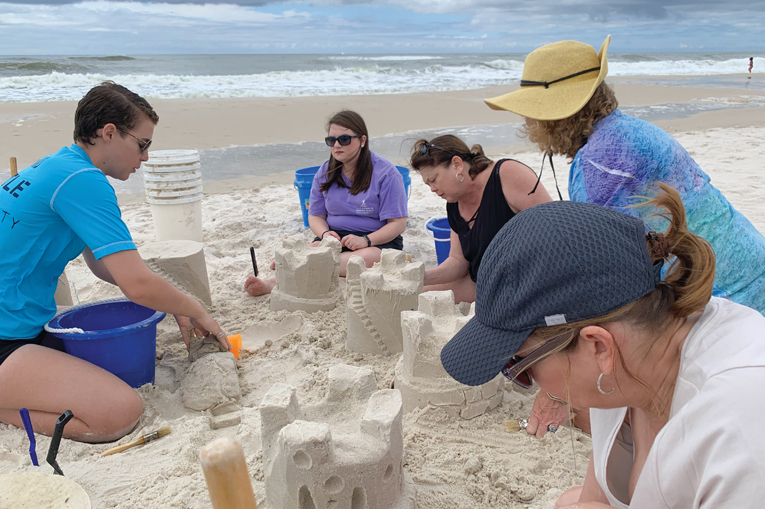 When it comes to oysters, you really can’t throw a single pearl and not hit an oyster joint of some quality. One of the better establishments is Fisher’s at Orange Beach Marina. The two-in-one operation offers casual dining at its Dockside eatery—where you can order a seafood tower appetizer of Murder Point oysters, steamed Gulf shrimp and crab claws—and its Upstairs restaurant, with a dinner menu of fine Southern cuisine sourced primarily from the region.

Proprietor and namesake Johnny Fisher most recently added Playa at Sportsmans Marina, less than four miles away, to his family of restaurants. Featuring Caribbean and Latin American fare, the tropical cocktails alone are Insta-worthy, but you’ll be glad you stayed for the fresh tacos prepared with homemade tortillas.

When Hurricane Sally ripped through the area last year, The Royal Oyster Bar seemingly battened down its hatches forever. But the owners are bringing their successful blend of boutique oysters, a thoughtful wine and spirits list, and all-around good taste to a different location that is slated to open this summer. The new locale, on County Road 6, will also feature a convenience store and an Airbnb that promises to be one of a kind.

Carver’s Steakhouse in Orange Beach is the area’s newest choice if you’re needing a palate cleanser after all that fresh seafood (as if that’s even going to happen). Carver’s specializes in wood-fired steaks and chops, but has a healthy regard for the coastal environment and offers a creative, Gulf-inspired selection of seafood. And, yes, oysters.

No matter how you enjoy the Southern graces of the area, when the sun sets on a day well-lived in Gulf Shores and Orange Beach, there is no escaping its vibrant beauty. Find a spot that is just your speed and witness the magic. 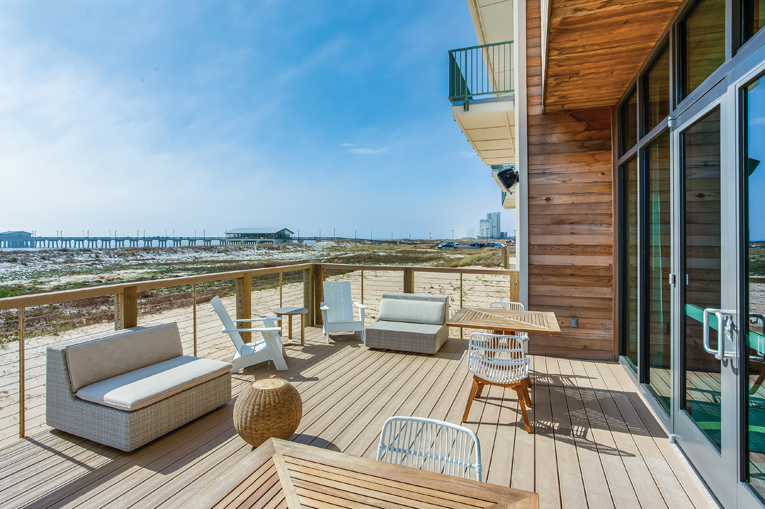 Featuring 2 miles of coastline, the park offers that quintessential beach vacation and so much more, with its nine distinct ecosystems, 28 miles of trails, Lake Shelby, and some excellent spots for stargazing. Here, you can let Mother Nature lead the way.

With a full-service hotel on the  property, the culinary and beverage options far exceed what you might expect from a state park. For more casual options, concession stands and camp stores around the park offer everything from icy treats to fully prepared meals.

Because of the park’s close proximity to Gulf Shores and Orange Beach, you can always drive off property for a night out on the town. And well within driving distance are excursions to Fairhope and Mobile, Alabama, as well as Coastal Mississippi.

This article appears in the July 2021 issue of Orlando Magazine.
Tags: alabama, beach.fishing, gulf, shore, Southern Exposure, Travel
Want to read the whole issue? Download and read this issue and others on Magzter.