Rebels With a Cause

The Grown Ass Woman Brigade marches to a message of irreverent independence.

Back-stabbers need not apply. And whiny pity-party types? Take your tissues elsewhere.
If you want to join the Grown Ass Woman Brigade, you’d better be forthright, strong and kind, say co-founders Heather Lam and Suzanne Meehle. “A Grown Ass Woman is comfortable in her own skin, and she can put on her big-girl panties and deal with whatever comes her way,” Meehle says.

The Central Florida support network formed in 2010 after Lam told Meehle, “It’s so nice to talk to another grown ass woman!” Lam says she suggested they form a group for like-minded women and Meehle said, “Yes! Like an army. Could we be a brigade, because they have the best uniforms?” Lam, 40, serves as president, and Meehle, 45, is vice president.

Lam is careful to point out that not all women are passive-aggressive, a behavior she partly attributes to cultural differences. “When a man competes, it’s, ‘Yeah, that’s awesome that you did that. Now I’m going to do it better.’ They propel each other upward. Women were trained to think of ourselves as being less. So when somebody does well, it seems like there’s this inclination to tear down instead: ‘The only way for me to be better than you is to tear you down and make you lower than me.’ ”

Lam says she was bullied by the “mean girls” in school: “I had a big, red bull’s-eye on my back and it was not from Target.” GAWB mentors young women and tries to steer them away from counterproductive workplace behaviors, Meehle says. “And if you’re still living in that world, we’ve got news for you: We’re coming to get you, and we’re not taking it anymore.”

GAWB aims to help its members refine their life dreams to manageable goals and redefine success. Not all women want to climb the corporate ladder, Lam says. After becoming a nonprofit in 2012, GAWB awarded its first $500 microloan to Jessie Zielinski of Hoop Fit Orlando, who makes collapsible hula hoops that fit in a suitcase. Zielinski also teaches classes in hoop dance and hoop Pilates/stretch.

Zielinski says GAWB gave her the tools she needed for success, but “this is no hand-holding nursery school. Just as this is my business, it is my responsibility to take those tools and put them into action. I am on an exciting path to seeing my business grow and flourish. None of it would be possible without the GAWBs.”

Hula hooping isn’t every woman’s dream, but the essence of being a Grown Ass Woman is saying, “It’s my life, and I‘m going to do what I want to with it,” whatever that may be, says Meehle, who has a solo practice. “If I did things the way I was supposed to, I would have gone to work for a big law firm and locked myself away for 30 years to pay off my student loans, slogging away for a male boss who didn’t appreciate me. I said, ‘There’s a big cliff and I’m going to jump,’ and I did. And that’s not a bad model for women.”

Although GAWB membership is by invitation only, anyone can join the fan page on Facebook (facebook.com/GAWBOrlando) or attend Lam’s occasional seminars on “Being GAWB-tastic,” which are sometimes conducted virtually on Google Hangout. “You can be a GAWB without being in that core group, but the core group is the driving force,” says Lam, who recently moved to San Leandro, Calif., after 16 years in Orlando.

GAWB has grown from 20 members to more than 100, including some in Virginia and New York, but Orlando will remain the hub. GAWB is selective and wants to grow slowly. “We don’t want to ruin the magic of the group,” Lam says.

The strong personalities of Lam and Meehle complement each other. Lam, a self-described “force of nature,” is the group’s “chief catalyst,” while Meehle handles the business matters, but both women are fascinated with … llamas. It’s impossible to be unhappy if you say the word llama, Lam explains.
Happily, strong women aren’t afraid to act grown ass silly.

A Central Florida town celebrates the stars by keeping you in the dark. By Roger Moore

One of the lingering memories of 2004's Hurricane Charley was how Central Florida looked with the power out. The neon-and-halogen-glow of Orlando receded and pitch blackness took over. The star-gazing was spectacular.

These days, you have to go to great lengths to find a night sky dark enough to see what used to get Galileo so worked up.
"There's Kissimmee Prairie Preserve," near Okeechobee, offers Derek Demeter, director of the Seminole State College Planetarium. Ocala National Forest? "The light dome of Ocala and even Gainesville has ruined that." Farther west, Demeter has heard of a shell mound just off the coast in the Gulf of Mexico.

But one place, easy to get to, is celebrated for its darkness and its star-gazing. The planned community of Harmony, southeast of St. Cloud on U.S. 192-441, was designed as a close-to-nature living space where 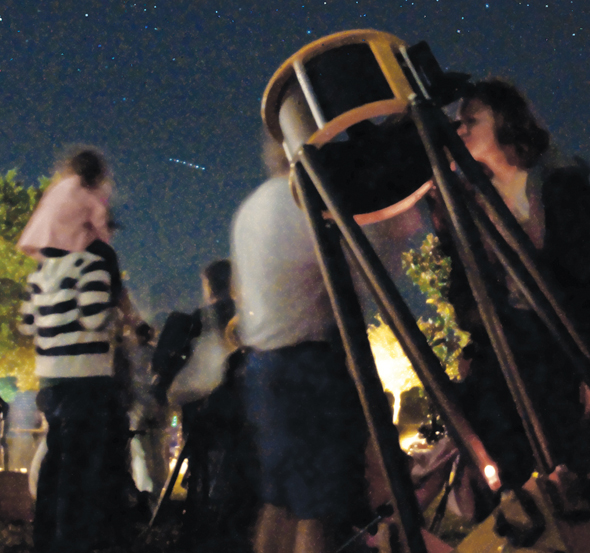 residents could live among, not displace, wildlife.

"Part of that was an effort to protect the night sky," says Greg Golgowski, conservation director for Harmony. The planners decreed shielded street and outdoor home lighting that doesn’t cast light upward.
Harmony has been recognized by the Dark Sky Association as a "development of distinction,’’ and the town square is rated Class 4 on the Bortle Dark-Sky Scale of Light Pollution used by amateur astronomers—which means it’s dark enough to see the Milky Way. That’s why, once a year, Harmony celebrates the Dark Sky Festival, a night of music, food, exhibits, nocturnal nature-watching, star-gazing and talks by NASA experts. The event, unique to the East Coast, began with just 450 sky enthusiasts but in recent years has drawn upward of 5,000. On February 2, the Dark Sky Festival celebrates its 10th anniversary.
"We're outside the urban glow of Melbourne or St. Cloud," Golgowski says. So, Demeter adds, the light domes from those cities haven't spoiled Harmony's views.

Demeter promises "sort of an open-air planetarium," with telescopes and high-powered laser pointers that allow astronomers to point out planets, stars and constellations.  "Kids who have never spent much time outside of a city will be stunned by what they can see in a truly dark night sky," he says.

The festival runs 5 to 10 p.m. and admission is free. For information go to darkskyfestival.com

This article appears in the January 2013 issue of Orlando Magazine.
Categories: Community