Rebel Without a Pause

For four years, Jeff Sonksen has blazed a mile-long trail for public art along a Seminole County bikeway. And he’s nowhere near finished.

Bike or walk along the Seminole Wekiva Trail and you’ll likely be bowled over by the vibrantly colored parade of paintings that adhere to the fence line for nearly a mile. This outdoor gallery, mostly along a Longwood/Lake Mary stretch between E.E. Williamson Road and Lake Mary Boulevard, might be a work of genius or perhaps of artistic madness. But for artist Jeff Sonksen, it’s basically an idea that just won’t stop.

“I’m ADD, OCD. I’ve never stayed focused on anything for a long time,” says Sonksen, who is married with two kids and used to make his living as a carpenter/cabinet maker before the housing bubble burst. “It’s been four years since I started the trail and there’s not any part of me that’s even slightly bored.” 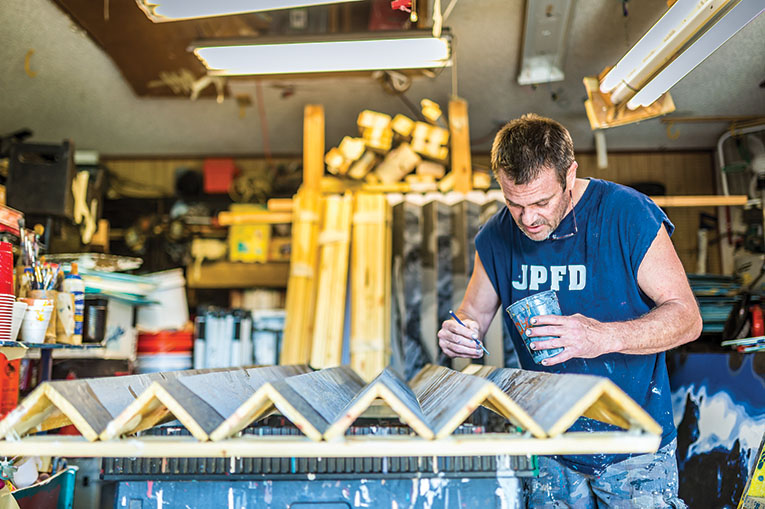 Sonksen produces the paintings in his garage, then drives them to the Seminole Wekiva Trail and attaches them, mostly to existing fences.

Sonksen, a Longwood resident, has lost count of the number of paintings he’s contributed to his Paint the Trail project, but he estimates it’s a thousand now. Most give a nod to pop culture icons, from Bob Marley to Judy Garland to Elsa from Frozen. All have a positive message. “If I can make someone go from feeling all right to feeling good, maybe they’ll be a little more decent to the next person and then the next. That’s the ripple effect. If it’s done right, art can make a difference.”

In the beginning, Sonksen’s inspiration came almost entirely from requests, many through his Paint the Trail page on Facebook. But these days, the 47-year-old just takes those requests into consideration.

He gets paid a couple of hundred bucks here and there for dedication-style works, such as the 30th anniversary trail painting he did for a local couple. Occasionally he’ll share something he’s working on via social media and someone might offer to buy it before it goes up on the trail. “Everything I paint is for sale before it goes on the trail. Once it’s on the fence, I don’t care if you have a million dollars.’’

So why do it? The real motivation, one might surmise, is Sonksen’s commitment to public art and a penchant for rebelliousness.

Case in point: No one has ever officially sanctioned his trail paintings. A few neighbors have been asked for permission—including his own mother, whose property backs up to the trail—but mostly Sonksen just goes for it. And yet, no fines have been levied and not a single painting has been removed or vandalized.

“There’s a bizarro respect for these paintings, and I think it’s because I involve everyone by asking for suggestions and quotes. I’ve seen art affect people in some mysterious ways,” Sonksen says.

Sonksen’s fans are numerous, with postings on his Facebook page ranging from thanks to awe. And then there are those who see the works in person.

“Every city or town has multi-use trails, but we’re the only ones that have Mr. Jeff and his wonderful artwork,” says  Sonksen fan Sharon Lezlee. “The first time we came upon his artwork on the trail, we were just amazed. You could have a million things running through your mind and then come upon something he’s done. What a great distraction. You don’t have to visit a museum to see it.” 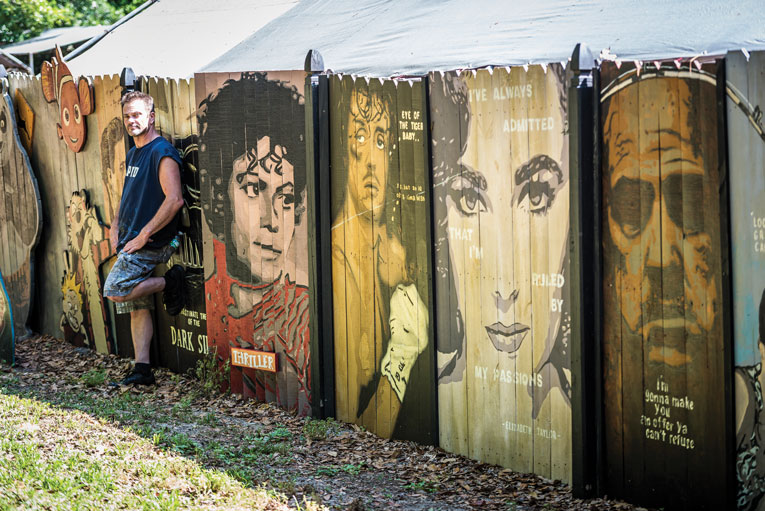 Sonksen is particularly proud of the awareness panels he’s created, which have highlighted such issues as human trafficking, autism, cancer and ALS. Many of these have been made in collaboration with others. “I’ll draw it and they can paint it. I’ve had kids as young as six paint them.”

It takes him about an hour to do one full piece, usually two to five feet wide and six feet tall. “Most of what you see is not freehand drawn. I create it in Photoshop and then project it on whatever I’m using. Then I pencil the image on in layers, then paint,” he says. “I’m constantly trying to come up with shortcuts and ways to make things faster. For me, it’s all about speed.”

Sonksen creates the panels in his garage, using reclaimed fence he gets for free from fence companies, saving them a trip to the dump. He gets free paint from the transfer station. You might fancy him an environmentalist with this upcycled approach but he’ll tell you honestly it’s really about saving money.

After completing the artworks, he drives them to the trail in his truck and screws them to existing fence. “I’ve also installed full fences once the posts were put in.” There’s a 200-foot span of paintings north of E.E. Williamson that Sonksen installed with the homeowner’s blessing and a small financial reward.

Besides the trail paintings, Sonksen estimates he’s got hundreds in storage, some on traditional canvas but many on plywood and fence pickets. “I used to sell art at a local gallery but it didn’t seem worth it to me. I feel like people want to look at artwork, but they don’t like to buy it. So I’m on a mission to put art anywhere I can. I’m doing public art, but against everyone’s will. Hopefully it will pave the way for other artists.”

He’ll paint a building, sometimes without permission. “I do it so fast that people can’t stop me. And I’m done by the time people find out about it.” You can check out his 13-foot tall great white shark on the side of Fishy Business Aquarium in Longwood. “He came in and offered to do something for free and we were like, ‘go for it. ‘We ended up giving him a few hundred bucks,” says Doug Yaxley, manager at Fishy Business. You can also see his city-sanctioned Bob Marley mural near the welcome center in downtown Sanford.

Sonksen also has done what he calls Pop Up Art, where he’ll place a piece by a busy intersection, like the Wonder Woman painting he had up at the Longwood I-4 exit. The quote underneath said, “All women are wonderful.”

“I don’t consider myself an artist. I’m just a carpenter that when the housing bubble burst, out of frustration, I just wanted to irritate people,” he says. “I would hang up a painting, giggling the whole time, but people were liking it. I never meant to go this far but it was so fun, exhilarating, so I just stuck with it.”

He plans to stick with it quite a while longer: Sonksen says it it will take at least 20 more years to finish the 5 miles of trail between E.E. Williamson and Lake Mary Boulevard.

“I’m just blazing a trail and leaving painting in my wake,” he says.