For nine overachievers, life is about meeting their goals and going on to greater accomplishments. Sleep is optional.

Some people dream of doing big things while others live their dreams to the max. On the following pages we profile people who fall into the latter group. They are über-productive powerhouses who spread themselves across a range of personal, professional and philanthropic endeavors, all the while raising the bar on the meaning of success. 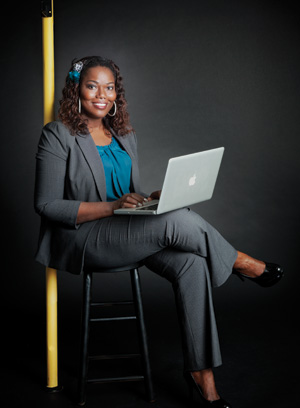 MARY SPIO
Current pursuits… founder and president of Next Galaxy Media, a technology company that produces, distributes and markets digital media. Crowning achievement… at age 29, she engineered Boeing Digital Cinema’s technology for delivering videos and movies via satellite to movie theaters around the world; she holds multiple digital-cinema patents. She also… founded and manages One2OneDates, an online matchmaking service, and recently designed the mobile app for it. As if that wasn’t enough… she recently wrote a nonfiction history book called A Song for Carmine, which will be released in February. Her give-back… Spio, 39, is the founder of engineer.tv, a nonprofit that brings engineers and companies together to inspire students to pursue engineering degrees. “I believe I have been successful because I am a lifelong learner. I am always in someone’s classroom, always seeking great people to learn from. Mentors have been my lifeblood,” says Spio, who last year was named by NBC News and TheGrio as one of the “100 History Makers in the Making” along with Jay–Z and Oprah Winfrey. These days she balances her time between nurturing her 1-year-old son, Prince, and creating viral videos for clients such as Coca-Cola and Toyota. The key to her achievements… has been tenacity. “Every stumbling block should be seen as a stepping stone—an opportunity to learn, expand and grow.” 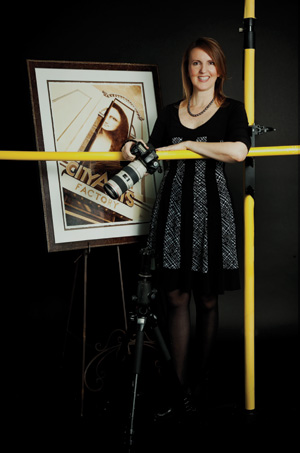 BARBARA HARTLEY
Working… executive director of the Downtown Orlando Arts District. Giving… she has been a member of the Junior League of Greater Orlando since 1997, is a trustee on the American Advertising Federation of Orlando, raises funds to support an annual Rollins scholarship in her late husband’s name, and serves on the ambassador team of the Orlando Regional Chamber of Commerce. She also attends more than 60 Orlando-area fundraising events a year. She recharges by… doing yoga several times a week and pursuing her passion, photography. She’s adventurous… “This year I went hang-gliding at Wallaby Ranch [in Davenport]. I took surfing lessons last year. Next is paddle boarding.” Hartley, 46, is also a huge proponent of lifelong learning. She regularly takes classes at Rollins College’s Philanthropy & Nonprofit Leadership Center. “I try to live my life by the golden rule,” she says. “The best way to be successful is to just be good to people.” 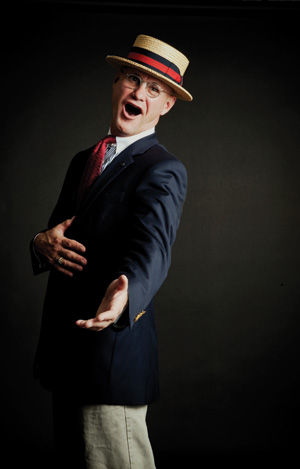 FOSTER LANENGA
Occupation… co-founder and owner of Farris and Foster’s Famous Chocolate Factory in Baldwin Park, Dr. Phillips, Waterford Lakes and Lakeland. Personal passions… singing with Orlando’s Harmony Society, a barbershop quartet, collecting antique cars, playing the banjo, ballroom dancing and singing opera. Extra credit… he’s also a scoutmaster with the local Boys Scout troop. His approach to life… is daring and gutsy, he says. “Some people are just too cautious in my view. I say jump in. If it doesn’t work out the first time, jump again.” What, him worry?… Recession notwithstanding, this jumper opened two more locations of his  “chocolate factories” in the last 12 months. Order a barbershop valentine through Orlando’s Harmony Society this February and Lanenga, 57, just might be the crooner who shows up at your door… chocolates in hand, of course. 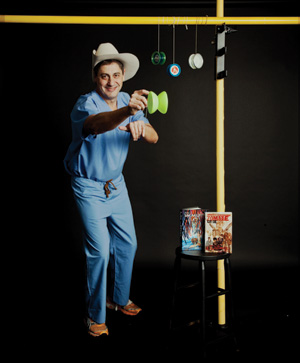 LUCKY MEISENHEIMER
Claim to fame… holds the Guinness World Record for the largest yo-yo collection. Passionate pursuit… a competitive swimmer, Meisenheimer, 54, hosts Lucky’s Lake Swim, a 1-kilometer open-water swim behind his Dr. Phillips-area home on Lake Cane. The swim is held six days a week all year long. Publishing pursuits… he’s written a science-fiction thriller, The Immune, as well as a book about zombie terminology and Lucky’s Collectors Guide to 20th Century Yo-Yos. If all of that is not enough… he owns a small film production company, Lucky-Rose Films, which has churned out several TV commercials, pilots and featurettes. Oh, and he’s also… a dermatologist and surgeon. “This is America and you can do whatever you want in America,” he says. If his acting skills or writing talents fail to impress you, the more than 100 yo-yo tricks he’s mastered surely will. 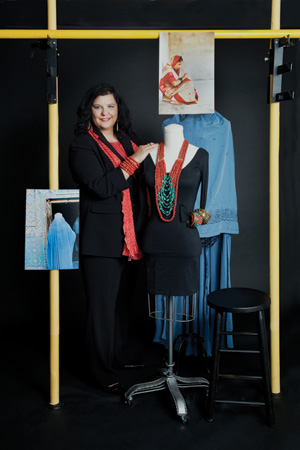 DEBBIE FARAH
Day job… CEO and founder of Winter Park’s Bajalia Trading Co. and Bajalia International Group, for-profit and nonprofit companies, respectively, that help women around the world bring their goods to market here and abroad.  Accolades… in 2011 she was named one of the “150 Women Who Shake the World” by Newsweek-Daily Beast. Talents… speaks four languages, avid photographer and painter. Give-backs… serves on several non-profit advisory boards including the Business Council for Peace. Side projects… she is writing a book based on her experiences with helping women around the world, and she mentors women in the ATHENAPowerLink program in Rollins College’s Center for Advanced Entrepreneurship. “I believe we are blessed so that we can bless others,” says Farah, 53. Meanwhile… When she’s not traveling the world or headed to St. Petersburg to sell her designer goods on the Home Shopping Network, the social entrepreneur is teaching and mentoring up-and-coming designers. 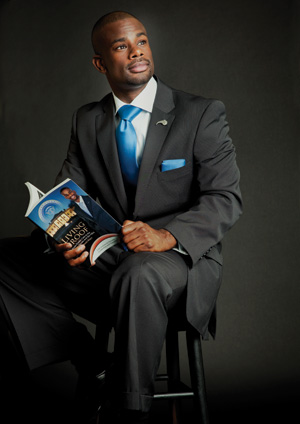 LUCAS BOYCE
Big break… a photo op with President George W. Bush in 2002 led to a job at the White House, working in the Office of Public Affairs for six years. Current day job… Orlando Magic’s director of community relations, multicultural insights and government affairs. He’s also… the author of the autobiography Living Proof: From Foster Care to the White House and the NBA. And in his spare time… he’s at Rollins College nearly every Saturday pursuing his MBA or traveling the country delivering motivational speeches. He gives about 80 a year. “I’m definitely motivated by achievement,” says Boyce, 32, who was recently named 2011 Outstanding Male of the Year in Orlando Business Journal’s  “Forty Under 40.” He’s goal oriented… At 18, he had three goals in his sights: to work at the White House, fly on Air Force One and work in the NBA. He accomplished all three by the time he turned 29. 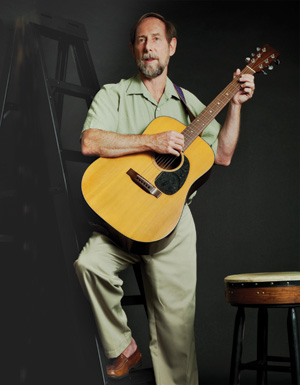 CHIP WESTON
Profession… course director at Full Sail University and the owner of Chip Weston Studios, which, among many things, does international consulting in the field of psychographic analysis of online user behavior. Philanthropic focus… serving on the Florida Council on Arts and Culture, a 15-member advisory council to the secretary of state, as well as a board member on the Florida Alliance for Arts Education. In his downtime he… reads books on quantum physics just for kicks, plays guitar and hand drums with a local band called Angela and the Gazebros, which plays every Tuesday night at the gazebo at College Park’s Albert Park. How he stays focused… “The most important thing I do every day is meditate,” says the 63-year-old self-taught artist who’s been a member of the McRae Artist Studios for 22 years and frequently exhibits his work locally and beyond. “I’m pretty careful about what I bring into my existence. It helps me create the space to do a lot of things.” 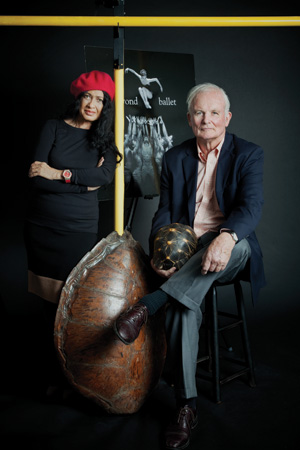 SIBILLE AND PETER PRITCHARD
Her work… senior vice president for Brooksville Development Corp., a real estate developer. His work… he’s an internationally acclaimed turtle expert and founder of the Chelonian Research Institute, a turtle museum/sanctuary in Oviedo. It houses the third largest turtle specimen collection in the world. Further endeavors… she’s the chair of the Global Perspectives Foundation and chair of the Sibille H. Pritchard Global Peace Studies Fellowship at UCF. He’s an adjunct professor at UCF and the author of 12 books, including his memoir. Philanthropic undertakings… she’s a board member for the Florida Alliance for Arts Education, an executive board member of the Dr. Phillips Center for the Performing Arts and president of the Orlando Ballet. He participates in at least six different global conservation projects at any time. How their marriage works… “We have very different interests and we keep our own specialties, but we both are people who are passionate about people,” says Sibille, 66, who travels abroad with her husband of 40 years at least two to three months out of the year. His personal dedication… “I always want to go to work,” says Peter, 68, a former Time magazine “Hero of the Planet.” “Not everyone is fortunate enough to have a job that they really like.” Work for Peter is located 20 steps from home, one of the oldest houses in Oviedo, built in 1884.