Q: Did serial killer Ted Bundy carve his name into a courtroom table during his trial in Orlando?

A: Visitors to the Orange County Regional History Center have no doubt noticed the massive wooden table in the restored courtroom on the third floor. Protected beneath a sheet of plexiglass on one corner is Bundy’s name, supposedly carved by the killer while he was being tried in 1980 for the murder of Lake City middle-schooler Kimberly Leach. 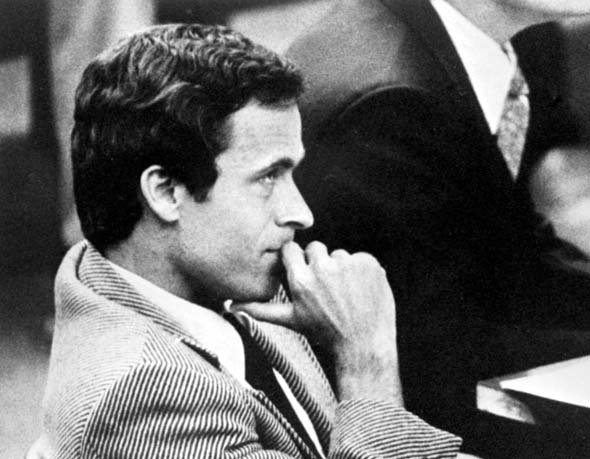 First, Bundy wasn’t tried in that building—which was the original courthouse, built in 1927—but rather in the adjoining courthouse annex (an ugly turquoise building since razed). But could that table have been in the annex at one time? Not likely, says Tana Porter, the history center’s former research librarian: Photos from newspaper clippings show that the modern style of furniture used in the annex was nothing like the early-20th century heavy wooden table that bears the carving.

Another argument against the theory of Bundy-as-woodcarver comes from one of the men who defended him: then-public defender Lynn Thompson. Now in private practice in Crawfordville, south of Tallahassee, Thompson says he doesn’t recall he or Bundy ever being in the old building, even for an arraignment. And besides, “I sat beside him pretty much the whole time, and I think I would have noticed if he was scratching something on the dadgum desk.’’ Security at the courtroom was tight: Bundy, who was eventually linked to the deaths of at least 30 young women and girls, had escaped from Colorado jails twice before, so he was being searched thoroughly and watched closely.

The carving was noticed only after the history center moved into the old courthouse in 2000. That’s because visitors started defacing it, recalls Mike Perkins, the museum’s curator of exhibits. Not knowing at the time whether the carving was genuine, the museum repaired the damage around the scrawled name, then installed the protective plexiglass “just in case,’’ Perkins says. “Because if it were the case, it’s not something we’d necessarily celebrate, but it would be a piece of history.’’ Today, when visitors ask about the carving, museum workers tell them “it’s very unlikely’’ that the scrawl was that of the infamous killer, Perkins says.

So if Bundy didn’t cut into the table, who did? It’s doubtful that workers who restored the courtroom would have been involved, since their main job was to preserve history. Perhaps a visitor, aware that Bundy was tried in the general vicinity, was trying to be funny. However, because the courtroom was still being used for lesser cases even after most proceedings moved to the annex, Perkins says his “gut guess’’ is that somebody on trial long after Bundy passed through decided to be clever and used something, perhaps a paper clip, to inscribe the name. And thereby carved his or her ignominious place in history.

Which would seem to settle it. Except for this: Shortly before his execution in 1989, Bundy confessed to having killed eight women in Utah, burying at least one of them in Sanpete County. That same year, Sanpete sheriff’s deputies scouring a 60-mile area for remains of possible victims reported finding 10 trees with Ted Bundy’s name carved into them.

“I feel many of them are copycats,’’ an investigator told reporters at the time. “But I think that one or more may have been done by Bundy.’’

This article appears in the April 2013 issue of Orlando Magazine.
Categories: Community