At Ten10, they know your name—and how to create some killer brews.

If passing a pint of freshly brewed beer across a counter can serve as a handshake, then the folks at Ten10 Brewing Company are outstanding at welcoming folks to the Mills 50 District. The idea of a neighborhood bar is well worn—the “place where everybody knows your name.” But the idea of a neighborhood brewery? That’s still pretty new everywhere, and especially in Orlando. When owners Mike Wallace and Patrick McPherson set out to open Ten10, that’s exactly what they wanted.

What’s the difference between a neighborhood bar and a neighborhood brewery you might be asking? Well, on the surface, the exterior of both edifices may look the same, save for the large brew tanks. You’ll see booths, high tops, and bar stools. You’ll see sleek décor that combines the fresh look of stainless steel and the domestic look of natural wood. You’ll see TVs and chalkboards scrawled with daily specials and offerings. What gets consumed is what sets Ten10 apart—the unique ability to control the product at each level, form a repertoire with the taste preferences of patrons, and make each glass a true representation of a passion for brewing beer. You can find a Heineken anywhere. An imperial coconut chocolate milk stout named “The Harder They Fall”? Probably not. 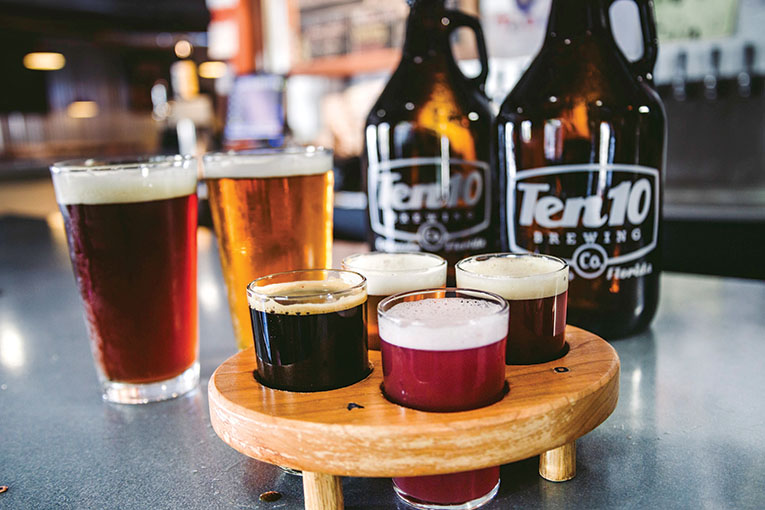 “Someone said to me the other day that the brew pub is quickly becoming the new sports bar, in the sense that people can come here and get something different. They never know what’s going to be on tap,” Wallace, co-owner and brewmaster, says. “If you look at restaurants like The Ravenous Pig, they’re offering the same type of thing. It’s the creativity, they’re playing around and doing cool stuff. You may see a burger and fries on the menu, but it will be special, you know?”

The curiosity and creativity that comes with mixing flavors, ingredients, and techniques always intrigued Wallace. In fact, he started brewing beer at home in high school after he found out that it was easier to buy beer ingredients than the beer itself. From then on he was hooked, brewing at the long since closed Hops at the age of 21, working in sales and distribution for the better part of a decade, and finally starting his own operation.

“When I was growing up, we would go other places to bring beer back. We couldn’t get what we wanted here,” he says. “So I feel like we’re doing our part to help Orlando diversify.”

​Ten10, named after its address on Virginia Drive, is a nod to the neighborhood. That sense of community compels Wallace and McPherson to keep working and collaborating. The pretzels on the menu come from Olde Hearth Bread Company and are made with spent beer grain from Ten10. The labels on “The Harder They Fall” were designed by Lure Design Co., directly across the street. And the inventive brews, like the Sundae Best (Neapolitan Brown Ale), I Totally Can’t Even (Coffee Pumpkin Ale), and One True Zaa (Pineapple Jalapeño Ale), are the fruits of passionate conversations with customers who keep encouraging Wallace and company to push the boundaries and test their taste buds.

Part of building a community starts with a place to gather, have a drink, and talk about common interests and the things you want to see improve around you. If you’re looking for a higher standard of beer made by the friendly faces who care about what you’re drinking and how you’re doing, go to Ten10.