The flavor of an ‘old favorite,’ simple yet imaginative. 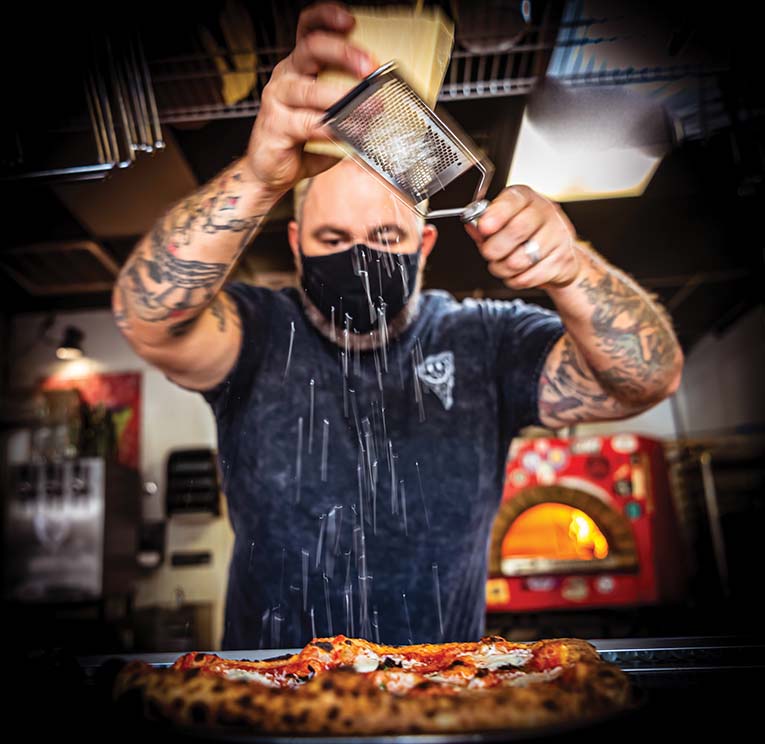 That’s not an accident, according to Bruno Zacchini, chef-owner of Pizza Bruno. “When we bring new hires on, I tell them, the whole place is intentional…[because] when the pizza is good, and the music is good, and everything is lining up—that’s the memory.”

Zacchini opened the restaurant on Curry Ford Road in 2016 after a stint as chef consultant for Third Wave Cafe in New Smyrna Beach, where the menu featured Neapolitan pizzas and other wood-fired cookery. He enjoyed the work initially, but between his long commute from Winter Park and the fact that the menu ultimately didn’t allow for much creativity (the tourist-heavy crowd favored traditional flavors), he decided to open his own place. “I thought that Orlando could use a really cool pizza shop that was doing not necessarily Neapolitan pizzas, but in that vein, that are fun, a little different, a little more technique- and ingredient-driven,” he elaborates. It wasn’t an easy decision. When Zacchini opened, “I had $700 to my name,” he shares.

As for the pizza, Zacchini cites the new Neapolitan scene, specifically in Brooklyn, as laying the groundwork for his vision. He bakes his pizza in a hardwood-fueled Pavesi oven at extremely high heat for about 90 seconds to achieve the characteristic char on the sourdough crust, which provides just the right amount of chew and tang. The ingredients? He keeps them simple, in line with his culinary philosophy. “Let the ingredients work if they’re good. Just don’t mess them up,” he says. 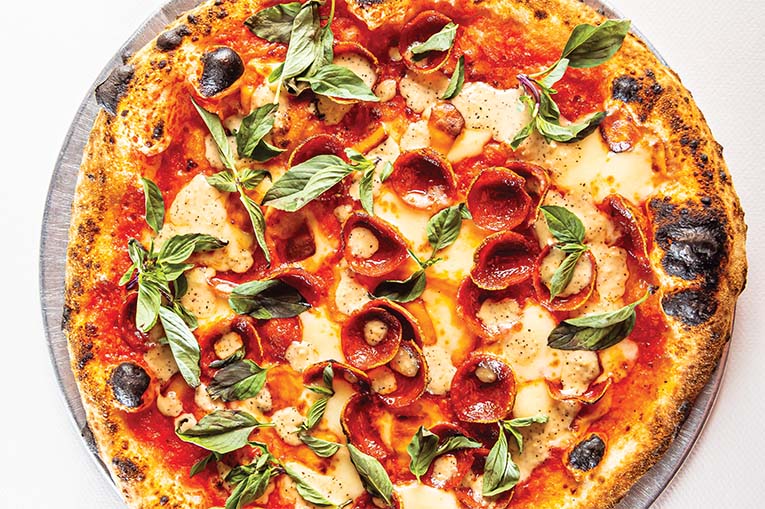 While toppings may be simple, the combinations are often imaginative. Sure, Pizza Bruno has a classic pepperoni pie. But when was the last time you went into your neighborhood pizzeria and ordered a Crimson Ghost, featuring creamy, fresh mozzarella complemented by soppressata, basil and Mike’s Hot Honey? Or maybe you’d prefer a KBar, with mozz, fontina, Italian sausage, mushrooms, double garlic, rosemary, sauce swirl and black pepper.

Whatever you do, don’t forgo the fist-sized Garlic Knots, which are practically rich enough to serve as an entree.

Fans of Pizza Bruno know that something else makes the pizzeria unique: In a world where pizza is synonymous with takeout, Chef Bruno prefers that guests sit down and stay a while. Prior to the dawn of COVID-19, Zacchini wasn’t a huge fan of takeout; he just didn’t feel that it would give his customers the best Pizza Bruno experience. “Don’t have me put something in a box, and I know the quality is going to drop. That’s not a fair judgment of what we’re trying to do,” he explains.

But necessity is the mother of invention, or at least of adaptation. If the business was going to survive the closures and economic slowdown that the pandemic wrought, he had to reconsider offering takeout and take steps to make it the best that it could be. Now that the dining room and patio are once more open (at reduced capacity as of press time), Zacchini’s immediate expansion plans include a dedicated takeout space adjoining the existing shop—complete with the installation of a second Pavesi oven to meet increased demand—so that he can efficiently offer takeout alongside dine-in. “We’re hoping for a December launch, fingers crossed. Might be January,” he shares.

Although times are challenging, he sees a bright future—mostly from the glow of all the irons he has in the fire, it might seem. There’s the catering business, still going strong, and he’d like his own event venue. He also wants to explore other culinary concepts. “Our pasta program—I’d love to port that into its own entity.” He enjoys offering a weekly Pasta Night but believes there’s demand for more. “I feel like it could be better if we did it every single day of the week,” he says.

“And yeah, more Pizza Brunos will probably happen. I could foresee that happening.” pizzabrunofl.com

This article appears in the November 2020 issue of Orlando Magazine.
Categories: News and Features
Tags: best, bracket, challenge, champion, Orlando, pizza, pizzeria
Want to read the whole issue? Download and read this issue and others on Magzter.