Pizza Bracket Results: Meet the Rest of the Original 32

Meet the Rest of the Original 32 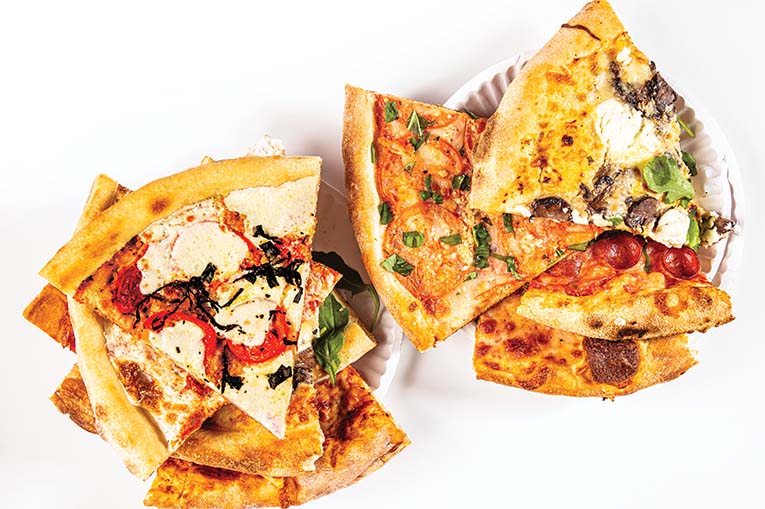 Named for their address on Winter Park Road, this neighborhood spot has garnered rave reviews for their varied pizza menu, which includes vegan options. Save room for their tempting roster of desserts as well—the Brownie Bombon is a favorite. 1803pizzakitchen.com

A fixture on 17-92 in Casselberry since 1988, Anthony’s specializes in New York-style pizza, but also offers a myriad of styles, from tomato pies and stuffed pizzas to Sicilian-style as well as calzones and stromboli. A number of their most popular specialties are available by the slice as well. papaanthonyspizza.com

Specializing in Neapolitan cuisine, Armando’s takes special pride in their pizza. While you can’t go wrong with a simple Margherita, lovers of sweet and savory will be tempted by the Prosciutto E Fichi featuring prosciutto, fig jam and gorgonzola. Three locations in Winter Park, College Park and Lake Nona. armandosorlando.com

Located in the Conway area, this neighborhood favorite serves up a wide variety of specialty pizzas, including the Eggplant Rollatini featuring eggplant and ricotta cheese, and a Cheesesteak Pizza with steak, onions and peppers. For a portable take on your favorite dish, check out the Pizza Sub. mybellapizza.com

Blaze Fast Fire’d pizzas come to you in a flash, thanks to their super-hot ovens. Select from specialties or create your own on their assembly line, and have your pie in 180 seconds. Three locations, in Winter Park and Disney Springs and across from UCF. blazepizza.com

Located on Lake Howell Road in Winter Park, Boardwalk Pizza offers several specialty pies, including a deep dish pan pizza with a crust bathed in garlic butter and herbs. Opt for the Chicken Florentine for a lighter take on a traditional slice. boardwalkpizza.com

First opened in the Hourglass District in 2018, F&D Woodfired has recently expanded to a second location in Longwood. The Due Carni receives rave reviews, while vegans find a good selection of options made with Beyond plant-based proteins. fdwoodfireditaliankitchen.com

Specializing in Brazilian pizza, this local favorite with spots in Orlando and Kissimmee offers its thin-crust pies with an array of traditional Brazilian toppings, from corn and hearts of palm to Catupiry cheese. Save room for their Sweet Pizzas featuring fruit, cheese, chocolate, dulce de leche and more. piefectionorlando.com

Don’t let the fun, old-timey newspaper theme fool you: This is delicious pizza. Start at the press at the front, and choose either build-your-own or specialty pies, named for famous American newspapers, such as The Sun, featuring ham, bacon, sharp cheddar, pineapple and more. Don’t skip the Garlic Cheesy Bread, which is basically a white pizza with sauce for dipping. Locations in Celebration and Winter Garden. thepizzapress.com

A mainstay of Colonialtown, family owned and operated Pizzeria Del-Dio’s history began in Brooklyn, before the original owners relocated to Florida in 1994. Order a split specialty pizza to please everyone, or opt for the heart-shaped pie to romance your pizza-loving honey. pizzeriadel-dio.com

Prefer your pizza with a side of nostalgia? Then head to Retro Station, the winner of the Readers’ Choice Award for best pizza in our recent Dining Awards. The interior recalls the 1950s while some of the specialty pizzas have a decidedly Brazilian flair. The Portuguesa, for instance, is loaded with tomatoes, black olives, onion, ham and boiled eggs. retrostationrestaurant.com

College Park locals in the know swear by Tornatore’s and their complete “scratch-made” menu of specialties. Want gluten-free or cauliflower crust for your Diesel or Joe Gibbs Pie? No problem. tornatoresitalianrestaurant.com

Blink and you might miss Vines & Forks on Fairbanks Avenue in Winter Park. Previously known to most of us as The Wine Barn, the restaurant-inside-a-wine-shop turns out some of our favorite pizzas in Central Florida. While the Piemonte has long been a fan favorite, try the Bacon Mojito with pork belly bacon, peaches, chevre and asiago, drizzled with a rum balsamic glaze during your next visit. vinesandforks.com

Our Sins of Omission

The grousing on social media began the minute the 32 pizzerias selected for our Pizza Bracket Challenge were posted. It went something like this:

How in the hell is (fill in the blank) not on there?

Well because we had only 32 slots available to present to readers for their brackets. Next time perhaps we go with 64. Or 128. Or 256.

Seriously, as is the case with the most famous bracket of them all, the March Madness NCAA basketball tournament, some places were left off. In picking the 32, we considered our staff’s assessment (from having actually eaten the pizzas), plus reputation, and the opinions of serious foodies as well as typical diners. Also, we included a few chains, which some folks didn’t care for—but if we had left them off we would have heard about that too.

So allow us to present some of those not selected for the bracket but pizza makers certainly worthy of your patronage, if their vocal fan bases are any indication:

Okay, okay, we surrender. Next time: bracket of 64.