Pizza Bracket Results: Meet the Other Two in the Fabulous 4

Meet the Other Two in the Fabulous 4 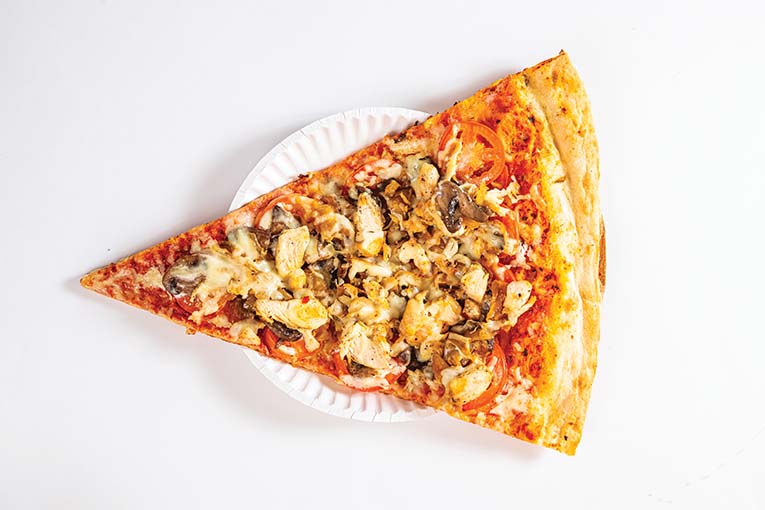 (ALL PHOTOS BY ROBERTO GONZALEZ)

Eye-popping size but a massive taste too. By Barry Glenn

They are gentle giants, so huge that adults and kids alike snap pictures with them to post on social media, like families vacationing amid a grove of sequoias.

We’re talking about the creations at Lazy Moon Pizza, where massive slices overhang metal serving plates like Dali-esque artworks. But those are nothing compared with the pizzeria’s 30-inch flying saucer of a pie, which really should require some sort of federal permit to transport. It won’t fit in the back or front seat of a vehicle; the only way to get the beast home or to the office is by squeezing it into a car trunk or letting the seat down in an SUV. Then you must turn the product sideways to navigate the doorway of your destination, before finally presenting it to awestruck family members or co-workers who stare, mouths agape, into the open box, and wonder “What hath God wrought?”

Good pizza, that’s what. For all the emphasis on size (even individual to-go slices have their own cardboard carrying case), Lazy Moon uses a variety of uncommon sauces and toppings to produce flavorful pies that hold their own against any in town.

Florida State grad students Tim Brown and Matt Griffis opened the first Lazy Moon in 2004 across the street from UCF, before moving to the current location in a strip mall just down University Boulevard. They expanded to the Mills 50 District on Colonial Drive four years ago.

Lazy Moon’s most popular slice is probably Jason’s Mom’s (chicken, sautéed mushrooms, caramelized onions, tomatoes, baked ranch, baked Jason’s Mom’s sweet-spicy sauce). Another crowd pleaser is the Down Home (barbecue sauce, chicken, red onions, bacon and mozzarella). There’s even a vegan chili slice. Meanwhile, the choose-your-own toppings are endless, so you can enjoy just a plain old pepperoni pie. Calzones, salads, soups and craft beer also are on the menu. And, yes, they do have a reasonable-looking 20-inch pizza.

But back to that 30-inch UFO: Apparently nobody has ever consumed one in a single sitting (at least in public), although a few duos have allegedly tag-teamed to accomplish the feat.  And if you’re popping in for a quick lunch and think you might be able to scarf down two slices, remember: Your eyes are always bigger than your stomach. lazymoonpizza.com 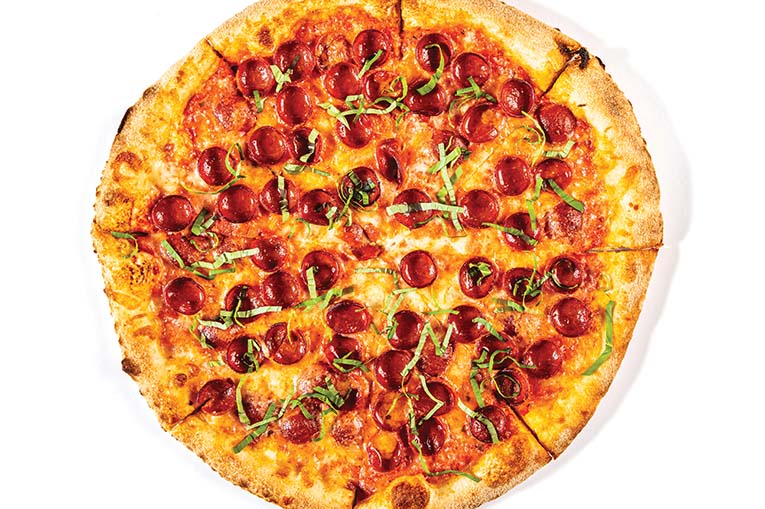 A sauce so straightforward it’s created without fire. By Megan Stokes

When Greg Gentile entertains at home, his go-to dish to serve is smoked salmon, a baguette, Mascarpone cheese and red onion on a platter. As owner of Antonio’s in Maitland, he realized he should be serving this to his guests there as well. When it began flying off the shelves as an appetizer, Gentile thought, why not make it a pizza?

The Smoked Salmon Pizza is now a favorite in the casual café—a smattering of tables among shelves full of goodies for sale—that sits below the upscale dining area of the 30-year-old restaurant, which overlooks Lake Lily. Another favorite on their pizza menu is the Pepperoni. What sets it apart, according to Gentile, are the high quality, small spheres of pepperoni the restaurant uses, which curl into zesty cups when baked.  “I can’t give you a scientific reason why small pepperoni is better, but it is,” he says. Their Grilled Pizza with Gorgonzola and Figs is another interesting option, which Gentile says perfectly mixes salty and sweet.

Gentile says his secret to a top-ranking pizza pie is Antonio’s simple sauce recipe. He started cooking when he was about 8 years old and remembers his mother simmering tomato sauce for hours, adding sugar to balance the acidic taste. It wasn’t until he visited Italy as an adult that he learned that sauce made with high-quality tomatoes requires barely any cooking and never needs sugar; it’s often the overcooking that makes the sauce taste acidic. “I was learning to cook American Italian,” he says, adding that he fell so deeply in love with the food in Italy that it was hard to leave.

After opening the restaurant, Gentile spent years searching for the best tomatoes in California. He finally settled on a company offering such high-quality tomatoes that Antonio’s does not have to cook their pizza sauce. They simply add garlic and herbs and slather it on raw. “When you use the best tomato, you don’t need a lot of other stuff,” he says.

The restaurant sells 10 to 15 cases of sauce in jars ever week. They also sell anywhere from 50 to 60 frozen pizzas weekly, which, in Gentile’s opinion, is almost as good as their fresh pizzas. antoniosonline.com