They came true for Nick Goody of Orlando, the matter-of-fact kid who was coached by Mom and now pitches for the legendary New York Yankees.

Nick Goody was just a boy, about 8 years old, when his mother took him to his first spring training baseball game, treating him to the Atlanta Braves at Disney’s ESPN Wide World of Sports Complex. From the stands, Goody looked down at the living, breathing representations of the baseball cards he collected at his modest home in the east Orange County community of Union Park. The boy studied players like current and future Hall of Famers Greg Maddux, Tom Glavine, John Smoltz and Chipper Jones. 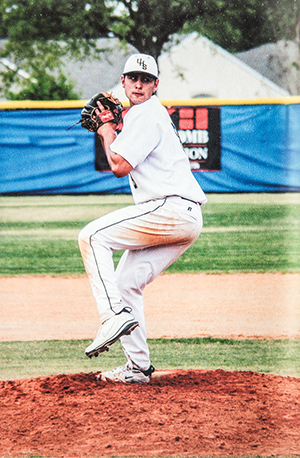 Instead, what struck Goody, even at such a young age, was the notion that he could one day be doing the same thing.

“I remember thinking: they’re playing a game and I can play, too. I was one of the better players on my Little League team. So why couldn’t I one day be doing the same thing they were doing?”

As he says this, Goody is wearing a New York Yankees uniform, standing on the artificial turf at Tropicana Field in St. Petersburg, readying himself for a game against the Tampa Bay Rays; a game in which he will pitch an inning of relief for the Yankees.

Twenty-five-years old now, Goody offers a wry smile at the naiveté of the boyhood memory.

“Of course, at the time I didn’t realize how much work went into it.”

The work has paid off in 2016, with Goody spending significant time pitching for the Yankees, working on his goal of becoming one of Major League Baseball’s best relief pitchers. Goody’s first call-up from the minor leagues to the Yankees came late in the 2015 season, and he struck out the first batter he faced. He has since shown the Yankees that, while he doesn’t have an overpowering fastball, he does possess an uncanny ability to strike out batters—a better-than-one-per-inning average. Still, it’s a journey, one that saw Goody persevere through ups and downs, including what men who throw baseballs for a living dread the most—Tommy John surgery.

At an early age, Cheryl Bunker saw in her son a boy who always approached things with a competitive zeal, displaying tangible athletic talent at a young age, but also something intangible that was perhaps equally as important, if not more so. Bunker taps her chest. “He’s always had a lot of heart, a lot of drive,” she says. “He has that burning desire.” 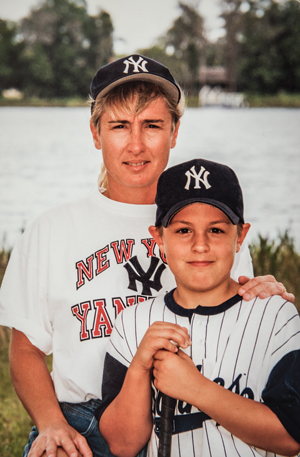 You wouldn’t know it to look at Goody. At 5-foot-11 and 195 pounds, he doesn’t strike a menacing pose on the pitcher’s mound. His face is cherubic, his eyes passively kind. And whether it’s a strikeout he records, or a home run he surrenders, Goody’s demeanor doesn’t change. He wears an expression perfect for a high-stakes poker game—or, better yet, a baseball relief pitcher for sports’ most iconic franchise.

“Yeah, he definitely has a poker face,” says his fiancée, Kate Yeakle, who attended the same east Orlando pre-kindergarten as Goody. “But I know when he’s upset. I can tell. He’s definitely hard on himself. He tears himself apart if he doesn’t pitch well. He tells me every day that he wants to be the best reliever in Major League Baseball.”

The couple’s wedding date is set for Nov. 20. Every night, they talk. It’s Goody’s routine to text her when the team comes into the clubhouse after games. But once, following a bad outing when Goody was pitching for LSU, and Yeakle was a student at UCF, she didn’t hear from him. She’d been watching the game with his mother and family, and knew things had not gone well. 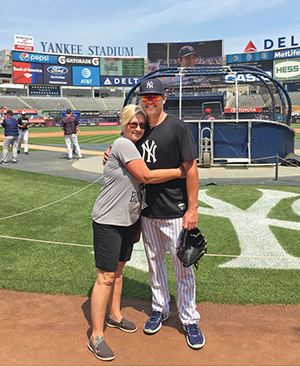 Goody with mom Cheryl Bunker who says, “I tell my best friend sometimes, ‘Can you believe it? Can you believe Nick is playing for the New York Yankees?’’’  (COURTESY OF CHERYL BUNKER).

“We nipped that in the bud real quick,” she says. “When I finally talked to him, I told him, ‘Look, your family, your mother and I, we’re here to support you. We’re here for you to talk. Don’t do this again.’ ”

The two have a rule now. Whatever happens that day, they talk it through, get it all out. And then, when the clock strikes midnight, they put it behind them.

They especially talked a lot in June, when Goody, after getting off to a solid start, struggled. That Orlando was going through its own struggles didn’t help. Goody followed the news reports from his hometown as if they were strikes one, two and three. First, The Voice singing sensation Christina Grimmie was gunned down at The Plaza Live theater. On the heels of that arrived the Pulse nightclub massacre, the deadliest mass shooting in U.S. history. Then came the coup de grâce, the terrible story of an alligator at Disney World dragging a 2-year-old boy into a lake, drowning him.

“People were asking me what was going on in my hometown, and I didn’t know what to say,” Goody says. “I was speechless. I didn’t know what to think, or what I could do. I just wish I could’ve been there to offer support, donate blood, something. It was definitely on my mind. This is not what Orlando is known for.”

If his career takes off, he wants to buy a home on one of Central Florida’s lakes (he loves to fish) and start a charity. “He’s just a solid, good person,” says Austin Romine, a Yankees catcher who has worked his way up the minor league ladder with Goody. “I’ve never known him to say a bad thing about anyone—on the field or off it.”

Adds Yeakle, “Nick is just a simple guy, good-hearted. He loves his family and friends. He’s the kind of guy who just wants to take care of people.”

Good-hearted? In recent years, and as recently as last year, Goody worked Amway Center concession stands during Magic games and concerts so he could raise money for his sisters’ traveling softball teams. 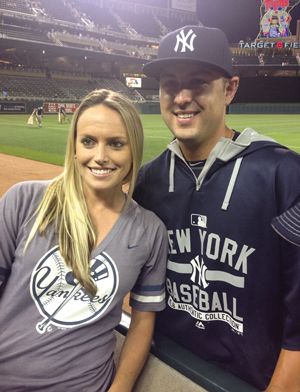 And simple? Goody proposed to Yeakle on May 8, 2014, at Clearwater’s Sand Key Beach. Afterward, the couple decided that the best way to celebrate was to order takeout Mexican and watch the NFL Draft. They had an abiding interest in it, after all. Goody grew up playing baseball with Blake Bortles, the Oviedo High grad who had just completed his UCF football career. Yeakle, now an athletic trainer at Rollins College, had graduated from UCF a year earlier and knew Bortles from being around the Knights’ training facility.

“Blake got drafted third by the Jacksonville Jaguars,” Yeakle recalls. “Overall, it was a really good day.”

Although Goody grew up playing baseball with Bortles, his mother forbade him from playing football. Cheryl Bunker knew sports, and she knew sports injuries. She grew up playing softball—occasionally crossing paths with Orlando softball legend Dot Richardson—and graduated from Colonial High School before heading to Austin Peay State University on a track and field scholarship. Injuries, however, waylaid her athletic career.

She knew, though, that she’d have to keep her son involved in something. As a boy, Goody was active, always needing to be in the middle of the action. But then, when Bunker saw Little League fathers favoring their sons over other boys, she decided to become a coach herself. She managed Nick in Little League and Senior League—until he started playing at University High School.

She smiles now, recalling how Nick’s first Little League team was the Union Park Yankees. And now? Bunker fights happy tears when she sees her son wearing a real New York Yankees uniform. “I almost have to giggle inside, otherwise I might start to cry,” she says, and then she does just that. “I tell my best friend sometimes, ‘Can you believe it? Can you believe Nick is playing for the New York Yankees?’ ”

It’s true. Though, not all the time.

The Yankees employ what is called the Scranton Shuttle, which is their way of transporting pitchers back and forth from their major league roster to their Class AAA minor affiliate in Scranton/Wilkes-Barre, Pa. Goody has taken that shuttle several times, with each ride back to Scranton posing a minor setback from which to return—and each time he does. When he was sent to the minor leagues last June, Goody responded with a strong statement in his first relief appearance by striking out six batters in two innings. A month later, he was back with the Yankees.

But then there was the major setback in 2013. During his first spring training with the major league club, Goody felt something tighten in his elbow. Suddenly, his velocity was down. An MRI confirmed the worst, a partial tear in his ulnar collateral ligament. He opted for Tommy John surgery—a procedure where the UCL is replaced with a tendon from elsewhere in the body. Through it all, he maintained his typical even-keeled Nick Goody demeanor, tweeting updates through his Twitter handle,  @its_all_Goody41, the cover photo of which shows a nighttime Orlando skyline across Lake Eola.

He was rehabbing at the Yankees’ facility in Tampa at the same time that the team’s iconic shortstop, Derek Jeter, was rehabbing from a broken ankle. Finding Jeter to be a regular guy, Goody approached him for an autograph; not for himself but for his mom. The next day, when Jeter walked in, Goody shouted across the clubhouse, telling Jeter that he had returned the favor, having left him a signed Nick Goody baseball cap in his locker. Jeter chuckled, flashing that toothy, first-to-third smile that makes women like Goody’s mother swoon.

He obviously felt comfortable being around, and kidding with, the future Hall of Famer. Just like he felt comfortable around those other future Hall of Famers all those years ago at Disney’s ESPN Wide World of Sports Complex—just a boy, believing that one day he could be one of those players he watched on that sunny spring afternoon, playing baseball.