Verse captures the encounters and thoughts of those who heal for a living.

The rhythms of life, the words that shed light on underlying truth—these are well-studied tools among physicians. And for some Orlando doctors, rhythms and words join forces and find their voice in poetry.

Physicians have a rich literary history—one you could say goes as far back as Apollo, the mythical Greek god responsible for healing and poetry. Local doctor poets represent a worldwide literary renaissance among physicians. 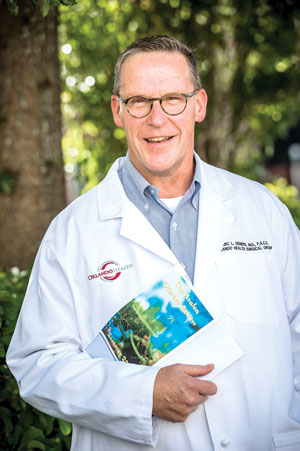 Dr. Joseph Sujka, a second-year surgical resident at Orlando Regional Medical Center, developed a love for writing as a young adult, leading him to become an English major as an undergraduate. He began with love poems for his then-fiancée. But poetry has become a way for him to process the hard realities he comes across as a doctor.

“You encounter something in medicine—a snapshot—and you need a way to capture that snapshot. There are times I’m working through something that I can’t fully articulate at the time. I try to put that to paper and work through that feeling. It’s cathartic,” he says. Sujka’s poem “Life’s Giving Beat” was published in Mace magazine, produced by St. George’s University School of Medicine, while Sujka was a student there.

About 10 years ago, his father, urologist Dr. Stan Sujka of Orlando Urology Associates P.A., found inspiration in his son’s writing. “I read some of his love poems, and I figured I had better start writing myself,” he recalls. “Physicians are well-educated. Most love the arts, and they simply gravitate to literature and poetry. For me, poetry is life, and life is poetry.”

Writing love poems as well as poems reflecting on medicine and the world around him, the elder Sujka is a member of the Florida State Poets Association. One of his poems appears in Chicken Soup for the Soul Celebrates Teachers: A Collection in Words and Photographs. Others have been published in Mace and, most recently, in the 2015 anthology Looking Life in the Eye: Poets of Central Florida Volume Three. Sujka writes daily. “I write because it feels good. I feel that poetry makes me a more intense observer of the world around me and as a result, a better physician.”

Before long, Stan Sujka inspired Orlando obstetrician and gynecologist Dr. Thomas Gibbs to begin writing. Gibbs considers himself an essayist for whom poetry is a means to an end. “I use poetry to help overcome writer’s block to find a way into the prose again. The prompt is to use the bones of a piece to create a word painting,” he observes.

His poem “Living Large” is about a homeless woman who lived on a corner near his downtown office. “My hope is that she finally would accept help and not feel disrespected. I am sure there was some degree of mental disability, but I admired her fortitude and sense of self-reliance.”

Surgical oncology specialist Dr. Marc Demers of Orlando Health Surgical Group made his debut as a poet in 2011 when his first poem—titled “Whipple,” about pancreatic cancer—was published in The Journal of the American Medical Association. The poem “deals with the occasional inability of physicians, a surgeon in this case, to overcome some illnesses, and how the relationship with the patient matures despite it all,” Demers says.

“I was writing poems in my head while driving around, so I thought, ‘Why am I not writing this down?’ ” he says. He often finds himself inspired while driving and will dictate ideas as voice memos.

“Surgical oncology can be grim, but can also be wonderful. People like me get to see people in moments of tremendous stress and how they’re able to respond to these things with dignity and courage. That’s incredibly moving. Physicians are continually exposed to people when they’re being horribly challenged. That gives us incredible depth of feeling if you allow yourself to be opened up to that.”

And a look at the worldwide poetry community will demonstrate that many doctors are, for the first time in years, opening up to such self-expression, as their peers have done for centuries. The 18th, 19th and mid-20th centuries were particularly notable for doctor poets, giving rise to such names as Oliver Wendell Holmes, John Keats, Anton Chekhov and William Carlos Williams, who won the Pulitzer Prize in poetry for his last book, Pictures From Brueghel, in 1963.

“He used to write poetry and prose between seeing patients,” shares Stan Sujka. “He would write poetry on prescription pads or any paper he could get his hands on.”

In 2011, Yale University School of Medicine and University College London Medical School sponsored a poetry contest for medical students with no expectation of serious interest. More than 160 students entered.

Physicians have slightly different takes on the resurgence of interest in poetry. “I think in a lot of ways medicine has become very calculated, very numbers-driven. A lot of medicine has this outlook that we are looking at numbers and not the patient. Sometimes there needs to be an emotional outlet,” says Joseph Sujka.

“I wonder if the problems we face as a society at this moment resonate among physicians more readily than in previous years,” Demers theorizes.

This heart, my heart
Inside my body’s core,
from its prebirth start
to its final beat.

Man’s best friend is not a dog
But rather this basic pump,
It asks nothing more from us
But to enjoy every life giving beat.

Ever in our chests,
It hardly conveys
its own importance.

Humble in its final beat
it lays still, lost from its repeat
conveying the culmination one life complete.

It will be his knee that helps the bone man
pay a bit of tuition,
for his advance is full wince and waddle.
Though on a wet day, a disc of some sort and the hip
will squeal as harshly.
Such a frame is stuff for aspirin and description
enough to weary the nimble.
His aches enjoy regard reserved for favored sons or baseball,
and so he drinks his tea with them alone.
Gone are the swell pals, new cleats, that college girl, the
first good check, the tang of rye.
All tucked into lifeboats and vanished horizons ago.
These few companions, this final boat will wait
and help him cross the rail and slip the davits
To a dim and yielding sea.

Long days jingle with change.
Burger and fries off the dollar menu.
Cigarette to stop the stomach’s roar.
Enough (not enough). Change.

A few more dollars could get her out of
the back seat of the Ford
and into a room with a bed.
Forecast: hurricanes, no rainbows follow.

No gold band. Only nicotine flamed fingers.
Time is pushing her.
Cliff in sight she asks, “How is everything?”
that servant's song.
A man waves. Over here. You.

A ball, a little
damson in a pinball machine.
Rest deferred,
she careens.
Dessert? No, thanks.

She tilts and I leave
nickels, dimes, quarters, and a dollar—

game over, no reset, next player.

Till the plug is pulled.