A few custom touches transformed this Winter Park home into an exquisite domain. 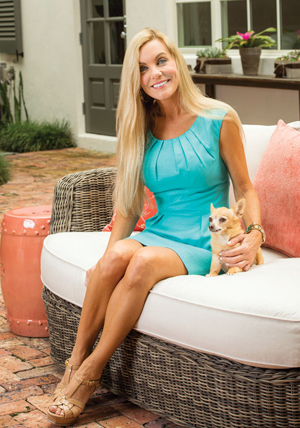 Joanna O'Shaughnessy and her dog, enjoy time on the enclosed patio off the family room.

When Joanna O’Shaughnessy moved into her Winter Park home, she didn’t want to fill her space with cookie-cutter furniture—she wanted items that were reflective of her personal style. With the help of John McClain Design, she was able to showcase her personality and transform her home into the domain of her dreams, without having to break out a hard hat.

It all started with a chair. “I was in the Hannibal Square area one day and I noticed this gorgeous chair right outside of a home décor shop,” says O’Shaughnessy. “When I walked into the store to buy the chair, I immediately fell in love with everything, and began chatting with the owner, John McClain.”

O’Shaughnessy, who has a love for all things floral and feminine, knew that her recently renovated home was laid out perfectly; it just needed a touch of her personality, which she wasn’t quite sure how to achieve. “After buying the chair from John, he personally delivered it to my home, and I was able to bounce some ideas off him about the vision I had for the space.” The two instantly hit it off, and McClain returned the following week to discuss the changes necessary to create what he calls “Joanna’s Adult Barbie Dream House.”

A Team Effort
When McClain had his first meeting with O’Shaughnessy to talk about the remodel, he discovered he wasn’t working with just one woman’s style. “My mother has a great eye for design, and I also really wanted the input of my 20-year-old daughter,” O’Shaughnessy says. “When John was able to listen to all three of our ideas and tie it into one concept, that’s when I knew that working with him was going to be the perfect partnership.” O’Shaughnessy’s main goals were to have a space that was bright and feminine, while being edgy and unique. “I’m used to designing with taupe and neutrals, but I knew that to achieve the vision I had, I couldn’t just play it safe—I needed bold colors.” 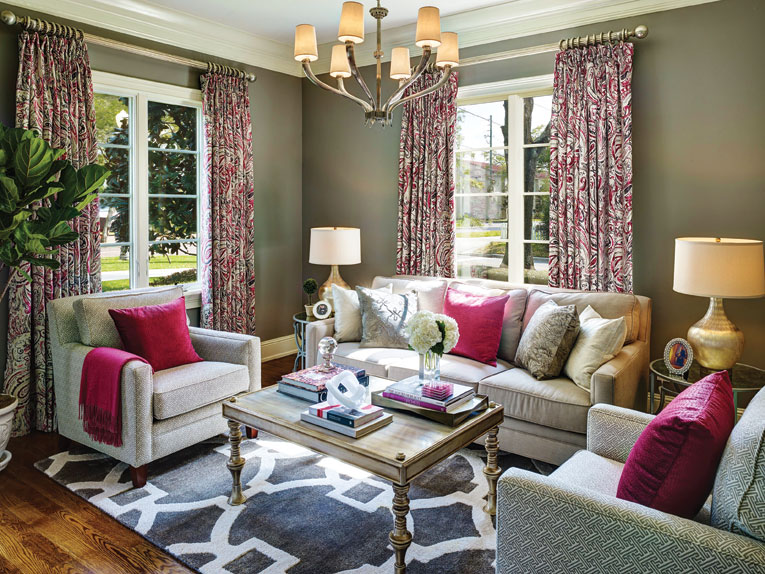 Finding Balance
“Just from looking at Joanna’s Pinterest boards, I could tell she wanted lots of pink and bright colors,” says McClain. “Because pink can so easily be perceived as a little girl’s area, I knew it was going to be a challenge to find the perfect balance between feminine and adult.” In the family room, he decided to use neutral shades for large items like the sofa and chairs, adding color with throw pillows and tabletop accessories. McClain incorporated pink and other bold colors using draperies with a “flame stitch” design that were folded into large pleats to
create a luxurious look.

“Joanna really wanted pink walls for her bedroom, but once we painted the room, it ended up looking like a little girl’s nursery,” McClain says. They took a different approach and “after finding a pink shade with more cream tones, the walls turned out gorgeous.” While the majority of the home is a mixture of neutrals and brights, McClain opted for a rich gray tone in the formal living room to add contrast. In order for the living room to flow with the rest of the house, he added bright pink pillows to the sofa, along with draperies that include pink, cream and gray stitching. 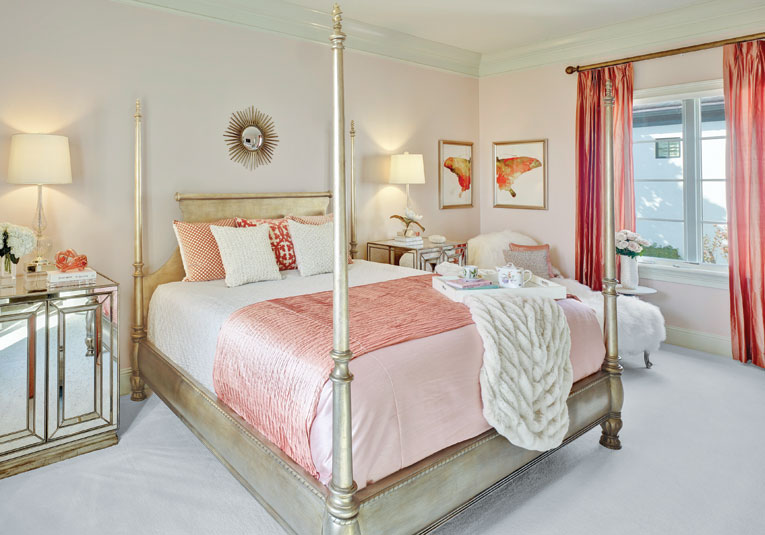 Custom Pieces
“I ran into some roadblocks when trying to find furniture that fit in my home,” says O’Shaughnessy. “John mentioned the idea of creating custom furniture that would fit perfectly in my space, while costing around the same as something I could buy in a store.” McClain first designed a bookcase for the family room. “I wanted to create a unique bookcase that would make a statement.” he says. “Luckily, Joanna was brave enough to trust my vision, and we were able to create a one-of-a-kind, octagon-shaped bookcase that became the focal point
of her family room.” 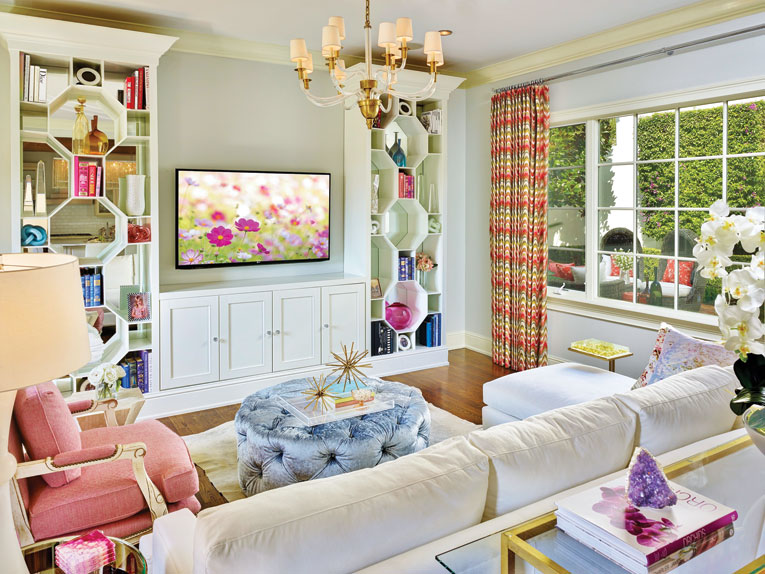 Since the home does not have a formal dining room, McClain chose to design a leather banquette that also acts as a cozy eating area just off the kitchen. Another piece of furniture was made with O’Shaughnessy’s dog, Gracie, in mind: a light blue ottoman using material that is easily washable. It doubles as a coffee table. One of O’Shaughnessy’s favorite custom pieces is a large, rectangular crystal chandelier that hangs above the bar between the kitchen and the family room. “The chandelier took a little over a month to create because each crystal was hand-tied around the fixture,” she says. It required three men to install once the ceiling was outfitted with special brackets to hold the weight. “The chandelier is the first thing people see when they walk in the house,” she adds. “Everyone kind of drops their
jaw in amazement.” 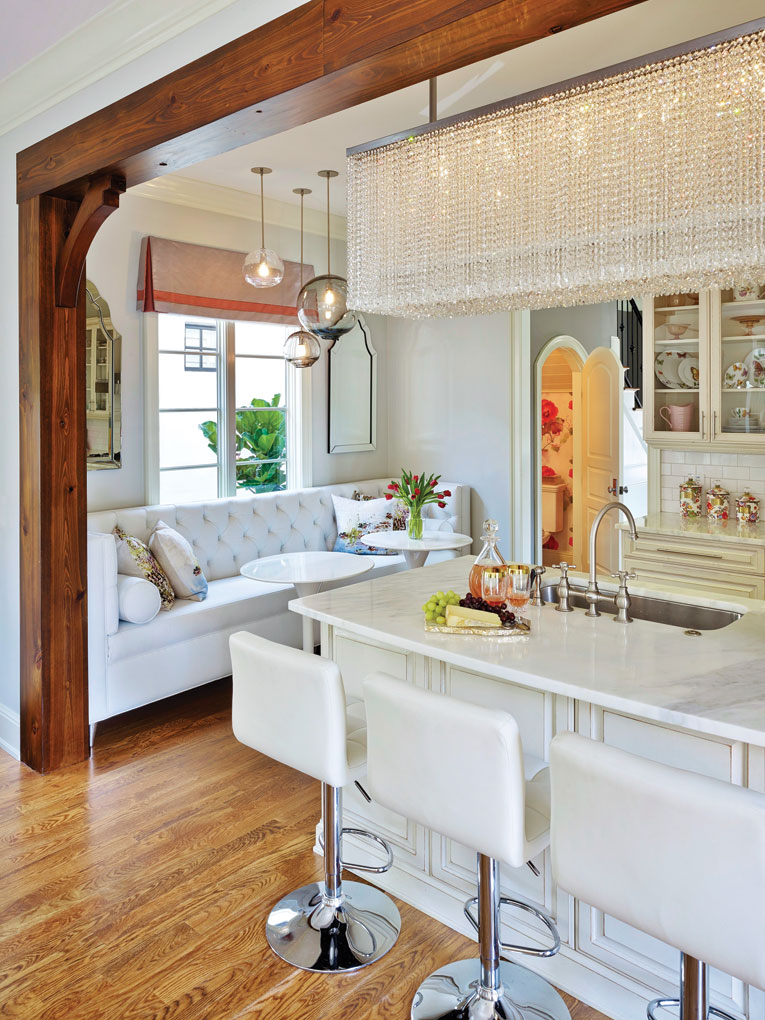 One item that was modified to fit O’Shaughnessy’s living space was the console table behind her sofa in the family room. “The console table we ordered ended up being too high, so we simply took the top off and added a long piece of glass,” she says. “It was an unexpected custom piece that now fits effortlessly in the room.” 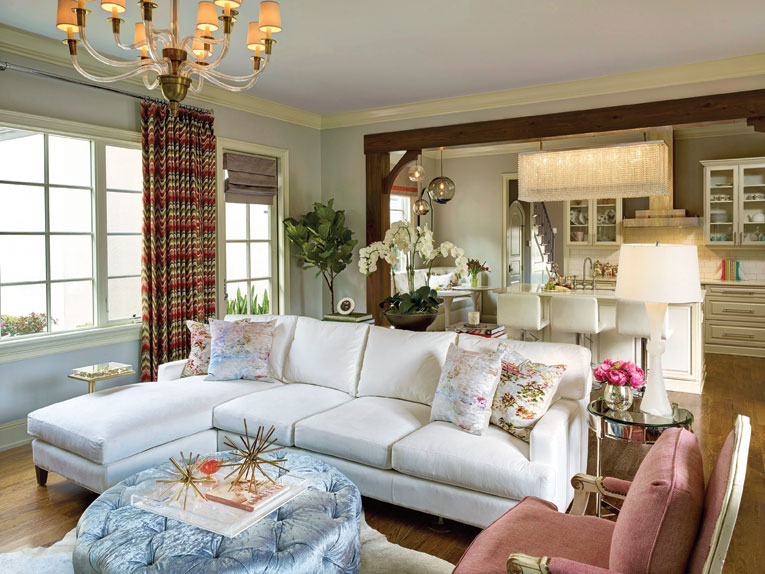 Items With Impact
“I knew going into this project that we were not trying to bake a cake here,” McClain says. “We were just trying to throw on the icing.” While O’Shaughnessy wanted to stay away from any large renovations, McClain was able to transform her home by adding some simple enhancements. “People are afraid of wallpaper for some reason, but it is one item that can create a huge impact on a space,” he says. To indulge Joanna’s love of florals, McClain chose a wallpaper of giant red and pink watercolor-style flowers for her downstairs powder room. “The wall covering almost looks like a painting, and it creates this dramatic yet feminine feel.” 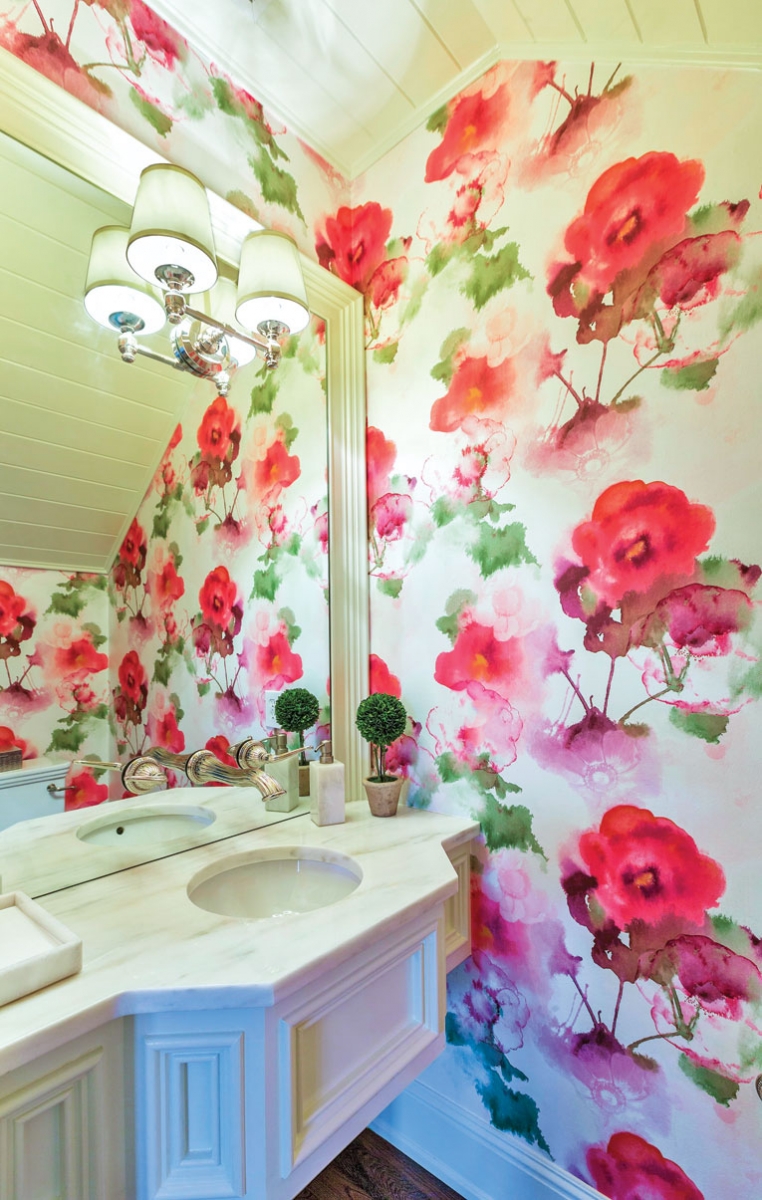 Another way McClain was able to make a statement and add hints of pink throughout the house was by utilizing accessories. The home’s bookcases are filled with numerous books in different shades of color. “The best thing about books is that they can be inexpensive, and you can colorblock them so they add uniformity throughout the house.”

He also placed unique items, in varying heights and colors, through the house—feminine touches like a pink champagne bottle on the bar cart, and flowers on almost every table. “I remember coming home after John had accessorized the house and everything looked so beautiful,” says O’Shaughnessy.

Beyond Home Décor
The remodel took approximately 5 months to complete. Because there were no invasive renovations taking place, O’Shaughnessy and her dog were able to live in the home throughout the entire process. While she considers herself knowledgeable in home décor trends, O’Shaughnessy believes that McClain and his company were a necessary factor in producing a space that reflects who she is. “Without John’s help, I would have never had the courage to make such bold choices,” she says. “Being able to have a home that brings me joy and showcases my personality
is truly a dream come true.” +

This article appears in the July 2015 issue of Orlando Home and Garden.
Categories: Makeovers