Providing eggs and entertainment, Orlando’s urban chickens apparently are all they’re cracked up to be.

Drop by Gabby Othon Lothrop’s  Audubon Park home some afternoon and there’s a pretty good chance you’ll find her in the backyard watching her clucking girls. Affectionately known as Princess Dominique Von Oreo; Scarlett, Duchess of Audubon; and Lady Godiva Leggington Lothrop, the three hens not only give Lothrop and her husband, Mike, endless hours of amusement—following her or her dog around the yard or cackling gleefully when they spy her in the window—but also dole out more than a dozen eggs a week.

“I started noticing the urban chicken trend nationally and realized that over 200 cities had ordinances that allow urban chickens,” says Commissioner Patty Sheehan, who spearheaded the push for an Orlando pilot program. She also helped school fellow commissioners on the myths and misconceptions of raising urban chickens, including the rooster factor (no roosters are permitted since they’re part of the equation only if you want to conceive chicks) and the threat of disease. "Migratory birds spread more disease than urban chickens,’’ Sheehan says. “I see this as a healthy movement that’s really good for our city.”

As the co-leader of Slow Food Orlando, which promotes healthy food from local farms and other providers, Lothrop is also a chicken crusader. “People are now starting to realize how messed up our food system is and are branching out on their own. Some people are going to do it by shopping a certain way or joining CSA (community supported agriculture), but urban chicken farming is another avenue to get closer to our food,” says Lothrop, an avid gardener. “Growing our own food has helped connect us to the process and it makes us appreciate our food more. We’re getting in touch with our inner farmer short of getting a cow.”
To be part of the pilot, the Lothrops completed the mandatory training provided by the Orange County Extension Office and Sundew Gardens in Oviedo. “All the requirements set out by the city made good sense,” Lothrop said. “You can have a lot of crazy, unexpected things happen with your birds and not know how to deal with them. If you don’t know what to look for, you can end up with a flock of sick chickens.”

The next step was to build their coop, where Lothrop admits they went a little overboard. With the help of an architect friend, the couple spent most of June building the palatial hen house, now 6-by-12 feet and over 6 feet high (“My girls are spoiled,” says Lothrop.). Other chicken owners built more humble abodes or bought coops online, as Sheehan did.

Because roosters are prohibited, the owners have to protect the flock. To keep her hens safe from predators like snakes and raccoons, Lothrop buried metal mesh under the coop and keeps it padlocked at night.
Last July, she brought home three one-year-old heritage hens that she purchased from a private farm in Apopka. “I didn’t want to start with chicks and have to wait a year for them to start laying eggs,” Lothrop said. “We wanted to jump right into the stage when we would start to benefit.” And they did; the hens started laying the day after they arrived and have continued to collectively lay about a dozen eggs a week.

The city has set a three-hen cap for all participants in the program. “We wanted to give them the least intrusive amount of chickens, and three chickens laying a dozen eggs a week is more than enough to sustain a single family,” said Jason Burton, who oversees the program as chief planner with the city planning division.

So far, Burton sees the pilot program as a success and anticipates it eventually culminating in a citywide ordinance. “We’re trying to show that these are low-intensity pets, no different from having a dog except that 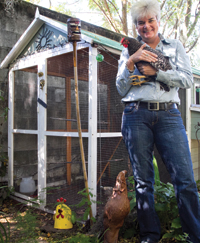 these pets give back food.”

Concern that these city chicks might make neighbors squawk quickly went to the wayside. “My neighbors didn’t even realize I had chickens until they saw me on the news talking about them,” Sheehan says. Likewise, Lothrop’s neighbors are just happy for the occasional handout and the chance to observe the hens take dirt baths or speed through the yard, wings extended, to grab a treat from their adopted parents.

“These are the best treated chickens I have ever seen in my life,” says Dennis Mudge of the extension office. He ran the training program, and he also visits the home of each participant to make sure the chickens are safe and well cared for. He’s somewhat surprised that, locally, Orlando is alone in this endeavor. “As soon as people start putting political pressure on the decision makers it will spread into other counties,” he says. “It’s just a matter of time.”

A group called The Winter Park Backyard Chicken Initiative recently presented commissioners in that city with a petition signed by 501 backyard chicken supporters. “Allowing backyard chickens would aid Winter Park residents in living a greener, healthier lifestyle,” says Rachel Whited-Smith, who has led the initiative. “We got a warm but surprised reaction from the commissioners.” The issue was then sent to the Keep Winter Park Beautiful and Sustainable Advisory Board, which is “watching to see how things go in the city of Orlando” before making a decision, says Tim Maslow, sustainability coordinator for the board.

In the meantime, Orlando’s pilot participants like Lothrop are enjoying the unexpected benefits of raising urban chickens. “We find them hilarious,“ says Lothrop. “They have completely enhanced our quality of life.”

Sheehan is equally as delighted. “I didn’t realize how much personality they would have,” she says of her hens, named Peep, Bleep and Cheep. “They’re characters. They love to be held. My girls are happy little hens enjoying their happy little lives.” Normally, hens only lay eggs for a two-year period, but Sheehan doesn’t see her getting rid of them when the eggs stop. “I have a feeling I will have a hard time parting with them; they really are my pets.”

This article appears in the January 2013 issue of Orlando Magazine.
Categories: Community
Want to read the whole issue? Download and read this issue and others on Magzter.

Story of a... Prosthetist