Brad Kuhn,
The tanned man in tennis togs can’t stand the suspense. For weeks, he and the regulars at the Orlando Tennis Center have been breathing the dust of demolition crews pulverizing the remains of the imploded Amway Arena, recycling that will literally pave the way for the 68-acre Creative Village to be built on the site over the next 15 years.
Togs and his friends have heard that once the machines finish picking the arena carcass, they’ll turn their destructive jaws on the tennis center—a mainstay of the local racquet set since 1931.
“Could I read your mind?” Togs calls to a dapper man in a pressed dress shirt and tie walking on the other side of the fence who has the look of someone who would know. “Is it coming our way?”
“It is,” says Tie Guy, continuing on his way. “But not for awhile.”
Togs doesn’t know it, but he’s just heard the word from the horse’s mouth. It takes a village to build a village—in this case a development team including Banc of America Community Development Corp.; architect Tim Baker of Baker Barrios; the City of Orlando; Ustler Development; and Brooke Myers, president of Emerge Real Estate Ventures, LLC.
The guy in the tie is Craig Ustler, the 43-year-old developer in charge of turning that big hole in the ground and the surrounding real estate into a $1.1 billion supercollider of digital collaboration to make even Richard Florida—the urban theorist credited with coining the term “creative class”—sit up and take notice.
Over the next 15 years, Ustler plans to build up to 1.2 million square feet of office/creative studio space, 500,000 square feet of higher-education space, 25,000 square feet of K-12 education space, 1,500 residential units, 150,000 square feet of retail/commercial space and 225 hotel rooms.
Backers are calling it the largest public transit-oriented development in Central Florida, significantly expanding the presence of institutions of higher learning like the University of Central Florida and Valencia College in downtown Orlando. Creative Village will also be the largest LEED-certified neighborhood development in the state, meaning a heavy emphasis on energy efficiency and environmental-friendly design.
It sounds almost too good to be true—except that when Craig Ustler says something is going to happen, it usually does.
It was Ustler, for instance, who managed to finagle construction financing for the $30 million GAI Building at Summerlin Avenue and South Street during a commercial credit drought that halted all other private projects in the city’s core.
He’s also the guy most often credited, along with real estate broker Phil Rampy, for kick-starting a downtown housing boom in 2001, with the opening of Thornton Park Central, a mixed-use condo development at Summerlin and Central Boulevard.
From an outpost at 801 N. Orange Ave., Ustler and his father, Tom, have been making their mark throughout downtown Orlando. They are currently working on a 230-unit apartment building targeted at healthcare workers as part of Florida Hospital’s Health Village. And they recently announced plans for a 135-room hotel at Colonial Drive and Orange Avenue.
But this story is about more than Ustler. It’s also about the thousands of people who will learn, earn and yearn for authentic lives in a neighborhood that doesn’t exist yet. It’s about a little bookstore that was perfect, except for the books, and a neighborhood down on its luck. And it’s about the idea that people, not buildings, are what create urban renewal. 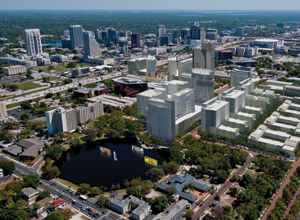 An urban planner’s dreamscape, Creative Village Orlando promises something for everyone.
• Like trains and mass transit? There will be a SunRail stop a block east at LYNX Central Station.
• Education? It’s got every level—from Kindergarten through Ph.D.
• Job creation? There will be 1.2 million square feet of office/creative space and a “capital accelerator” program to help entrepreneurs reach cruising speed.
• Walkability? Think small blocks and lots of bike and pedestrian amenities.
• Housing? There are 1,500 residential units planned, most of them affordable apartments.
• Sustainability? Creative Village will be the largest LEED-Neighborhood Development in Florida—starting with the recycling of the old arena.
• Community? An Ustler hallmark. Look for a food co-op, lots of green space, and hangouts like Thornton Park’s Urban ReThink—shape-shifting spaces that morph with the evolving persona of the neighborhood.
• Diversity? Ustler envisions the Nap Ford school expanded from its current enrollment of 153 students to 600, grades K-12, drawn from the surrounding Parramore community and placed on a path to prosperity through knowledge.
A utopian vision? No doubt. But one based on Ustler’s obsession with how people interact with places, a search that has taken him to most of the great cities of the world. He maintains a home in Manhattan and says he tries to spend 10 days there every two months, walking the streets and observing how people interact with their environment.
He has taken extensive notes on some of his favorite cities in the U. S. and has published brief summaries available at his company’s home page, ustler.net.
—Brad Kuhn
This article appears in the November 2012 issue of Orlando Magazine.
Categories: Features