Harris Rosen's compassion for the stricken people of Haiti is an ongoing mission of hope.

The banners displayed by the families of Chantal, Haiti, hinted at a story of great generosity.

They were greetings from a grateful town to Orlando hotelier and hospitality icon Harris Rosen, who was in Haiti to dedicate a six-classroom school he helped rebuild after Hurricane Matthew.

During his trip over Christmas, Rosen also visited some of the 104 homes he helped repair or rebuild that had fallen prey to the 2017 hurricane as well. His philanthropic arm, Harris Rosen Foundation Inc., works in partnership with South Florida nonprofit Food for the Poor to provide education, potable water and other assistance to the people of Haiti. 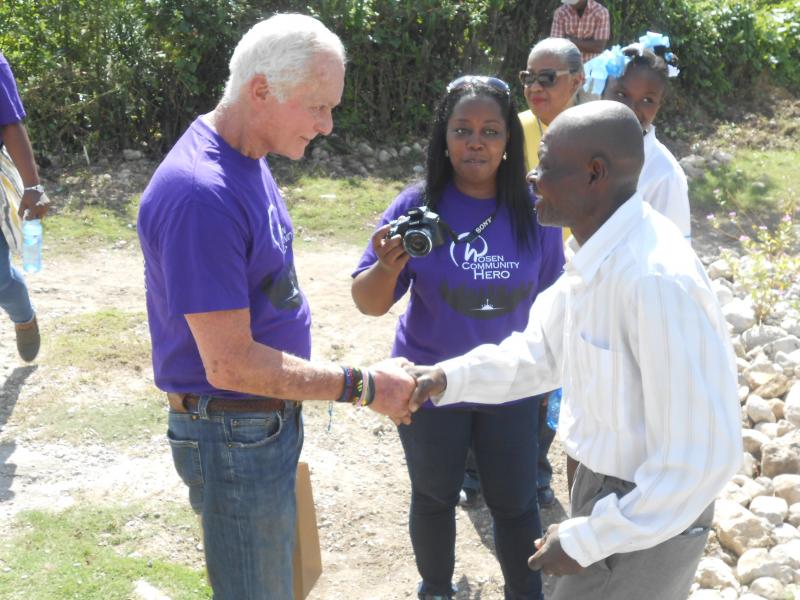 The cause hits close to home for Rosen, because about a third of his company’s employees are from Haiti. “That’s a very significant number of people,’’ says Rosen, who owns nine Orlando-area hotels. “Over the years, we have become quite close to many of our Haitian associates.’’

Rosen has been involved in Haitian relief efforts for about 20 years. “We were in Haiti after the horrible earthquake [of 2010].’’ The Christmastime visit “was a much different trip in that we were able to do something constructive and see the results of our work,” he says.

The son of immigrants and the first in his family to graduate from college, Rosen views education as a stepping stone. In particular, he has helped two traditionally underserved Orlando-area neighborhoods. In Parramore, Rosen provides tuition-free preschool and college scholarships, while his college scholarship program in Tangelo Park has resulted in a nearly 90 percent high school graduation rate, with most students attending college on Rosen-funded scholarships.

“I think we’ve sent about 400 youngsters to college in Tangelo Park,” Rosen says. In Parramore, “we created something that may not exist anywhere else – a preschool through Grade 8 school. We’ve already given about 25 scholarships to Jones High School graduates.”

In the view of the 78-year-old philanthropist, the greater his success, the greater his ability – and responsibility – to help others. “I am able to do it, so I do it. The more able I am to do it, the more inclined I will be to do more – whether it’s Tangelo Park, the Parramore program, the Rosen Jewish Community Center or Haiti. It’s all in an attempt to say thank you to God and pass on the blessings we have received.”