Local arts organizations get creative to bring back live music and theatrical performances in a safe environment for audiences. 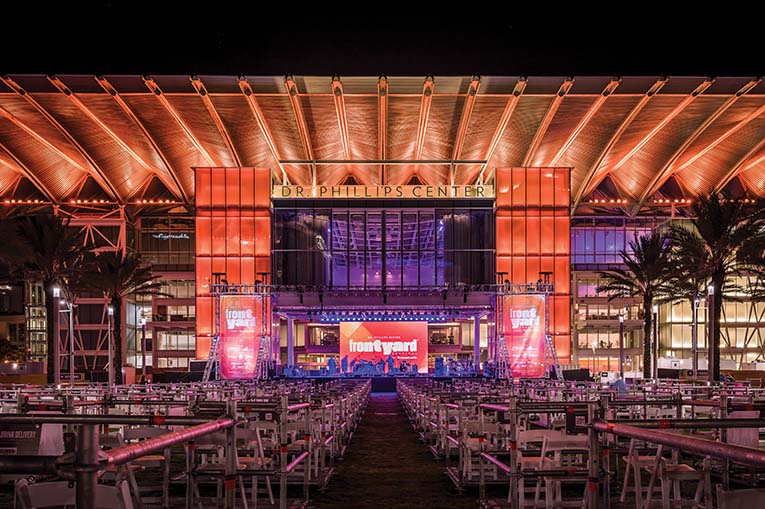 Live entertainment is back, plus films and activities, at the Dr. Phillips Center’s outdoor Frontyard Festival. (ROBERTO GONZALEZ)

It didn’t look to Lindsey Robsen like an ideal setting for an outdoor concert—just a grassy field near the coastline of northeast England, covered with row upon row of metal-tubing rectangles. They reminded her of sheep pens.

But like hundreds of other entertainment-starved Brits in the midst of the COVID-19 epidemic last fall, the 39-year-old legal administrator took a chance at what was being billed as England’s first socially distanced pop-up outdoor venue, enlisting two friends to join her. They wound up as converts after taking in a series of local bands while safely separated from the rest of the crowd in one of those rectangular “viewing pods,” as promoters were billing them.

“It gave us such a buzz and lifted our spirits, enjoying live music again,” she said not too long ago from her home in the North Sea port city of Sunderland. “We were absolutely buzzing about it and told everyone who would listen.”

Turns out plenty of people were doing just that.

In an entertainment industry crippled by the global virus outbreak, word about the success of the concerts traveled fast. When it made it to Orlando, planners at the Dr. Phillips Center for the Performing Arts decided to borrow the concept, converting a conveniently vacant, 3-acre open field in front of the pandemic-idled center into an outdoor theater.

Last month, Dr. Phillips kicked off a six-month “Frontyard Festival” in the new, open-air facility, the only one of its kind in the country, featuring an afternoon series of free concerts and fitness programs in addition to ticketed evening concerts and performances in front of 380 private, 5’ by 7’ elevated boxes, each one suitable for up to five people.

According to Kathy Ramsberger, Dr. Phillips Center’s president and CEO, the series is more important as a morale-builder than a moneymaker. “Our overarching objective is to draw attention to the long, difficult road ahead” toward bringing the center back to full strength, she said, at an opening event.

Barton Myers, the renowned California architect who designed the cantilevered façade of the $612 million center to evoke an inviting Florida front porch—elegant, earthy, and open to all—would surely be pleased.

Here’s how the Frontyard Festival, which began last month, will operate from now through May.

The first thing to remember is that its patrons will be buying boxes, not single seats. Tickets are to be purchased not individually but in clusters, ranging up to five, depending on the show.

For example: If you want to see headliner Keb’ Mo’, who will perform at the festival the evening of Feb. 10, you’ll have to pitch in as a party to purchase the full five seats, to the tune of $35 to $45 each, depending on the location of your pod. (Technically, of course, you could go solo to the concert; you’d just have to buy tickets for yourself and four imaginary friends—all of whom, presumably, share your affection for old-school rhythm and blues.)

Boxes are six feet apart. Masks are mandatory. You’ll go through touchless temperature and bag-checking upon entry. Food and drinks can be ordered via cell phone and delivered to your private box. On-site lavatories are both comfortable and safe, with filtered ventilation systems that bring in air from the outside in a one-way flow.

Though weather is a variable that can’t be controlled, the next few months are generally temperate in Central Florida and lack the afternoon thunderstorms that characterize our warmer weather season. That gives the arts in Central Florida an advantage unavailable to cities further north.

Our local arts community garnered another feather in its cap when the Orlando Philharmonic Orchestra landed flamboyant world-class pianist Yuja Wang to help them celebrate their debut concert in Dr. Phillip’s new, acoustically impeccable Steinmetz Hall this month. That won’t be possible now, given the double whammy of construction delays and the virus. But Wang, who canceled all her other scheduled appearances this season because of COVID-19, will still keep her date with the Phil by performing outdoors at Exploria Stadium on Jan. 9.

Like the Dr. Phillips Center, the Phil has transformed its own considerably more modest outdoor area into a performance space, converting the semicircular façade and parking lot outside The Plaza Live theater into the setting for a series of modestly priced open-air concerts featuring both local bands and its own musicians. The Thursday evening concerts are a prelude and shake-down cruise of sorts, as the Phil hopes to build a permanent outdoor arena at their Bumby Avenue enclave by the summer of 2021.

The orchestra also has performed a series of open-air concerts at the Mead Botanical Garden amphitheater and other fresh-air venues. “We’re not, by nature, a touring-production organization,” says Philharmonic board member RK Kelly. “But when your life’s work is threatened, you are just grateful to be performing.” She’s seen tears from the musicians at the performances, and from audience members as well. “Music heals,” she says. “We need it, especially these days.”

In a similar vein, the Bach Festival Society of Winter Park’s annual monthlong tribute to Johann Sebastian Bach, which ordinarily features a full orchestra and 160-member choir performing in the intimate environs of Knowles Memorial Chapel on the Rollins College campus, will pare down its offerings to chamber-orchestra level and stage many concerts outdoors. The series runs from Feb. 5 to March 1. 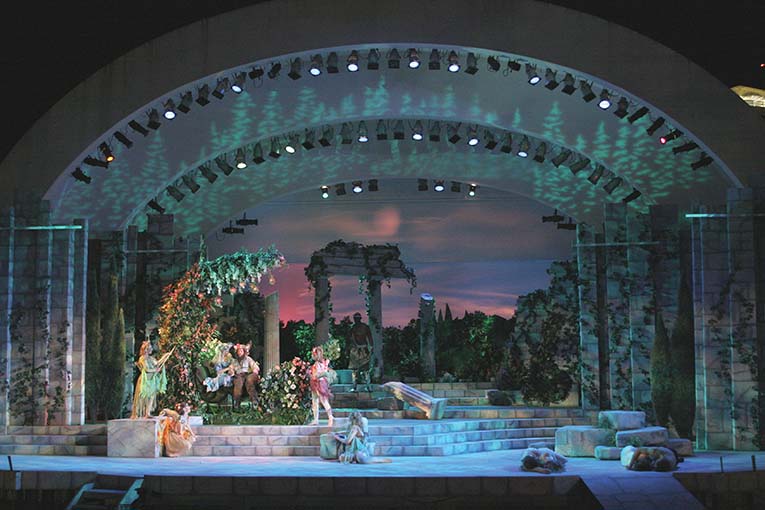 Meanwhile, Orlando Shakes will be busy planning two major spring productions to be staged outdoors at the Walt Disney Amphitheater at Lake Eola, where the then-fledgling company staged its first productions in 1989.

Shakes Artistic Director Jim Helsinger says his emotions ran more toward relief than nostalgia when he was able to phone several longtime Shakes performers and staffers who had been furloughed and invite them to come back to work, thanks to the safer strategy of performing outdoors instead of at the Shakes’ Loch Haven Park venue.

He says the company will likely restrict audience sizes to roughly one-third of the Lake Eola Amphitheater’s 1,157-seat capacity to maintain social distancing, which will be complemented by temperature checks, digital programs, mask-wearing and electrostatic cleaning.

The Shakes will present “A Midsummer Night’s Dream” from March 31 to April 17, followed by “Little Shop of Horrors”—the legendary sci-fi musical about an extraterrestrial people-eating potted plant—in May, both at the outdoor venue.

Under the circumstances, Shakespeare’s tribute to supernatural trickery and star-crossed lovers is an especially good choice: Its setting is the great outdoors.

This article appears in the January 2021 issue of Orlando Magazine.
Categories: Arts and Events
Tags: Dr-Phillips-Center, Frontyard Festival
Want to read the whole issue? Download and read this issue and others on Magzter.