And how regardless, complications remain a fact of life. 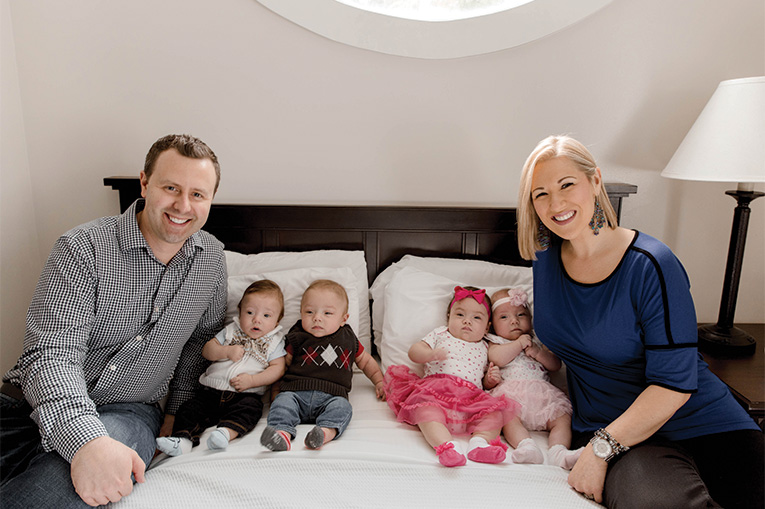 In her sixth week of pregnancy, Michelle Hange faced some daunting, but exciting, news. High-resolution imaging revealed four tiny fetuses taking shape inside her womb, poised on the fragile edges of life.

“My dad’s a fraternal twin, but we never expected this,” she says. “It was definitely a shock.”

The news sent the then-33-year old Hange and her husband, Doug, scrambling to relocate from Michigan to Florida to be closer to family. It also made her impending pregnancy high-risk, requiring careful monitoring every few weeks to ensure the first-time mother and her babies came through the pregnancy fine. They did.

On June 8, 2018, the quadruplets arrived nearly two months prematurely in an emergency Cesarean at Winnie Palmer Hospital for Women & Babies in Orlando. First to arrive: Jackson at 2 pounds, 12 ounces; then Elle at 2 pounds, 13 ounces; followed by Kate at 2 pounds, 10 ounces; and lastly, Oliver, the largest of the foursome, at 2 pounds, 15 ounces.

“We have an instant family now and, no, we’re not planning any more,” says Michelle with a quiet laugh. “They’re all good little eaters. And they’re all doing well.” 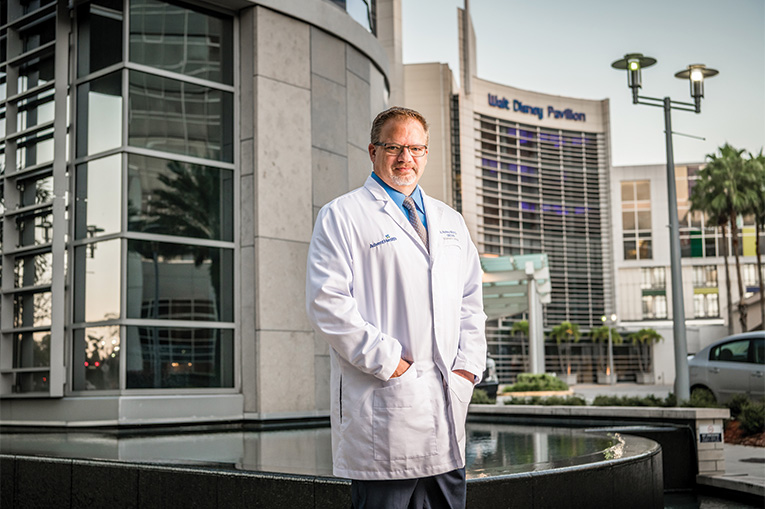 Without proper medical care, however, Hange’s quadruplets faced an increased risk of being stillborn, or developmental complications arising from their too-early birth. Her own risks included gestational diabetes, high blood pressure, severe blood loss and the C-section itself.

Fortunately —as with Michelle’s pregnancy —doctors today have access to enhanced diagnostic tools, such as high-resolution ultrasound and even magnetic resonance imaging, that allow them to see inside the womb and prepare for any complications that might arise. They also can rely on data-driven “best practices” in maternal care, whether that be avoiding unneeded Cesareans; the best timing for treating hypertension or high blood pressure; or even convincing obese women to lose weight before giving birth to reduce cardiovascular risks to themselves and their newborns.

Such measures have become more important than ever, experts say, as doctors battle a troubling nationwide rise in pregnancy-related complications and deaths over the past 25 years, according to a recent report from the Centers for Disease Control and Prevention in Atlanta. (see accompanying story).

For the Melbourne couple, knowing early they were having quads not only assured them of ongoing medical care throughout the pregnancy, but also gave them time to adjust to the idea of a house full of new babies. When her water broke at 29 weeks and two days, Michelle says, the hospital triaged her immediately to an operating room, where a team of labor-and-delivery specialists awaited to handle any unanticipated complications.

“It was interesting how quickly they assembled a team,” Michelle says of the experience. “I was impressed.”

The federal CDC estimates that the number of complex pregnancies behind this trend has doubled between 1990 and 2014, due in part to older maternal ages; soaring pre-pregnancy obesity, especially in the South; and vast racial and economic disparities in access to health care, before, during and up to a year after pregnancy. These factors, in turn, contribute to higher rates of Cesarean deliveries, which carry their own set of complications, doctors say, from life-threatening blood loss to high blood pressure and placental abnormalities that block the birth canal. 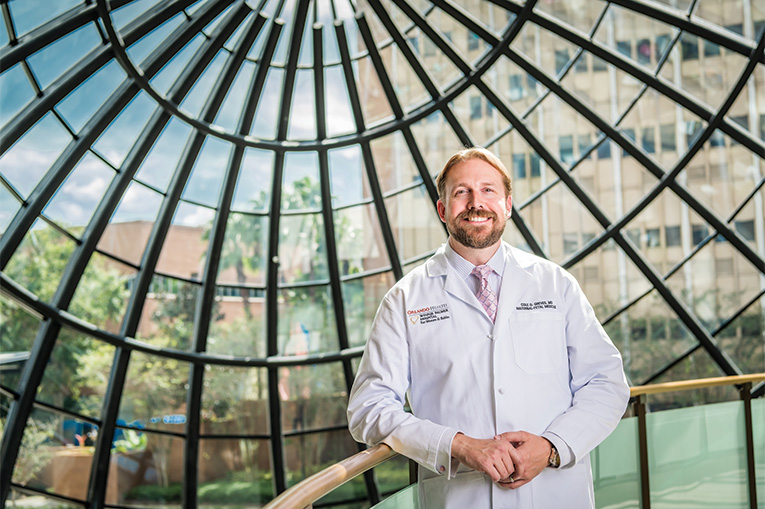 Dr. Cole Douglas Greves of Winnie Palmer Hospital says recognizing women who are at highest risk for blood loss has been an important advancement in care. (ROBERTO GONZALEZ)

“A lot of women think C-sections are not a big deal, but the truth is there’s a lot of scar tissue and complications afterward,” says Dr. Ashley Hill, medical director of obstetrics and gynecology at AdventHealth Medical Group in Orlando. “Some women may feel they’re more convenient, but these are major abdominal surgeries.”

In many cases, such as Michelle’s, C-sections are medically unavoidable to secure a safe delivery for a mother and her child, Hill and others stress. But how many of these procedures occur because of maternal or provider preference rather than medical necessity, especially in first-time mothers, they say, is not clear.

State data for this group should soon be available to the public, however, providing a clearer picture, says Dr. William Sappenfield, professor and director at the Chiles Center in the University of South Florida’s College of Public Health and the director of Florida’s Perinatal Quality Collaborative in Tampa. That’s important, he says, because physicians now know from best practices, or ‘‘evidence-based” medicine, that first-time mothers expecting a single child face the lowest risk for complications during natural childbirth, if the baby is not in a breech or transverse position.

So, the collaborative is promoting vaginal deliveries in these women across Florida, whenever possible, to bring the overall C-section rate of 31 percent in 2018 closer to the national Healthy People 2020 goal of 23.9 percent of births. Although doctors expect it will take time to transform clinical practice, lowering medically unnecessary C-sections in the state is considered critical to ongoing efforts to improve maternal care.

Some collaborative efforts already have made a difference, according to Sappenfield. For example, hypertension or high blood pressure, which mostly occurs during labor, was once the second leading cause of maternal death in pregnancy, he says. But, based on cumulative evidence, doctors have cut the number of women who die from hypertensive disorders in half. “We now recognize mothers who become hypertensive need to be treated quickly, within an hour,” he says. “It used to be there were too many hands in the operating room, but now doctors begin treatment immediately.”

More problematic has been reducing the risks posed by sudden hemorrhaging in pregnant women. “In many cases, hemorrhaging is not something we can easily prevent,” says Dr. Cole Douglas Greves, a clinical perinatologist and medical director of Winnie Palmer Hospital’s antepartum and women’s intensive care unit.

But doctors are doing much better today, Greves says, both at assessing the amount of blood loss and recognizing which women are at highest risk for these events. “Most hospitals have mass transfusion protocols all ready to go into the OR, or to add anesthesia, as needed,” he says, along with simulation training for handling acute emergencies.

And about a year ago, Winnie Palmer added a handful of small devices, known as the Triton, to boost the ability to track obstetric hemorrhaging. The Triton system takes the “guessing game” out of quantifying blood loss during labor and delivery, says Lorraine Parker, a registered nurse and the patient care administrator for obstetrical and mother-baby services at the hospital.

“Prior to having this tool, we relied on visual cues,” such as eyeing blood loss on surgical sponges, she says. “This [Triton] gives us accurate numbers in delivery,” enabling providers to determine whether it’s necessary to intervene. Although the device is expensive, the cost of leasing it from the manufacturer, Gauss Surgical, is more than offset by not overtreating patients with unneeded blood products, Parker says.

Yet another innovative way of stemming dangerous blood loss is the Bakri postpartum balloon, suggests Hill of AdventHealth. It’s a relatively new device, commercialized in 2006 by Cook Medical, in which doctors place the balloon inside the vagina and inflate it if a woman suddenly stops contracting after delivery. “Every hospital has this and it markedly decreases blood loss—saving lives,” Hill says. The balloon can be used in either a C-section or during natural childbirth and if hemorrhaging occurs, he says, reduces the need for hysterectomies and blood transfusions.

As an expectant mother of twins, Sondra Rae Valentino says, she experienced few such complications, despite being high-risk. Routine ultrasound alerted her doctors early to a multiple birth and the then-29-year-old Orlando resident also benefited from a rather low-tech swab test that measures cervical length and the fetal protein, fibronectin, which is found in the vaginal fluid.

These tests tell doctors “who is more or less at risk for preterm labor,” the leading cause of fetal mortality, Dr. Hill says, “and where to focus our efforts for a safe delivery.”

In Sondra Rae’s case, the tests revealed a short cervix, threatening to bring her developing twins into the world too early to survive. So the local radio personality took iron supplements for an iron deficiency and wore an old-fashioned pessary device, similar to the outer ring of a diaphragm, to keep the cervix from opening up too soon. After months of wearing the device, she gave birth to Leonardo and Siena by Cesarean on September 20 last year at AdventHealth for Women. Doctors delivered the pair roughly six weeks shy of a full-term birth.

Although Leonardo’s heart beat a little too slowly at first, his mother says, he and his sister went home from the hospital’s neonatal intensive care unit after only a few weeks. “They’re doing really well now,” Sondra Rae says. “And they’re super healthy.” 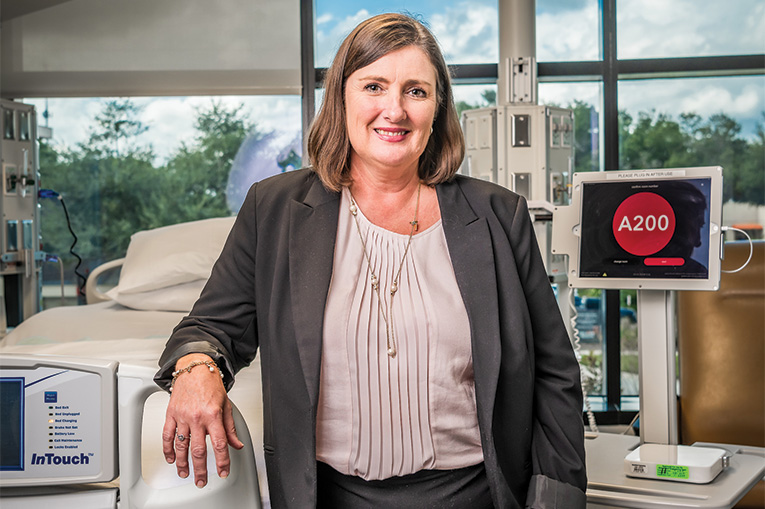 Sondra Rae’s successful pregnancy, as well as Michelle’s, clearly illustrate how access to good health care can make all the difference in pregnancy outcome. Not only did both women undergo careful monitoring during their pregnancies, both gave birth in what state officials term “risk appropriate hospitals”—high-volume birthing facilities able to handle any medical complications that might arise.

As part of their medical expertise, in fact, many of these hospitals even offer some women the option of undergoing a vaginal birth after Cesarean—a significant departure from the past. Even the American College of Obstetrics and Gynecology now finds the practice acceptable in carefully selected women.

At Winnie Palmer Hospital, Dr. Greves says, doctors may encourage a woman to have natural childbirth after as many as two previous C-sections. Much depends on how the uterus was previously closed, he says. “If the integrity of the uterus is robust and we can monitor the mother closely, then vaginal birth is an option.”

Dr. Lori Boardman, chief medical officer at Advent- Health for Women, agrees. In general, she says, it’s best to avoid initiating labor after a woman has had two C-sections, given the high potential for uterine rupture.

But, with the addition of obstetric hospitalists—specialists in labor and delivery available 24/7—she says, the hospital’s vaginal birth rate after C-section increased from roughly 3 percent in 2015 to over 12 percent last year.

That, in turn, means lower overall C-section rates at the hospital, she says, not only a desirable goal, but one now viewed as safer for most pregnant women.

This article appears in the December 2019 issue of Orlando Magazine.
Tags: doctors, health, medical, pregnancy, pregnant, prego
Want to read the whole issue? Download and read this issue and others on Magzter.