Residents should plan to be home starting Thursday, March 24 at 11 p.m.

In a press conference this evening, Orange County Mayor Jerry Demings made it clear: if your travel isn’t essential, you need to stay home. 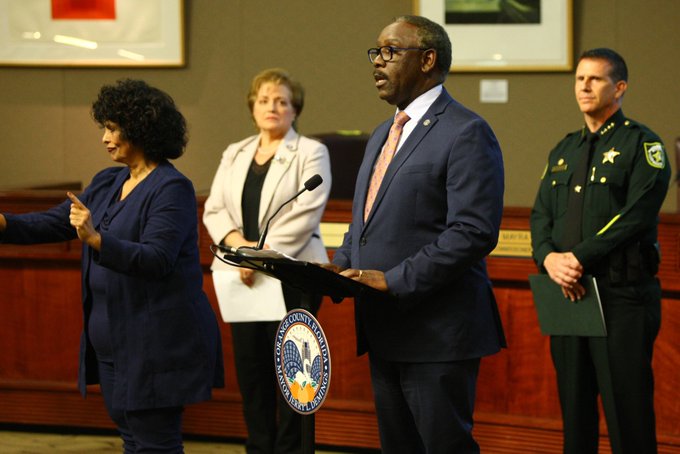 Effective Thursday, March 24 at 11 p.m., residents of Orange County are ordered to stay in. The order continues through April 9, and will close all non-essential businesses. Essential businesses are outlined in the executive order.

“Orange County has reported now at least 50 cases of the coronavirus,” Mayor Demings said, as he took the podium. “Just one week ago, we had only one case. It is an understatement to say the least that the virus is spreading rapidly within our community and we want to take every measure possible to slow the spread and keep our residents safe and healthy.” Mayor Demings went on to say that several of those infected were first responders, such as firefighters, police officers, health care workers and TSA agents.

Under the stay at home order, Orange County Sheriff John Mina stated that law enforcement officers will be issuing warnings. As a result, those found in violation of the order could receive $50 citations, and could spend up to 60 days in jail—the same steps that the Sheriff’s Office is taking to enforce the 11 p.m.-5 a.m. curfew.

On the bright side, Sheriff Mina also stated that 911 calls were down about 28%—a sign that people are heeding the advice to stay in.

What You Can Do

What does the order mean? According to a follow up tweet from Orlando mayor Buddy Dyer, residents are permitted to do the following:

What You Can’t Do

Residents are not permitted to do the following:

Mayor Demings acknowledged that the action was not easy to take. “We believe that this is the most effective way to deal with the Coronavirus threat. Our goal is to stop the spread and to get life back to normal as quickly as possible.”

The mayor said that he also expected a similar announcement from Osceola County officials later this evening or tomorrow.

This is a developing story, and we will continue to update it as needed.