Q: Why are the antlers missing from the elk in front of the Orlando Elks Lodge?

A: Answer Man thinks it’s sad for anything that even remotely resembles a reindeer to be missing its pride and joy this time of year—especially when it’s because of idiot thieves.
The antlers that adorn the elk statue have been stolen at least five times since Elks Lodge 1079 moved into its current headquarters at Primrose Drive and Central Boulevard in 1972, says lodge president Mike McClay. The most recent theft was about two months ago, and lodge officials are pretty fed up: They have no immediate plans to buy new antlers until they can figure out a better way to secure them. Instead, the Elks, who have been in Orlando since 1907, are channeling their fund-raising efforts into projects ranging from scholarships to free dictionaries for students to breast cancer research.
Trivia break: The local Elks Lodge started the Tangerine Bowl, later to become the Citrus Bowl, in 1946 to raise money for a children’s hospital. The organization ran it until 1972, when the NCAA determined a broader group of sponsors was needed. 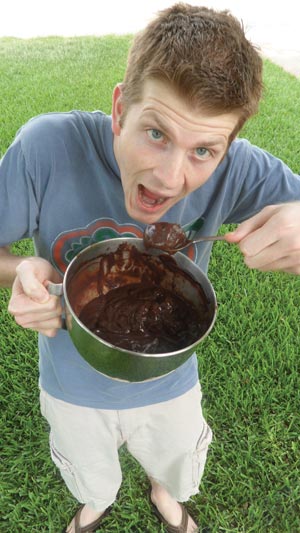 Q: What are some of the weirder Guinness World Records with ties to Central Florida?

A: Fascinating feats include owning the largest collection of Mickey Mouse memorabilia (Janet Esteves of Celebration, with more than 4,100 items and growing); and longest distance cycling backward (Central Floridian Darl Bonnema, who eight years ago rode the handlebars while cycling in reverse for 112 miles in 24 hours at Disney’s Wide World of Sports). However, Answer Man’s personal favorite is most pudding eaten in three minutes—2 pounds 15 ounces—achieved by Donald Cunningham of Eustis in 2010.
So just how does one end up staring into a huge bowl laden with the equivalent of 10 boxes of JELL-O sugar-free, cook-and-serve chocolate pudding?
“I created a bucket list a few years ago and one of the things I listed was that I wanted to set a world record,’’ recalls Cunningham, now 26 and working in marketing in Buenos Aires. “One night I was lying in bed thinking about how I was going to pull this off and decided I wanted the record to be related to something I really enjoyed. The first thing that popped into my head was pudding.’’
No such record existed, so Cunningham petitioned Guinness, which approved the attempt (after laying out rules that included two timekeepers and two upstanding members of the community to act as witnesses). The group gathered at Elizabeth Circle Park in Eustis on May 10, 2010.
It wasn’t too bad,’’ Cunningham says of the memorable three minutes.  “As silly as it sounds, I trained for a few weeks ahead of time. My little sister was my trainer. I would practice with JELL-O gelatin and would drink as much water as possible to expand my stomach.’’
Being a record-holder can have life-changing benefits, Cunningham has discovered.
“Actually I think it is one of the things that attracted my wife to me,’’ he says. “In our very first conversation…as soon as I told her that I set the record for the most pudding eaten in three minutes, she burst into laughter for probably a minute straight. She claims she was hooked from that moment on.’’

This article appears in the December 2012 issue of Orlando Magazine.
Categories: Community