On the Waterfront: Getaway to Stock Island

Artists, chefs and craftspeople are transforming Stock Island in the spirit of the old Key West.

Anyone who’s driven the Overseas Highway to Key West has passed through Stock Island. Golfers know it for the Key West Golf Club, and insiders seek out Hogfish Bar & Grill, a fish shack with an elevated menu and a loyal following. But otherwise it’s where Conchs (Key West residents) have kept their livestock, and the marinas have provided anchorage for working shrimp boats.

But all that is starting to change. The island, adjacent to Key West, has been quietly drawing an eclectic mix of entrepreneurs for its affordable space. With hotel occupancy in Key West exceeding 80 percent, it’s no surprise that developers have followed suit. Last year, two upscale waterfront hotels opened their doors to Stock Island’s first overnight guests. 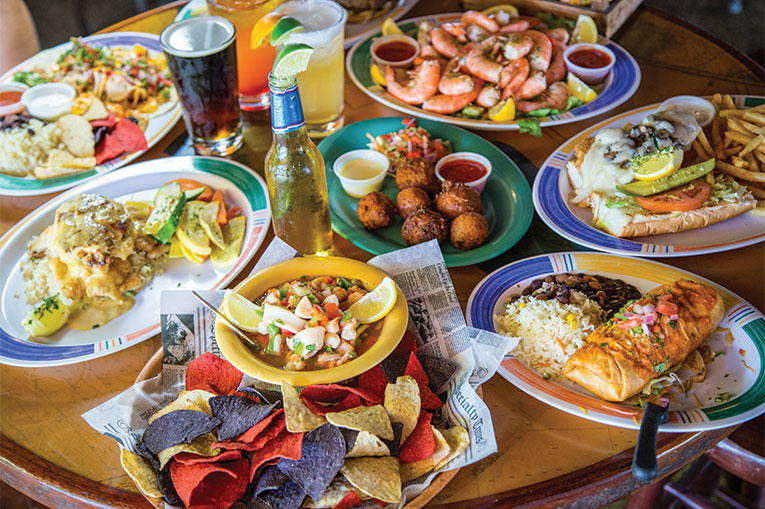 “People come to the keys for the water,” says Pritam Singh, a longtime Keys developer. “Stock Island has more accessible waterfront for boating than all the seven islands that make up [Greater] Key West put together.”

Singh’s 175-room Oceans Edge Key West Resort Hotel & Marina opened in January 2017. Built in the traditional Key West cottage style and facing its own marina, every room has a waterfront view, and guests can find their vibe at one of six different pools. A few months later, the 100-room, industrial-chic Perry Hotel Key West opened at the completely revitalized Stock Island Marina Village. Rooms and suites at both properties are spacious by any standards.

There are also enhanced activities for guests. From Stock Island Marina, Namaste Eco-Excursions takes small groups on kayaking and snorkeling outings through the mangroves and on the reef; and the When and If, a 1939 restored wooden yacht, is available for  relaxing sunset sails.

At Oceans Edge, Serenity Eco Therapy takes guests stand-up paddling to a shallow area within a protected mangrove forest. Here, the boards are anchored for a guided yoga session that ends with a 20-minute meditation. It’s so relaxing, you might just become one with the ocean by rolling off your board.

Dine at Hogfish Bar & Grill on the marina in Safe Harbour, then walk off your fish tacos with a stroll down the dock. Potted plants, bicycles and charcoal grills indicate the presence of full-timers whose lives seem to be anchored in either the warehouse-style building along one side of the walkway or the moored boats on the other. 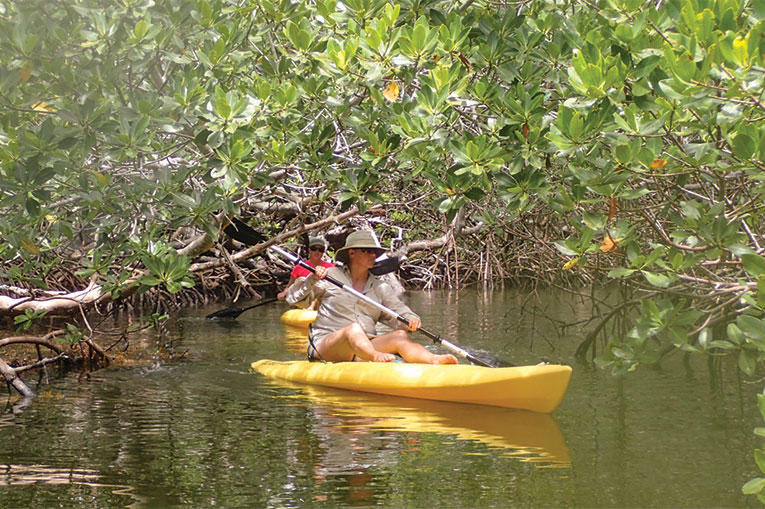 On Friday nights, open doors reveal a rustic bar and two-level event space—the Lost Kitchen Supper Club—where you’ll need to join the email list to learn about themed pop-up suppers organized by Key West chefs. One such supper featured a raw bar, oyster-bake and marinated mussels. Everyone is welcome, though, on “Casual Fridays” when Chef Martin Liz tends a cash bar and sets out plates of chef-prepared bar snacks. The pace here is slow enough for Liz to whack the tops off green coconuts with a machete to mix the milk with gin, sweetened condensed milk and key lime for his potent “skyjuice.”

Liz is a fourth-generation Conch who grew up spending time on his dad’s farm on Stock Island. “We had goats and rabbits, and we raised much of what we ate,” says Liz, who opened his “secret” supper club in 2015 with Bobby Mongelli, owner of Hogfish and founding member of the “I Love Stock Island” community movement.

“Stock Island is becoming what Key West used to be,” says Mongelli, a resident for nearly 40 years. At the second annual
“I Love Stock Island” festival in December, hundreds of guests enjoyed events from a shrimp boil to a brunch bike ride and a hop-on, hop-off trolley tour to visit galleries, shops, restaurants and more.

Even with the current development, Stock Island is largely still a place of boatyards and warehouses. Explore these gritty streets by bike, and you’ll likely spot a fenced-off lot with a large sign reading: COAST.  “Mellow folk welcome” is painted on a plank nailed over the entrance. Venture inside to watch artists at work in their studios or check out a hand-planed skateboard or surfboard. COAST is a place where the line is blurred between work and play, as intended by founder Billy Kearins. “Here, we have more freedom. I had this space and kept trying things I liked,” says Kearins, including live concerts and other events. “I’m trying to do something new, but in the spirit of the old.”

A vacation on Stock Island is a different Key West experience. It’s a slower pace—you can hear the seabirds, chat with a local over a cocktail and join charter excursions that focus on quality over quantity. Go soon and you’ll also be able to say, “I knew it when …”.

Thanks to two new upscale hotels, 275 rooms are available on Stock Island, where before there were none. ilovestockisland.com

NEW HOTELS
The Perry (perrykeywest.com) marries art and industry in a boho-chic assemblage of casual, personalized hospitality. Oceans Edge (oceansedgekeywest.com) is crisp and elegant and built in traditional Key West style. Both hotels are on private marinas, although Oceans Edge faces south to the open water. Both are pet-friendly.

OLD SCHOOL EATS
Island standards include Hogfish Bar & Grill with its fresh seafood menu; Roostica (another Mongelli spot) for wood-fired pizza; Chico’s Cantina, where enchiladas verde are best enjoyed on the covered garden patio; and two Cuban faves: El Mocho and DeLuna’s Café, both “so real, it doesn’t get any better,” says a local.

NEWCOMER BITES
Matt’s Stock Island Kitchen & Bar at The Perry turns out coastal comfort food that is as artfully composed as the hotel itself. Chef Ryan’s Instagrammable seafood tower is served on ice in an open tackle box and filled with tasty components to build perfect bites. Covered outdoor seating overlooks Stock Island Marina and the pool.

MORE TO SEE & DO
In addition to all the charter excursions, Stock Island is home to the Key West Golf Club, which was not damaged from Hurricane Irma, and the Key West Tropical Forest & Botanical Garden that reflects the Caribbean’s unique ecosystem of flora and fauna. The beach at Fort Zachary Taylor State Park on Key West is only 6 miles away.