A welcome addition to Orlando’s Hourglass District, this combination taproom-brewery provides a casual spot where friends can kick back and relax.

One part taproom, another part brewery, Ocean Sun Brewing checks off both boxes for a cool neighborhood hangout. Found in the Winn Dixie plaza on Curry Ford Road in the newly christened Hourglass District, the brewery opened in March of 2016 to the delight of local craft beer enthusiasts. 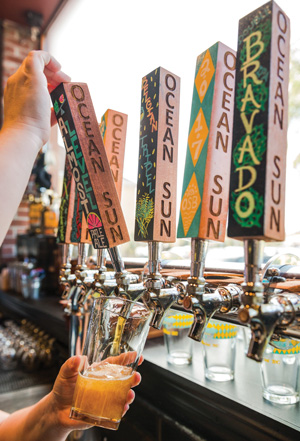 With 12 house-brewed beers on tap, Ocean Sun has a cold one for everyone. Lagers, pilsners, red ales and porters rotate, while four core beers remain constant: the Bumby Blonde, the Blue Bags IPA, the Conch Cruiser Hefeweizen and the Buchi. The last of the four, an espresso milk stout, is inspired by the Cuban espresso of Key West, where owner Bob DeWeese grew up.

“Most of the best coffee on the island comes out of a laundromat. Go to M&M Laundry near White Street, order a Buchi, and you’re good for the day,” says DeWeese. “That’s why our stout is specifically espresso milk stout. The real Buchi is 2 ounces of espresso, and what seems like half a cup of sugar. It’s sweet and strong. So we wanted it to be like drinking cold coffee.”

Its fellow staple, and their most popular draft, the Bumby Blonde, is a Belgian-style ale with a slight sweetness and fruitiness, plus clove and banana flavors. The Blue Bags IPA is an accessible IPA: It’s not overly bitter, with plenty of hop flavor and aroma. And the Conch Cruiser Hefeweizen is a refreshing, light-bodied German-style ale, slightly fruity and citrusy. Full pours average $6, and all selections are available in flight form, with small pour prices from $2.25.

Beer isn’t the only thing offered. Giant Jenga, traditional darts, and a wide array of board games await willing players who are welcome to bring well-behaved canine companions. The dog-friendly bar even has its own furry mascot, Bailey, a sweet yellow lab that strolls around sniffing and hoping for some head rubs.

What really makes Ocean Sun different is that it’s kid-friendly, and it provides table service. There’s a couch-filled corner full of kids’ games, and parents and patrons alike benefit from not having to get up to order. Attentive servers take orders, top off waters and drop off generous servings of well-salted popcorn. 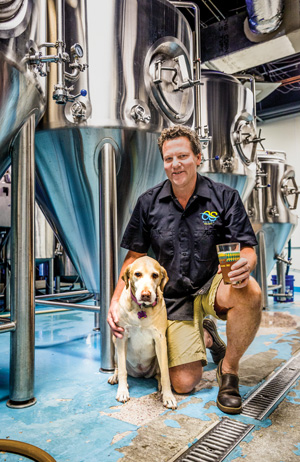 The popcorn is free and unlimited—within reason. Should patrons desire something heartier, the brewery keeps the menu of the Mexican restaurant next door on hand. Tacos from La Fiesta can be added directly to any beer tab.

Last, live music happens most Friday or Saturday nights, and regularly on Sunday afternoons. If an acoustic guitar player isn’t in the room, an eclectic playlist of classic, emo, indie and folk/rock cycles throughout the day.

Just take note: It’s not a sports bar—and that’s ok. “It’s a relaxed, social atmosphere,” says
DeWeese. “We have TVs, but no one watches them because it’s about coming in, drinking great beer, having good conversation, and playing games with friends.”

This article appears in the November 2017 issue of Orlando Magazine.
Categories: Food & Drink
Tags: brewery, brewing, district, hourglass, ocean, Orlando, sun
Want to read the whole issue? Download and read this issue and others on Magzter.