Now Showing at the Enzian

In taking over the family-owned movie theater, Elizabeth Tiedtke recasts its image to appeal to a wider audience.

Even as movie audiences are shrinking, the 26-year-old single-screen Enzian Theater is holding its own, thanks in part to the ideas of its new 25-year-old executive director.
Elizabeth Tiedtke is the latest member of her philanthropic family to take the reins of the dine-in movie house. She replaces her mother, Sigrid, who has alternated in that executive director position with Philip, Elizabeth’s father, pretty much since Enzian opened on family property at the corner of U.S. 17-92 and Magnolia Road in Maitland. Elizabeth grew up at Enzian—learning to change the letters on the marquee as soon as she was tall enough. She knows why people love the theater, and why not everybody shares that love.
“As a teenager, I’d tell people I sold tickets at the Enzian, and they’d go, ‘Oh, it shows nothing but foreign films. I don’t like
reading subtitles.’”
Still, Enzian saw a 5 percent rise in attendance last year while national chains suffered an 8 percent decline in ticket sales. Elizabeth credits efforts to diversify—Saturday opera telecasts and “cult movie” nights—for thxe boost. Enzian added the popular Eden Bar, an outdoor attachment to the theater, a couple of years back. And Elizabeth has pushed for free outdoor showings of “classic” films (she considers Spaceballs a classic) on the lawn, taking some of the starch out of the label “art house” with the “The Wednesday Night Pitcher Show.”
“We give out Jell-O shots as prizes for patrons who can answer trivia questions about the film,” she says. “And I absolutely LOVE Spaceballs.”
Elizabeth suspects Enzian’s snooty image has kept people away from the annual Florida Film Festival that the theater hosts. Last year’s festival saw a 17 percent drop in attendance.
“People are afraid that it is this daunting thing, nothing but film snobs, all wearing black,” she says. To combat that image, she plans to make the 21st annual festival, which runs April 13-22, a broader food, film and wine event.
Elizabeth studied theater at NYU but returned home to get her degree—in economics—at Rollins College. She followed that with a year at New York’s French Culinary Institute, which she put to use in Enzian’s kitchen.
“Lizzie has a culinary and business operations background that I never had,” say Sigrid. “She’s already doing a better job running [Enzian] than I ever did.” 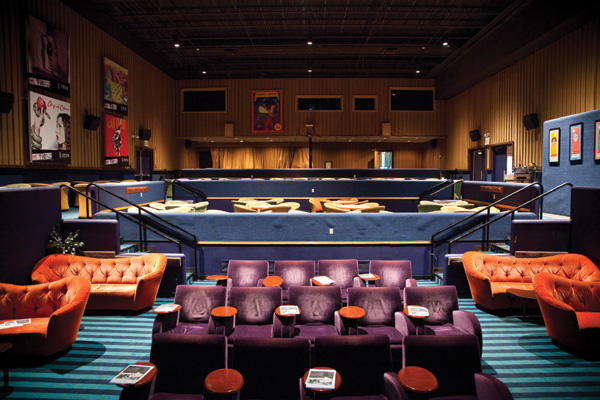 This article appears in the April 2012 issue of Orlando Magazine.
Categories: Community
Tags: Elizabeth Tiedtke recasts its image to appeal to a wider audience., In taking over the family-owned movie theater