Now, It's Our Pulse

Over the past few days, the nightclub site became an emotional, uplifting gathering place—and a symbol of something more.

“It’s not just our own little corner of Kaley and Orange anymore,” said Barbara Poma, when she announced plans last month to create a memorial on the site of her Pulse nightclub. “Now it belongs to the world.”

That transfer of ownership became obvious over the past few days.

It may have been on the minds of many who gathered Monday night at the Walt Disney Amphitheater at Lake Eola Park in a rain-spattered but soulful event that featured remarks by both Poma and city leaders, along with the singing of the Orlando Gay Chorus, Grammy award-winning pop singer Olga Tañón, and Central Florida native Sisaundra Lewis. But it was at that “little corner” Poma spoke of where you could see it mostly clearly.

Poma has established the onePULSE Foundation, tasked with creating a memorial and museum on the site—a “sacred place,” in her words, where people, particularly those who are a part of or close to the Latino and LGBT communities, can heal, can learn, can honor those who were lost. They were lofty goals when she announced them. For many who visited the site Sunday and Monday—some who were family members, lovers or friends of the dead, others who simply came to show support—they felt more like works already under way.

The key event at Pulse, open only to survivors of the massacre and relatives of the dead, was a memorial service held in a cordoned-off courtyard just outside the nightclub on Monday, early in the morning—the time when the attack happened.

But there was a sense of respectful participation that night among the people who gathered on the street just outside the courtyard. Some strained to hear the speakers at the service—even though her words weren't clear from a distance, it was clear that Orange County Mayor Teresa Jacobs was struggling with her emotions. Others, clearly out of earshot, stood stock still  facing the courtyard as the clock approached 2:02 a.m.—protective, bearing witness, shoulder-to-shoulder with the omnipresent angels with wings of bedsheets and PVC pipes who lined the street.

During the daytime on Sunday and Monday, the atmosphere differed. There’s an aura at the site, a sense of embrace in the sheer accumulation of messages, signatures, and slogans that visitors have used to embellish every available surface around the charcoal-colored, boarded-up club—from the fence that surrounds it to the branches of trees to the landscaping stones along the sidewalk. The effect was magnified, over the weekend, by a temporary, 40-by-12-foot mural erected on a lot behind the site Saturday. The mural, the result of a yearlong project by Pennsylvania artists Michael Pilato and Yuriy Karabash, is a model of a planned larger, permanent 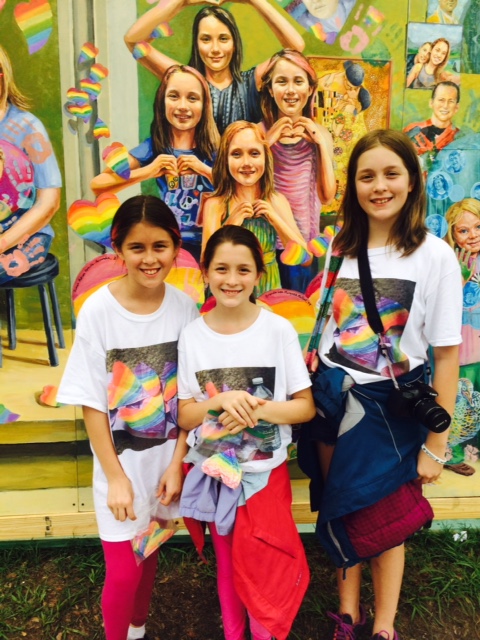 mural, and includes images of all of the 49 who died, along with portraits of key heroes and healers who have become familiar to the gay and Latino community since the attack.

Now and then, one of those heroes—or in the case of the Kimball girls, three of them—turned up in the flesh. That would be (shown in order at left) Delanie, 11, Emmalie, 10,  and Casadie, 14, who so far, since the tragedy, have created and distributed 20,000 small, rainbow-covered hearts with “love always wins” and Orlando strong” on the back—a strategy they landed upon after discovering the day after the attack, partly to their disappointment and partly with a sense of relief, that they were too young to donate blood.

As a crowd gathered around the mural, its two artists, paint brushes in hand, assisted family members who wanted to leave a palm print next to the images of their loved ones. Sandy Wade, mother of Edward Sotomayor, a 34-year-old Orlando travel agent who died in the attack, decided the portrait of her son was positioned too high on the mural for her to chance a trip up the ladder to leave a palm print.

But a smile came to her face just the same. “It’s the best picture of him I’ve ever seen,” she said. “He loved everybody. He was Mr. Top Hat—not to us, that was how he was known in his business, on the cruises. To us he was just Eddie.”

She looked around at the crowd. “I’m sad. It hurts. But this is so wonderful. They want to give out scholarships. This is all so……” She shook her head, searching for words, then found the one she wanted. “It’s just love, I guess.”

That assessment would have pleased Barbara Poma, who spent part of her weekend standing at curbside in front of the Pulse site, holding up a sign, like those hawkers who are trying to get you to buy pizza or cell phone plans. Except her sign said:

“We will not let hate win.”