The picturesque outdoor bar is a main attraction for both film buffs and craft cocktail lovers. 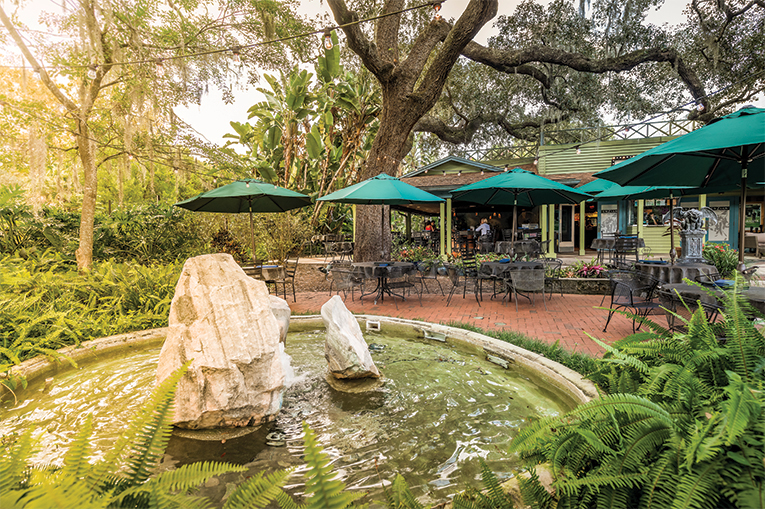 The appropriately named Eden Bar, located at Maitland’s Enzian theater, is a place for patrons to enjoy specialty cocktails, local beers and an impressive bar menu. The open-air bar is nestled among the canopy of 400-year-old live oak trees in a lush garden setting. And like any good drinking establishment, there are stories behind the details.

The original design of the bar’s backdrop is from an illustration by Oscar-nominated animator Bill Plympton, who was inspired by Lake Maitland and Dog Island. Fun fact: Plympton is known for hiding something slightly R-rated in his work, and the Eden Bar’s mural is no exception. The addition is so subtle that most people don’t even know it’s there. To transfer Plympton’s original work into a larger format for the bar, the Enzian employed the skills of two local visual arts masters, Maureen and Spanky Hudas. 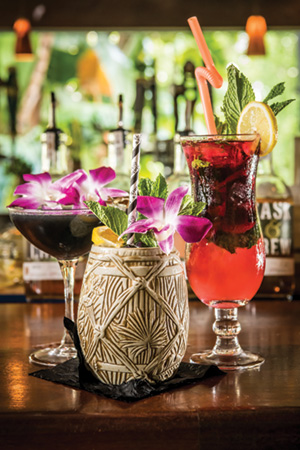 Tina Tiedtke, who—with her family—founded the Enzian in 1985, designed the garden’s fountain as a centerpiece for the sitting area. The structure is in the likeness of a deep blue alpine flower called the Enzian. As an added touch, sculptor Preston Willingham adorned the structure with carved stones.

It’s not just art and film that attracts the eclectic group of patrons to the Enzian’s Eden Bar. Since the bar’s debut during the 2008 Florida Film Festival, its drink menu has featured original cocktails inspired by iconic films and celebrities—some of whom have made the occasional appearance. The bartenders are experts at mixing up creations with house-made ingredients that include everything from lavender-infused Absolut to selections of syrups such as Vanilla Burnt Sugar, Honey and Passion Fruit.

The most recent addition to the Eden Bar’s drink ensemble is the Polynesian Tiki cocktail menu. Festive libations include touches of honey and absinthe in Robert’s Rum Barrel and the jalapeno-infused Freaky Tiki. For a shareable concoction, try The Knowledge of Good and Evil, an everchanging boozy bowl of punch that can satisfy up to three guests.

The chefs ensure that the food menu items are made with quality ingredients, working with local vendors such as Olde Hearth Bread Company. A variety of dishes include Truffle Parmesan Fries, Olde Hearth Pretzel Sticks, flatbreads, soups, sandwiches, paninis and desserts.

But whether patrons come for a pre-show drink or to take advantage of the alfresco ambiance, they appreciate the Eden Bar as a neighborhood hideaway with an Old Florida feel. It’s an experience that always earns rave reviews.

The Eden Bar is open seven days a week from 11 a.m. to 11 p.m. with a happy hour from 6-11 p.m. or until last call. Reservations are available in the garden and fountain areas.

This article appears in the December 2019 issue of Orlando Magazine.
Tags: bar, cocktails, edan, Enzian, film, patio
Want to read the whole issue? Download and read this issue and others on Magzter.