Cirque du Soleil and Disney team up to present Drawn to Life, a show combining acrobatics and animation. 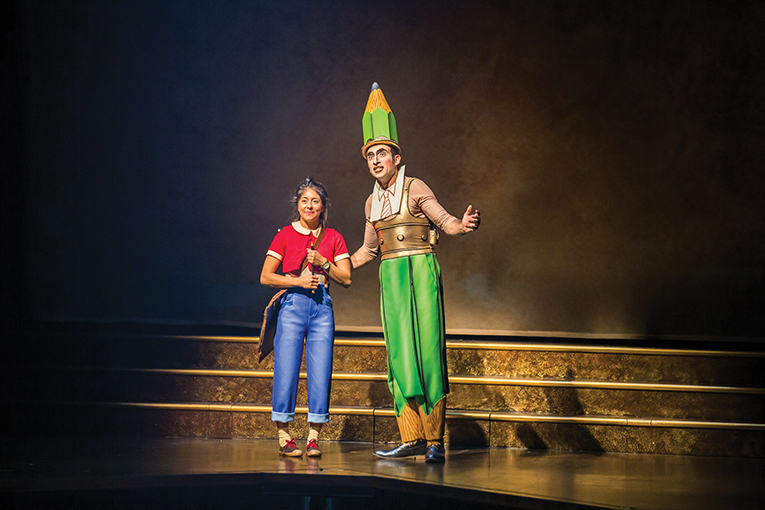 It takes about two hours for dreams to come true in the wonderful world of Disney animated-film happy endings. Some dreams take longer to resolve. A lot longer.

Such is the story of Drawn to Life, the new Cirque du Soleil family friendly animation-themed show, which debuts Nov. 18 in the white tent-style theater at Disney Springs. A years-in-the-making collaboration between Cirque du Soleil, Walt Disney Animation and Walt Disney Imagineering (WDI), the show’s premiere was paused for nearly 20 months after the coronavirus pandemic shut down a planned March 2020 opening. Now, just as the holiday season kicks off, the dream of a new show on the long-dark stage finally will come true for all involved.

“Intermission is now over,” says Daniel Lamarre, president and CEO of Cirque du Soleil Entertainment Group, “and we cannot wait for Cirque and Disney fans to experience the joy of this love letter to the art of Walt Disney animation.”

Drawn to Life, the 50th original Cirque du Soleil production, merges the worlds of animation and acrobatics to create a multi-dimensional theatrical show bursting with wondrous possibility, says Cirque creation director Fabrice Becker. “We were fascinated at how close the two worlds were—the physicality of Cirque du Soleil, and the animators’ work on the physicality of their characters in bringing a drawing to life.” 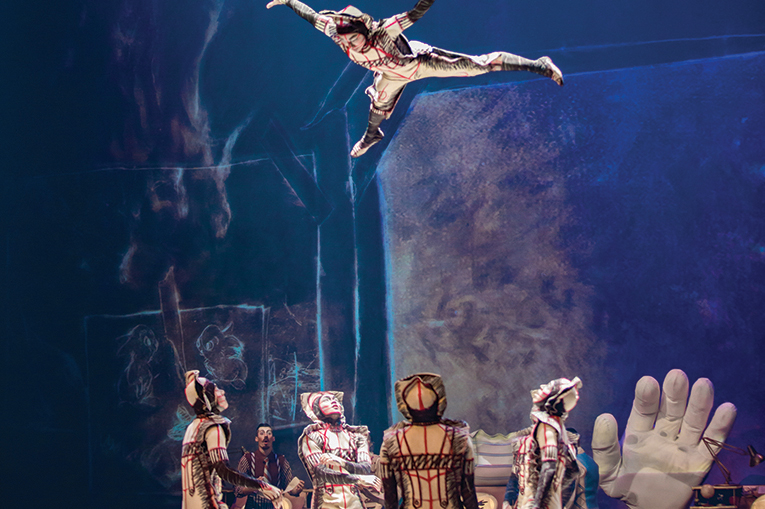 Writer and show director Michel Laprise explains the story of Drawn to Life: Reared by loving parents, 12-year-old Julie always was close to her father, Tom, who “loved, loved, loved animation. Before he passed away, he wanted to leave something for Julie” that would keep him present in Julie’s life, Laprise says. Tom leaves Julie a letter and a gift: a sequence of unfinished animated drawings meant for her to complete. Through his gift, Julie’s father believes, “she will learn passion, courage… and to grow and learn about herself.”

Julie follows her heart and, guided by a colorful cast of characters—including Mr. Pencil, sporting a jaunty pencil nub hat and emerald-green pantaloons—embarks on a creative journey inspired by her childhood Disney memories.

The action plays out on a set designed by Stephane Roy that immerses the audience and the international cast of artists in the animation world and workspace. New technologies and art forms are employed in the show, including digital projections that complement acrobatic feats, and curtains that move on a track to mimic the multiplane camera developed by Walt Disney Studios in 1937.

The 90-minute show with no intermission comes to exuberant life through 10 acrobatic acts that range from breathtaking aerial thrills to dazzling rhythmic gymnastics. The show soars along to an original score written by composer Benoit Jutras and inspired by beloved Disney music.

A Russian Swing performance showcases lithe acrobats in flowing diaphanous skirts as they flip and fly through the air to execute perfect landings on the moving swings. Another routine described as Aerial Pole, inspired by an animator’s “pencil test”—or rough sketch of a scene—presents a lone shirtless, muscled artist climbing, spinning and twisting into limber power poses on an oversized “pencil” dangling against a kinetic backdrop of Disney character sketches. 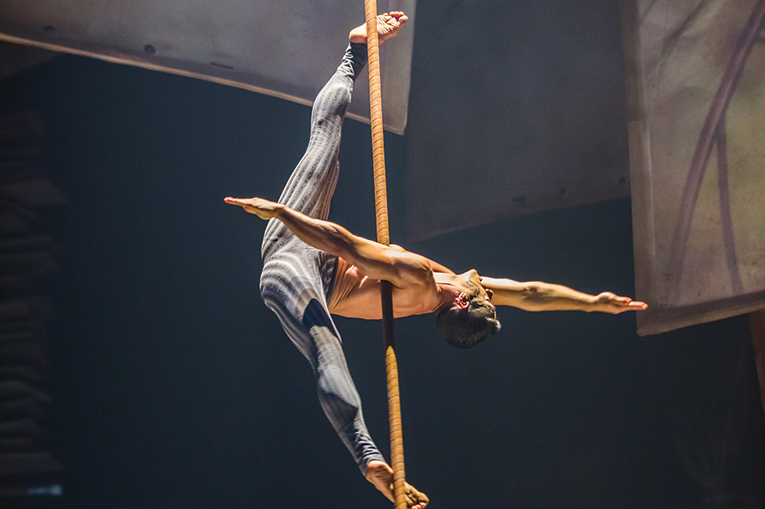 The show’s acrobats often share the stage with drawings and scenes from classic Disney animated films that are projected onto props and backdrops surrounding the live action. There’s new animation, too, created by Eric Goldberg, who is known for his memorable characters such as the Genie in the animated film, “Aladdin,” and his team of animators.

Fans of La Nouba, Cirque du Soleil’s original Orlando show produced exclusively for the Disney theater from 1999 to 2017, will want to watch for the creative team’s “wink or two to the legacy of La Nouba” as the new show goes on, Becker says.

A bonus for children in the audience: They are welcome to join the character of Julie onstage for a drawing session before the show begins.

Developed in partnership with Michael Jung, Executive Theatrical Development, WDI, Drawn to Life “is a story that’s so much about family at its very heart and what that means. The loss of family, and the moving forward. The joy of life,” Jung says.

The new Cirque du Soleil experience will be gift-wrapped for guests in the theater’s refurbished interior, which includes plush new seating and an updated lobby with a WDI-designed homage to the 12 principles of animation. Each principle, such as the “squash and stretch” principle that expands and compresses a character’s body to give the illusion of weight and volume, is illustrated with drawings and images of its use in classic Disney films. The theater upgrades “really bring this show to life in a new, fun way,” Jung says. “I truly believe this show will be the crown jewel of Disney Springs.”

Premiering amid 50th anniversary celebrations at Walt Disney World Resort, Drawn to Life will be performed Tuesday through Saturday at the Disney Springs theater. Information about show dates, times and tickets are at cirquedusoleil.com/drawntolife. Tickets are priced for adults and children ages 3-9. Children 2 and under can attend for free if they sit on a parent’s lap.

This article appears in the November 2021 issue of Orlando Magazine.
Categories: News and Features, Where Orlando
Tags: Cirque du Soleil, Disney Springs
Want to read the whole issue? Download and read this issue and others on Magzter.