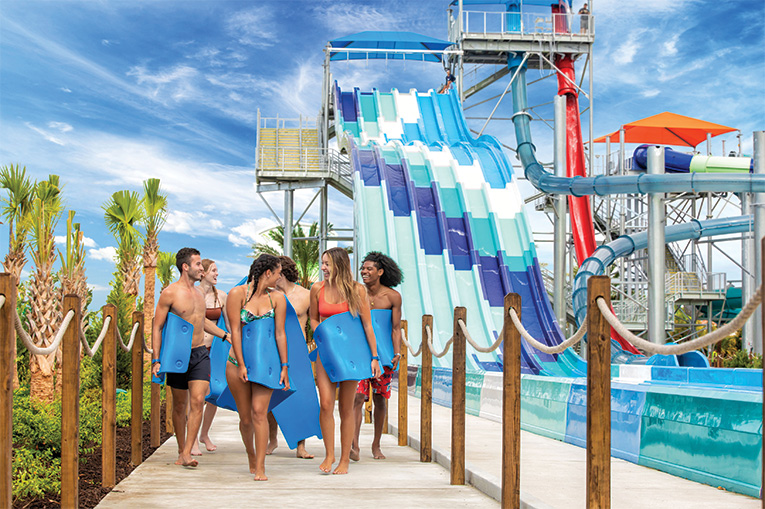 Forty-two years after Jimmy Buffett powerfully persuaded us to search for our lost shaker of salt, you might be able to find it, and much more, at Margaritaville Resort Orlando. Ever since it opened last January at the Highway 192 junction at 429, near Disney’s Animal Kingdom Resort, Margaritaville has been rolling out wave after wave of entertainment amenities for the Parrot Heads it strives to keep on property. The splashiest is its waterpark, Island H2O Live!

The park’s theming is social media. Before you shrug it off with a “meh,” the creative team effectively used the interactive online language to connect with each of the park’s attractions such as Hashtag Heights, Profile Plunger and Reply Racers. The second word of each name sends a clue as to what kind of thrill to expect. The mashup of chutes, slides, walls, waves and rapids keeps the day fun for everyone.

Download the app, strap on the reusable wrist band assigned at check in, then create profiles for each band-wearing member of your group. Wondering how you’ll use an app in a waterpark where your phone will likely be safely stashed in a locker? Stationary kiosks throughout the park make it easy to check in with your wrist band to access all of the features—and there are many.

Check wait times, generally in the single digits during a visit in August. Locate your kids by pressing “find,” and the zone in which their wrist bands are located lights up on the map. View video clips automatically captured during rides and stored to your account.

A couple of housekeeping notes to help you plan your visit: Parking is free but bring your own towels. Food is standard fare (chicken fingers, burgers and pizza) but satisfying. If the park closes early due to weather, they don’t offer rain checks. So get an early start during summer to beat the daily thunderstorms. You know the drill.

You can rent a standard cabana for up to six people, or a cabana suite for parties as large as 16 (there’s seating for 10). All include a call button for personal service. Adult cabanas are located in Private Domain, a dedicated pool and bar area for the over-21 crowd.

Lastly, you have to carry your own tube, raft or mat up the stairs at each attraction, which dims the impulse to shoot straight up for another go. When your kids come off the ride and beg to go again, you can always ask, “Who wants Dippin’ Dots?”­—M.P. 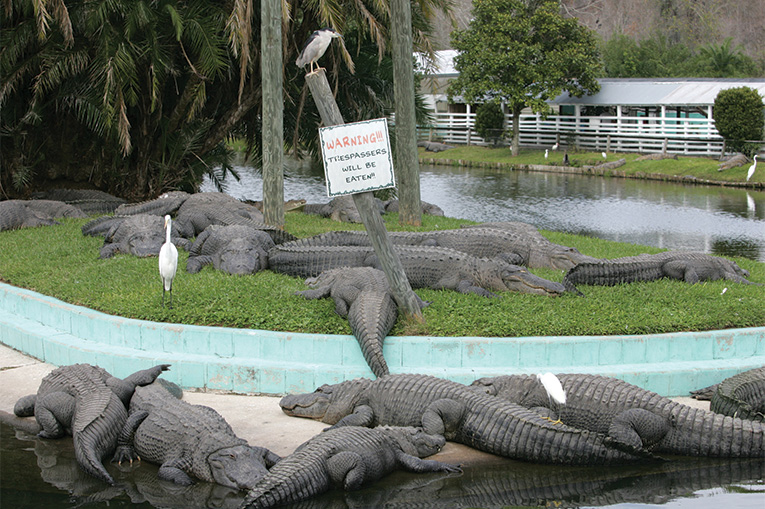 In a city as young as ours, it’s not often we get to huddle around and pay tribute to any attraction with 70 candles on its cake. If it’s been a while, or you’ve never been (gasp!), visit Gatorland. It’s more than the great-grandpa of our area’s unique attractions; it’s also the silly, tobacco-chewing, tough-as-leather great-grandpa who has more chutzpah than the rest of us. Gatorland is a bona fide authentic character.

Did you know that Florida is the only place in the world where crocodiles and American alligators co-habitate? Gatorland is home to at least 3,000 of these ancient-order reptiles, including a beast of a gator named Chester who is sometimes coaxed by trainers to perform a jaw pop—a feat that can crush a turtle shell.  There are a host of other Florida critters— many are rescued—including brother and sister panthers Niko and Lucy and a great horned owl named Athena.

Gatorland makes it cheap and easy for Florida residents to pop in to see the animals and watch the popular shows like gator wrestling (Legends of the Swamp) and gator-baiting (The Gator Jumparoo Show). Want more? There are plenty of  à la cart experiences, like the new Swamp Buggy Tour that you ride through a “backstage” set for a silly off-road romp through the swamp. Be prepared for your kids to ask if they can go again.

Other add-ons include ziplining over the alligator breeding marsh and the Adventure Hour behind-the-fence feeding experience, a close encounter of the toothy kind. —M.P. 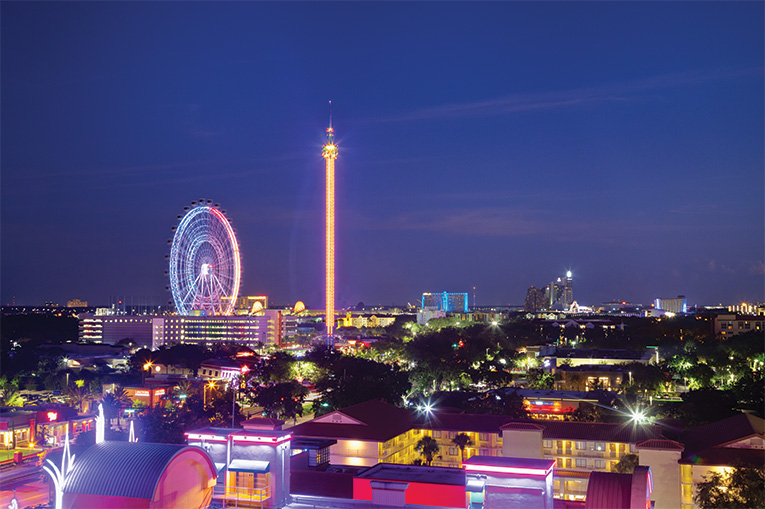 When the sun sets over Central Florida, it’s often as though the whole pink, yellow and purple section of a watercolor set were poured across an infinite canvas. There’s one place where you can count on the light show to continue after dark: The Wheel at Icon Park. Its changing color displays represent national holidays, days of remembrance and those of celebration. Its lightscape has become Orlando’s Empire State Building, and the beacon for amusement attractions along I-Drive.

Haven’t ridden it yet? Head to Icon Park with an open mind. If The Wheel seems too much your grandma’s speed, then ride the Orlando StarFlyer instead—more like catching a ride in your nephew’s tricked-out Chevy. For that one, pick a trusted friend to sit beside you as you white-knuckle the chains from which your swing flies around a 450-foot pole at speeds up to 45 mph. It’s terrifying, and also big fun. If you buy it as a package with the staid Wheel, we suggest you knock the StarFlyer out first then sit back and relax for The Wheel’s 23-minute ride.

Icon Park is but one of the many attractions along a 10-mile stretch of I-Drive that parallels Universal Boulevard and is bookended with Universal Orlando Resort and SeaWorld. The strip malls packed with kitschy tourist traps have nearly all been replaced by attractions that are as fun for locals as they are for visitors.

Here are some of the “funnest’’ kicks on the block:

This article appears in the November 2019 issue of Orlando Magazine.
Categories: News and Features
Tags: attractions, gatorland, I-Drive, international drive, Theme, theme-parks, water park
Want to read the whole issue? Download and read this issue and others on Magzter.