It’s been three decades since we welcomed our very own NBA team. A veteran sportswriter who covered the Orlando Magic from the start recalls what a long—and sometimes strange—trip it’s been.

Does it feel like 30 seasons ago? Actually, yes it does. Thirty basketball seasons represents half of my lifetime, with a considerable amount of that time spent with the Orlando Magic, chronicling the franchise’s 30-year history. The passing decades bring with it receding hairlines and increasing waistlines, but for the Magic as a team of changing players … well, they stay forever young. But never were they as young as they were 30 seasons ago, in the fall of 1989, when the Magic arrived in Orlando as a fledgling franchise, looking to find their footing in the NBA.

I was at that first practice, held at the old UCF gym. The PR guy was an eager and affable 25-year-old fellow with an authentic smile and demeanor. His name was Alex Martins. He seemed like a junior version of their handsome head coach, who genuinely seemed to enjoy chatting with us in the media, usually flashing a friendly smile that lit up his eyes. His name was Matt Guokas. Martins went on to become the Magic CEO, and Guokas became a media member, broadcasting Magic games until 2013, when Martins and the Magic declined to renew his contract.

Yeah, a lot happens over 30 NBA seasons—and what a long and often strange trip it’s been. 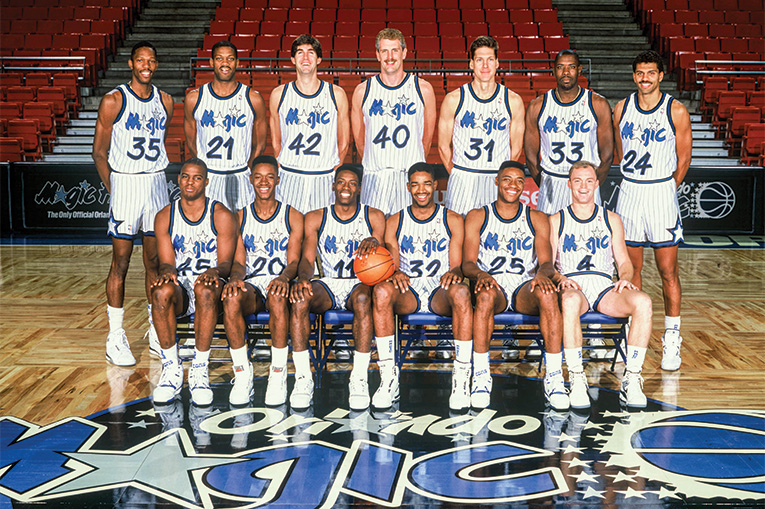 Like you, I remember the player names from that first team as if they were etched in a box score from this morning’s newspaper: Scott Skiles, Terry Catledge, Reggie Theus, Jerry Reynolds, Sam Vincent, Sidney Green, Nick Anderson, Otis Smith, Jeff Turner, Mark Acres, Michael Ansley, Morlon Wiley, Dave Corzine and Jawann Oldham. Jawann Oldham? Okay, maybe not Jawann Oldham. But as for the rest of those names, you can close your eyes and see them in their pinstriped jerseys, running around the court at the old Orlando Arena, with PA announcer Paul Porter’s distinctive voice booming off the walls. Memories are like that. They cut through decades at warp speed, arriving at images and sounds and even emotions that never seem to fade with time.

Those were the original names. And then came THE name— Shaquille O’Neal. Or simply Shaq, as we called him, especially that night in 1992 when he was drafted first overall out of LSU, and the Magic serenaded an Orlando Arena draft party by blaring the B-52s’ hip-shaking tune “Love Shack.” And oh, how we loved Shaq—so young, so fun and, most importantly, so, so very good. I was a newspaper sports columnist back then and I remember one time Shaq didn’t feel like doing an interview, and with mumbling words and that crooked grin he apologized for turning me down. Then he stuck out his hand to shake, as if to ensure that all was good. So I shook his hand and when I did it felt like I was shaking hands with a baseball glove.

Those early seasons were—dare I say it?—magical. Just one year after securing Shaq with the first-overall draft pick, the ping-pong ball fell the Magic’s way again, and with 1993’s first-overall pick they selected Chris Webber and promptly traded him for a few future first-round draft picks and a point guard named Anfernee Hardaway, whom you remember better as Penny.

The foundation was set for a dynasty, but not just because of Shaq and Penny. Getting them via first-overall draft picks were no-brainers. It was the two lower first-round draft picks before them—Nick Anderson in 1989 (11th overall) and Dennis “3-D” Scott in 1990 (4th overall)—that solidified the foundation. In those first five years, the Magic drafted their core four future. But then, for the next quarter century, the franchise became mired in mostly miserable first-round draft picks (see: Jeryl Sasser, Geert Hammink, Michael Doleac, Johnny Taylor, Keyon Dooling, Reece Gaines and Fran Vázquez, to name just a handful—although, to be fair, the jury is still out on Fran Vázquez).

But with Shaq, Penny, Nick and 3-D, the Magic had the ingredients for a run of NBA championships, made complete when, before the 1994-95 season, they added via free agency the be-goggled power forward Horace Grant. Grant’s arrival was significant, not just because he was a solid player, but because of his postseason pedigree. Grant had played on not one, not two, but three championship teams with Michael Jordan and the Chicago Bulls. I remember going to Ronnie’s restaurant on Colonial Drive many times as a boy. Years later, I had lunch there, sitting at a booth with Grant, working on a story for the magazine you’re now reading. I knew Grant was going to be special, and it was obvious the Magic had something special going on. With that great young team the wins came in bunches. So did the fun, which was always punctuated by The Fat Guy circling the arena in joyful delirium and announcer Porter whipping the crowd into a fun frenzy.

Sure enough, in that first season with their Fab Five, the Magic motored to the NBA Finals … only to have the Houston Rockets sweep them. It felt as if the new kid on the block had been beaten up by the neighborhood bully. As quickly as the NBA Finals ended, so did the Magic’s burgeoning dynasty. A year later, after getting a lowball offer from owner Rich DeVos and getting dissed by fans in an Orlando Sentinel poll that implied he wasn’t worth the money, Shaq called Orlando “a dried-up pond” and bolted for the left coast, where he joined forces with Kobe Bryant and won three NBA titles for the Los Angeles Lakers. It hurt. It still does.

As epic of a disaster as Shaq’s departure was for the Magic, it was but the first of a series of bad dance moves the franchise had with its franchise players. Some were not the Magic’s fault—e.g. the injuries that debilitated the careers of Penny Hardaway and Grant Hill. To be sure, though, signing an already-injured Hill to a massive free agent contract wasn’t the organization’s most prudent decision. And allowing Hardaway to lead a revolt that got head coach Brian Hill fired remains a black eye, if only because it happened again when the organization allegedly capitulated to Dwight Howard’s demands that head coach Stan Van Gundy be jettisoned. According to Van Gundy, Howard issued the front office an ultimatum—either Van Gundy goes, or he goes. With Howard’s pending free agency looming, the Magic fired Van Gundy, the winningest coach in their history, who led the team to the playoffs in all five of his seasons here.

A narcissistic goofball, Howard entered the NBA with a self-proclaimed mission to Christianize the league. Instead he impregnated a Magic Dancer, the first of a handful of women with whom Howard fathered out-of-wedlock children. Former Magic CEO Bob Vander Weide claims Howard once told him that he was an icon on par with Michael Jordan, Muhammad Ali and (a pause here for dramatic effect) Nelson Mandela. Unable to re-sign him, even after firing Van Gundy, and knowing Howard intended to leave via free agency, the Magic traded their Dwightmare to the Lakers before the 2012-13 season—the first of five teams Howard has bounced around with since.

And while on the topic of superstar talent gone sour, let’s not neglect Tracy “T-Mac” McGrady, an elegant and prolific scorer who clashed with John Weisbrod, a hockey guy whom the Magic for some reason thought would make a good NBA general manager. Being the tough puckhead, Weisbrod bristled at T-Mac’s perceived malingering and traded him to the Houston Rockets.

Put it all together and not one of the Magic’s superstars became an iconic wire-to-wire career player for the franchise. Hence, the rhyming nickname sometimes ascribed to the Magic—Tragic.

This is not to overlook that these players were stars, because they did dazzling things. T-Mac once scored 62 points in a victory against the Washington Wizards. Scott Skiles once doled out 30 assists on a night when the Magic scored 155 points to beat the Denver Nuggets. Then there was The Steal in the 1995 Eastern Conference Semifinals. With only seconds left and the Chicago Bulls leading by a point, Nick Anderson tapped the ball away from Michael Jordan and into Penny Hardaway’s hands. Penny led a fast break before delivering a bounce pass to Horace Grant, who smoothly sank a game-winning layup. And it was Anderson who also provided that giddy moment when, in Shaq’s first game back in Orlando, he hit a game-winning three-pointer before strutting down the floor mimicking Shaq’s neck-bobbing chicken dance. And, yes, we must mention that in 2009 Dwight Howard led the Magic to their only other NBA Finals appearance. They lost that one too, though thankfully it was 4-1 instead of a sweep.

It hasn’t been just a conga line of star players the Magic have seen come and go. It’s been quite a coaching carousel too, going from Matt Guokas to Brian Hill to Richie Adubato (whose autobiography I’m currently co-authoring) to Chuck Daly to Doc Rivers to Johnny Davis to Chris Jent to Brian Hill (again) to Stan Van Gundy to Jacque Vaughn to James Borrego to Scott Skiles to Frank Vogel and now to Steve Clifford. 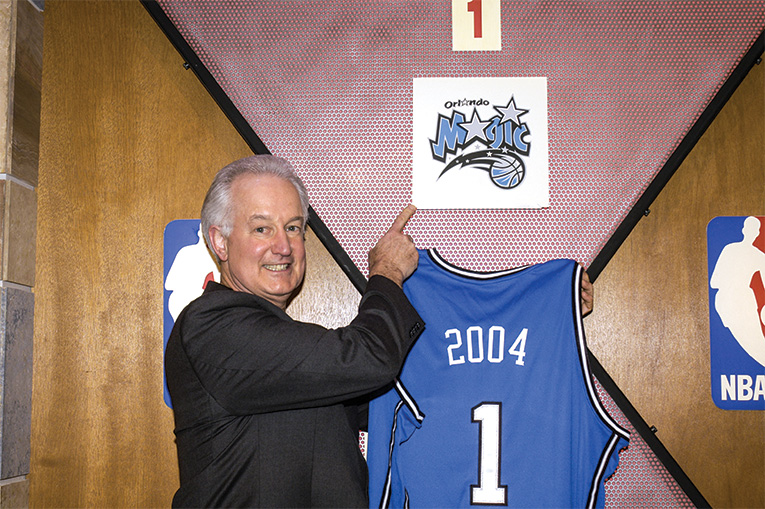 Pat Williams celebrates the No. 1 draft pick in 2004. (COURTESY OF ORLANDO MAGIC)

Ownership has been more stable—sort of. I got to know former CEO Bob Vander Weide through another story for Orlando magazine. Vander Weide and I maintained a casual relationship, both of us being the same age. I always sensed he was desperate to prove he wasn’t just a pretty boy who rose to CEO by marrying the billionaire owner’s daughter—although it was obvious that didn’t hurt. It all ended abruptly for Vander Weide after an unfortunate series of events:  his marriage fell apart, his father died, and he allegedly drunk-dialed Dwight Howard in the middle of the night. For sure, though, it was his messy divorce from DeVos’ daughter Cheri that got him shown the door.

Vander Weide and Horace Grant weren’t the only subjects I wrote about for this magazine. Others have been Alex Martins, Julius Erving, broadcaster David Steele, Dwight Howard, forward Ryan Anderson and Frank Vogel. I especially remember sitting with Dr. J, whom the Magic brought in ostensibly to mentor young players—another disaster. Dr. J was one of my favorite players growing up (my on-court nickname was Dr. K) and I remember he was wearing a Nike cap that he absent-mindedly left behind after the interview. For a split second I thought about keeping it as a memento. But I couldn’t do that, and I tracked him down to return it.

And then there is my friend Pat Williams. I’ve written two stories on Pat for this magazine and also co-authored his 100th book. I once sat with him during a chemotherapy session in his ongoing battle with multiple myeloma. As the poison designed to save his life coursed through his veins, we talked about life, the years peeling away. Pat was at that first practice 30 seasons ago, when he was their charismatic general manager and celebrated as the man who brought the Magic to Orlando and started this joyous and at times disjointed journey. He’s lived through all the players, coaches, general managers, ownerships and Rich DeVos’ recent death and the heir’s announcement that the Magic will remain in the family as they move into their next 30 seasons.

Pat is 78 now; I am 60. I interviewed him at that first practice, in the days before cell phones and the internet, when hair was big, Martin was Short, Harry met Sally and the pop charts were dominated by Paula Abdul, Janet Jackson, Richard Marx and Milli Vanilli. Not many of us are still around who rode this Magic journey nonstop from the beginning to where it is today.

And, yeah, it does feel like a long, long time ago.