Music With a Mission

Sharing and serving are at the heart of the Swamp Sistas, a grassroots movement made up of women who give back.

A group of women sit in a circle—what they call a songwriting circle—as keyboardist and singer Beth McKee breaks out in a voice reminiscent of Janis Joplin and plays a spiritual called “The Welcome Table.” It’s a song well-suited for the opening of a fundraiser for Second Harvest Food Bank of Central Florida. The other women join in—singing, playing guitar, and improvising percussion.

These local songwriters are members of the Swamp Sistas, a “movement of women with two things in common: a passion for music and the desire to help others,” founder McKee says. The musicians were rehearsing for an eight-hour concert staged during the Orlando International Fringe Theatre Festival in May to raise money for Second Harvest and awareness of Central Florida’s hunger problem. The group exceeded its goal, eventually raising $10,176, and McKee herself came away with the festival’s Outdoor Stage Award.

The Swamp Sistas originated as a Facebook group in 2010 as a way for McKee to stay connected with women friends she met while on tour as a solo artist throughout the South. Since then, the online group has grown to nearly 2,600 members. The chimera organization—equal parts support group, philanthropic group, performance group—is still evolving. The band draws its members from the songwriting circle, and acts as a vehicle for bringing people together and spotlighting the larger group’s causes. 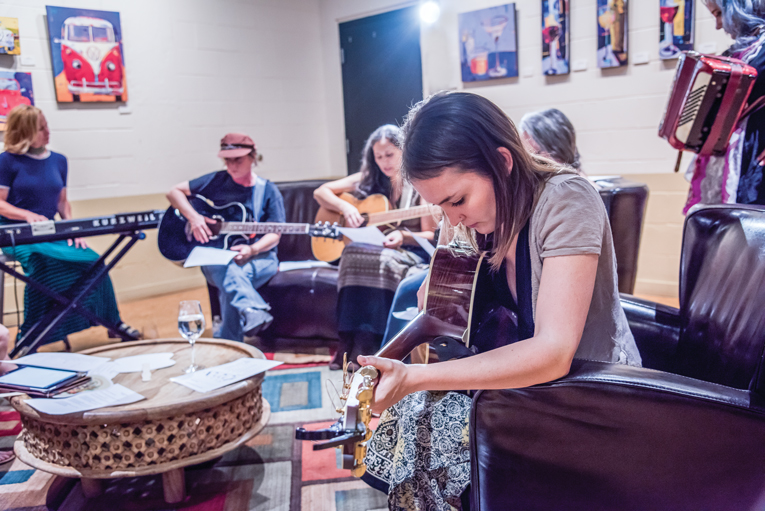 Hannah Harber, the youngest member of the songwriting circle, also headlines her own band (ROBERTO GONZALEZ)

“It became a network of women who had the same mindset, mainly that we all love music,’’ McKee says. “As time began to pass, I started seeing a real supportive vein with people reaching out and supporting each other—musicians, artists, teachers, lawyers. If anyone came along and needed a little boost, everyone would be right there for them. I started trying to think of a way for everyone to get together in person.’’ That’s when the New Orleans transplant came up with the idea for “La Las,’’ a term for a Creole gathering for a cause.

“One thing that I observed in the time I lived in Louisiana was the community spirit when people would come together to have fun and simultaneously do something good, whether at church or in a community organization,” she says. “When everybody comes together to accomplish a goal, the feeling that everybody gets from doing it is almost as meaningful and rewarding.”

For the 11 members of the Swamp Sistas songwriting circle, giving comes naturally. Twenty-eight-year-old Hannah Harber, a singer/acoustic guitarist, is the circle’s youngest member. “As women, whether we know it about ourselves or claim it, we nurture. When you get 2,500 women in a collective led by a nurturer, that’s what you do.”

The sense of nurturing is evident in the circle, where musicians affirm and encourage one another. Acoustic guitarist/percussionist Tracey Gibbs says the Swamp Sistas have helped her find her voice. “Now I feel as if I’m coming into my own for the first time, taking a leap of faith and serving [the community] on top of that. It’s fulfilling.”

Sista Shadow Pearson chimes in, “The first thing that we did was serve each other. Then that started growing into something bigger.”

Members of the circle are all chosen by McKee. Aside from performing with Swamp Sistas, each also performs either as a solo artist or as a member of another group. For instance, Harber leads Hannah Harber & The Lionhearts, while Pearson is lead singer/keyboardist for local band The Actomatics.

“In early 2014, I started hosting a songwriting series at The Smiling Bison on the first Thursday of each month,” McKee says. “I’ve gotten to know lots of local songwriters, male and female, through that series, which became the basis for the group membership.”

The collective—whose musical style ranges from folk to hip hop—gathers monthly at McKee’s house to collaborate on original songs based on a word or phrase that McKee gives them the previous month.

The women performed together for the first time at last year’s Orlando Fringe Festival, “and it was magic,” McKee says. “I began to nurture the group as a performance collective with the idea of using various combinations of members to appear in-the-round at fundraisers and festivals.” The members—some of whom are established in their musical careers and others who are just getting started—perform at La Las together and with their own bands.

Before participating at Fringe, the group held La Las at Park Avenue CDs and East End Market to benefit Hebni Nutrition Consultants and the P.E.A.S. Foundation, Orlando-based organizations that fight food insecurity and promote nutrition education. In addition, McKee has led La Las with North Carolina-based members of the Facebook group in Boone, N.C., to benefit local charities, many of which are food-based. This year she was joined by Orlando Sista Terry Binion, who was touring to promote her latest album.

The band recently released its first album, La La Summer Sampler, a 17-track collection of songs by various acts that have appeared at the four Orlando fund-raising concerts. Free downloads of the album, along with access to live performances, were among the perks offered in exchange for donations to benefit Second Harvest.

McKee and her crew even invested some sweat equity in the event. “The Swamp Sistas did a volunteer night where they packed onions,” says Second Harvest’s vice president of development, Greg Higgerson. “Then,  smelling like they did, they came in and did a full hour and a half show.”

To Gibbs, it all comes down to the age-old concept of sowing and reaping in the group’s effort to make an impact on society. “We’re taking a plot of land, and we’re tilling the ground and planting seeds. As long as we’re putting in the work, we’ll see the fruit of the effort.”

Learn more about the Swamp Sistas and hear them in action at www.swampsistas.com