A nondescript condo kitchen gets a makeover with high-end European flair.

Pamela Loudon and her husband, Jerry, bought their downtown high-rise condo at The Vue in 2009. Loudon, an artist and photographer whose large-scale works demand space, appreciated the tall ceilings and white walls reminiscent of an art gallery. But the kitchen was not her style.

“It was generic,” Loudon says, “with dark wood cabinets and a basic stainless steel sink. It looked like an afterthought with the rest of the space.” There was one saving grace: a large Sub-Zero refrigerator, which was the only appliance Loudon kept post-remodel. 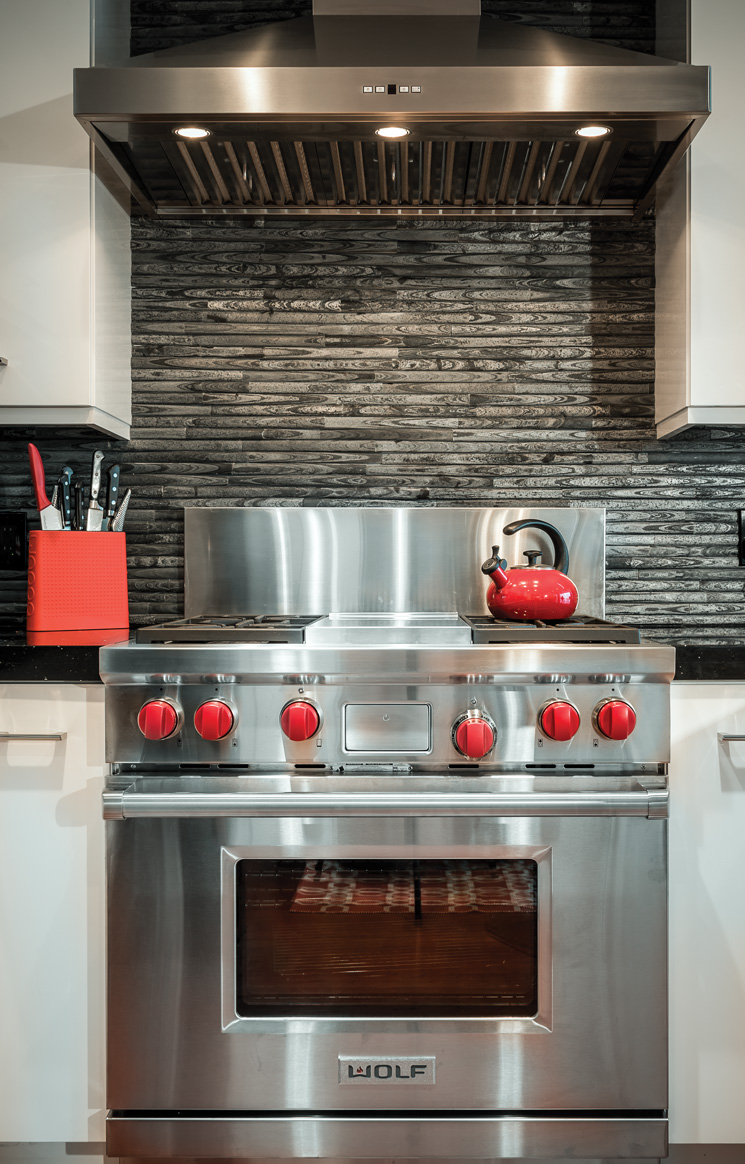 The unique gray stone backsplash extends high on the wall, while the knobs on the Wolf range provided the inspiration for pops of color. (ROBERTO GONZALEZ)

She worked with Blue Daze Designs in Orlando and ultimately got what she wanted: a kitchen that would flow with the modern, gallery-like space—cool and white with lots a chrome and splashes of color throughout.

At the top of her wish list was cabinetry modeled after the German kitchen brand Poggenpohl. “They are super expensive,” says Loudon, “so I needed a cabinetmaker who could do white acrylic laminate.” Enter Scott Riley of Cabinet Designs of Central Florida in Rockledge. The company designed and built the sleek cabinetry to fit Loudon’s needs and utilize wasted space.

Joshua Allen of Orlando’s AA Tile & Stone installed new black granite countertops and created a “waterfall” look by extending the granite vertically at the end of the counter. The effect contributed to the kitchen’s overall contemporary Poggenpohl look.

One of the surprising dramatic features of Loudon’s new kitchen is the gray-tone backsplash. “It’s the first thing people see and comment on,” she says. “The backsplash is a stand-alone art piece” made of ½-inch, raised, bamboo-like pieces of stone.

New appliances included a Viking microwave/convection/steamer built-in oven and a Wolf range with bright red knobs, both from Aggressive Appliances in Orlando. Loudon tied everything together by adding playful red accessories.

And now her kitchen fits perfectly with the rest of her art gallery/living space. “My new kitchen looks great,” Loudon says. “You know you were successful when your guests say, ‘Oh my, is this Poggenpohl?’ ”