A young cellist and conductor with the world on a string leads the Orlando Philharmonic into a new era.

The new maestro won’t make his official debut until later this month. But he’s already made quite an impression.

Thirty-three year-old cellist and cutting-edge collaborator Eric Jacobsen will conduct the Orlando Philharmonic Orchestra for the first time as its new music director in an Oct. 24-25 concert at the Bob Carr Theater. Five days later, he’ll lead the orchestra in accompanying the Orlando Ballet in two performances of Giselle at the Dr. Phillips Center for the Performing Arts.

He deserves all the inaugural hoopla he’ll be getting. But it’s not as if he’s a stranger in town.

Since winning the position over 300 applicants and four other high-profile finalists last spring, he’s already staked out his favorite Central Florida restaurants (The Ravenous Pig, Cask & Larder); discovered a ping-pong table to his liking (through the front door and to your left at The Hammered Lamb); made a preliminary house-hunting run through Orlando neighborhoods (College Park has the early lead); and, oh yes, slipped into town from his home in Brooklyn when the Philharmonic needed a cellist to round out a chamber-orchestra ensemble last summer.

Which was something like an NBA coach swapping his designer suit for a jersey and loping onto the court to bang the boards for rebounds. 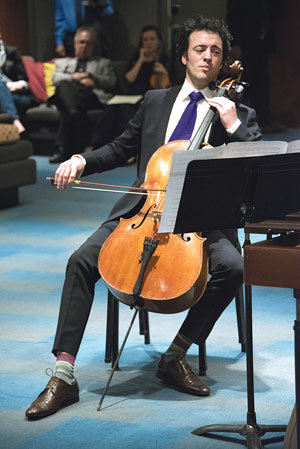 Come to think of it, Jacobsen was wearing gym shoes, bright blue gym shoes, when he flew in from New York for rehearsal with a half-dozen musicians in an otherwise empty auditorium.

All of them were orchestra regulars who had already worked through the pieces together, so the rehearsal was mainly a matter of getting the new guy up to speed. The chances of that happening looked pretty good, given that the new guy was a world-class cellist with the musical DNA that comes from being born into a chamber-orchestra version of the Von Trapp family.

His mother was a flutist in the Metropolitan Opera Orchestra. His father, who can remember accompanying Luciano Pavarotti, was its co-concert master and first violinist. His older brother also took up the violin. In a household where being paired up with an instrument was as inevitable as having a toothbrush of your own at the bathroom sink, Eric wound up with a cello, partly because he was big for his age, but mainly because it filled a gap in the family string section. Or as he puts it: “By the time I came along, there was already enough treble in the house.” The home was a gathering place for impromptu dinners followed by living room concerts that combined family members with musically inclined guests.

Both boys graduated from Juilliard, then created a small orchestra collective of their own, The Knights, taking on everything from Shostakovich to Jimi Hendrix and performing with the fabled likes of violinist Itzhak Perlman and cellist Yo-Yo Ma. They also formed a string quartet, Brooklyn Rider, which has been credited by The New York Times, among others, for modernizing a musty genre with inspired interpretations of classic works complemented by rock-star compositions of their own. “Forgive the hyperbole,” wrote Greg Cahill, editor and owner of Strings magazine, “but I have seen the future of chamber music, and it is Brooklyn Rider.”

The future of chamber music—one quarter of it, anyway—has dark, unruly, crazy-composer hair, whooshed back from his forehead like tumbleweed against a barbed-wire fence. He is lanky and athletic: Asked about early influences, he mentions his high-school tennis coach in the same breath as his cello tutor, the legendary Harvey Shapiro.

When he turned up for that rehearsal last summer, Jacobsen strode down the aisle of the auditorium with a springy gait, put the flat of his hand on the apron of the stage, and vaulted straight up onto it like a jack-in-the box. Then he shook hands and exchanged pleasantries with the other musicians before taking his cello out of the case and settling into his place in a center-stage semicircle of five folding chairs.

They had two pieces to catch him up on: Variations for Bassoon and String Quartet by Anton Reicha, who was a classmate and close friend of Beethoven’s, and Quartet in F Major by Mozart, who became an early, particularly inspiring idol to Jacobsen, partly for his propensity for occasionally punctuating his otherwise ethereal music with bathroom humor. (“I was amazed. That was allowed? He could do that? He could be funny, besides being, you know, God?”)

During the rehearsal, the musicians spent much of their time ironing out the tempo changes from one variation to another in the Reicha piece. They would play a section, pause to talk it over, then try it again, communicating with body language as much as anything, dipping their shoulders forward in exaggerated unison each time they began anew. Listening to them refine the piece was like watching a fuzzy image coaxed into clarity through the viewfinder of an expensive camera. Once, when they hashed out the bowing and nailed one of the variations to their liking, Jacobsen leaned back in his seat with a wide grin on his face, as if he’d just devoured a wonderful meal, and said:

He sounded like a sweaty skateboarder celebrating a tricky maneuver.

“I’m finding him to be enthusiastic,“ said the bassoonist, Diane Bishop, a dedicated musician with a flair for understatement.

“He’s just so humble,” said the violinist, Alexander Stevens. “He kept asking us if there was anything he could improve.”

That seems to be the consensus.

Traditionally, conductors are above it all, literally and figuratively, radiating glamour and gravitas. Jacobsen has all the graciousness and aplomb you’d expect, given his background, but he’s rooted in other ways, literally and figuratively. He’s a down-to earth foodie/gardener with an herb and vegetable garden back home in Brooklyn, one that he worries about: His touring schedule is so intense that the cucumbers, romaine lettuce, red leaf kale and a wide-ranging spectrum of herbs sometimes go unpicked. Entertaining friends and cooking for them is so entwined with music in his psyche that he sometimes fantasizes what his life might have been like had he wound up going into the restaurant business. (“It could have been a path,” he muses.) He has performed in great concert halls throughout the world, but he is equally excited about discovering Will’s Pub, the humble, funky Mills 50 indie-music hub, where he will perform with his cello as part of the Accidental Music Festival in December.

Soon after he got the phone call offering him the conductor position last spring, Jacobsen confirmed his acceptance in one of his callbacks by saying: “It’s on!”

“Here’s what I like about Eric Jacobsen: He is never not himself,” says the recipient of that call, R.K. Kelley, the Walt Disney World exec and incoming symphony board president who headed the search committee.

At her insistence, half of the 12-member committee had consisted of Orlando Philharmonic musicians. The orchestra is filled with experienced players—the kind of musicians who rankle at a conductor who micromanages the life out of them, using “too much stick,” as they call it, rather than allowing them interpretive elbow room. They want what most people want in a boss: Someone to leave them be when they know what they’re doing, and help them out when they don’t.

Jacobsen appears to fill the bill.

“He is, first of all, a musician’s musician,” says the orchestra’s executive director, David Schillhammer. “He is so agile and beautiful with his baton. With him they have the chance to really soar.”

The other half of the equation for the new conductor is pleasing the Philharmonic’s customer base and inner-circle supporters, many of whom were both puzzled and dismayed when the orchestra board voted not to renew the contract of the previous conductor, Christopher Wilkins. That decision was triggered by artistic differences that were never publicly aired.

When Jacobsen came to town as a guest conductor last January, he provided a glimpse of the broad-ranging focus he has in mind for the orchestra by choosing a program that combined traditional works by Rimsky-Korsakov and Debussy with one of the most exotic pieces the orchestra had ever played: a new concerto by Chinese composer Zhao Jiping that features a pipa, an ancient, hypnotic, pear-shaped Asian string instrument that can bring tears to your eyes, at least as it was played by guest soloist Wu Man.

Jacobsen knew of the work and the soloist because of his involvement with an international music initiative called the Silk Road Foundation, founded by Yo-Yo Ma to bridge the musical gap between Eastern and Western cultures. It’s a point of pride with Jacobsen that the Philharmonic was only the fourth orchestra in the world to play the Jiping concerto.

This month, for his debut as the Philharmonic’s music director, he has chosen a similar blend of old and new, combining traditional works by Beethoven, Tchaikovsky and Ravel with a world premiere of a composition by his friend, the young singer and composer Gabriel Kahane, who blends classical influences with folk and pop.

“I knew he was writing the piece,” says Jacobsen. “I just asked him to write it a little faster.”

Eric and his brother, Colin, live in a three-story brick house in Brooklyn that they bought four years ago. They are extremely close. Their mother died in an automobile accident on the way home from a performance when Eric was a teenager. He keeps his cello wrapped up, inside its carrying case, with a brightly colored dress she once wore.

Colin, who has pursued composing as well as playing the violin, lives on one floor of the house with his wife. Eric lives on another with his girlfriend of three years, bluegrass singer Aoife O’Donovan.

This first season will be a transitional year for the Philharmonic’s new leader, but once he is settled in, he visualizes himself shuttling between the Brooklyn outpost and a home in Orlando he’ll share with Aoife (pronounced EE-fa). He’s thinking there may be a dog, too, and perhaps a second home garden in the backyard, and most certainly lots of hungry guests bearing musical instruments at the door.

He says he wants to revere the classics, as he always has. (In the programming he developed for this season, he’ll be focusing on one of his favorite composers, Ravel, as a through-line). But he also wants to mine his connections in order to turn Orlando into a “breeding ground” for new projects, new music, new collaborations. It will be interesting to see how he balances out that ambition, as he knows he must, with the expectations of the orchestra’s audience, which tends to be an older crowd.

It wouldn’t hurt if he attracted a few younger fans into the fold. He’s a maestro for the new millennia, a hipster homeboy with the world on a string.

“The sky is the limit for him, and this is an important step in his career,” says Schillhammer. “Someday, when he’s gone on to the New York Philharmonic, maybe, we’ll be saying: ‘Oh, sure. Eric Jacobsen? He was our music director once.’ ”