Why a short flight to Cancun will captivate you.

Megan Padilla,
On the surface, Cancun may seem like a Vegas strip of beachfront mega hotels on the tip of Mexico’s Yucatan Peninsula. Dig a little deeper, and you’ll find there’s more to it than mariachis and margaritas. The magic of the Mayas is all around, from the San Miguelito settlement abandoned some 800 years ago and preserved right in Cancun’s Hotel Zone, to the crown jewel of the entire Maya civilization—the city/state of Chichen Itza, roughly translated as the “city of the water sorcerers.” You wouldn’t be the first to wonder if the ancients themselves don’t have something to do with the impossible shades of turquoise and emerald that make the beaches among the most beautiful in the Caribbean.

Getting there is easy: JetBlue offers a two-hour direct flight from Orlando to Cancun, and with the one-hour time change, you can arrive in time for breakfast. 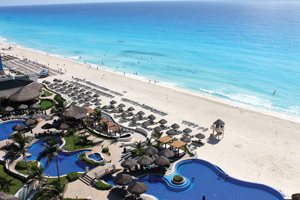 First, indulge in some of the area’s modern pleasures. The JW Marriott Cancun Resort & Spa, about a 25-minute taxi ride from the airport, is a good place to start. At the swim-up bar, order a chelada, common in this part of Mexico and composed of your favorite Mexican lager poured over fresh lime juice, ice and served with a salted rim. Or stake out a lounge chair on the beach, shaded by a thatched palapa, and enjoy (or ignore) the local hawkers who pass by offering for sale everything from sunhats to cigars. At some point you’ll want to check in with the concierge (if you haven’t already made arrangements) to plan a day trip to the ruins at Chichen Itza, because to understand the region’s magic, you must begin at the source.

A two-hour drive inland takes you to one of the largest and most studied Maya cities in the region. If you’ve visited other Maya sites and think you’ve got it covered, you would be mistaken. Hire an official guide at the entrance (a worthwhile expense) for a two-hour tour of the most important structures in the ceremonial plaza.

Most guides are descended from the folks whose rituals and customs you will imagine being played out as you spend time on this sacred ground.

A thousand years ago, Chichen Itza was a seat of power, made so by the arrival of the Itzaes, who traveled by sea and were both warriors and merchants; the city’s high priests influenced hearts and minds throughout the region. So spiritual was Chichen Itza that pilgrims continued to worship at the Sacred Cenote, believed to have been a portal to the underworld, for centuries after the city was abandoned (by 1250 A.D.). Even today, there is an undeniable magic to this place.

Visit during the equinox on March 20 or September 23 of this year when, for a precise moment, the sun and shadow casts a serpent’s shape down the grand pyramid called El Castillo, the precise embodiment of the Mayas’ solar calendar. Try this: stand dead center at the base of the north staircase between the two stone serpents and clap your hands. An almost electronic-sounding “ping” echoes through the enormous ceremonial plaza. This is no accident; it was the mathematical and structural plan of the Mayas to be able to mimic the sound of the sacred Quetzal bird. These were people who held mathematicians and astronomers in nearly the same esteem as royalty. 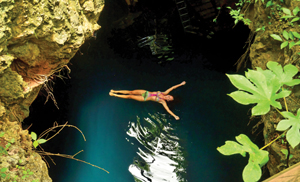 Before parting ways with your guide, extract some chilling descriptions of human sacrifice (you’ll feel especially sorry for the females who had no say in being offered by their family). Then follow the same path the Mayas trod to reach El Cenote Sagrado. The sacred cenote is an enormous fresh-water sinkhole in the jungle floor where the Mayas are believed to have worshipped Chac, the god of rain, and most certainly offered human sacrifices. Without water to grow crops, people would starve; and without sacrifices to beg the favor of the gods, water—and life itself—could be withheld.

Top off this once-in-a-lifetime day with a swim in a cenote. Don’t worry, most were used strictly as sources of fresh water (there are almost no rivers or streams in the region). Thousands of these sinkholes can be found throughout the Yucatan; some are open air and others are inside caves. Xkeken is a great choice, located near Chichen Itza in the city of Valladolid.

Descend underground on stairs carved from stone, leading to an enormous water-filled cavern ensconced with millions-of-years-old stalactites, which give the appearance of hundreds of giant ice cream cones melting from the ceiling. Flood lights above and beneath the water transform a potentially spooky spot into an enchanting experience. As you float on your back in the slightly milky, aqua-colored water and watch bats flit in and out of the cavern’s rooftop opening (from the jungle floor above), contemplate the importance of this life-giving water to the generations who have called this region home for more than a millennium.

Back at the hotel, it’s time to bring this day of sacred water full circle by indulging in the healing properties of salud para agua (health by water). Follow up a Maya-inspired spa treatment at the JW Marriott with the full hydrotherapy circuit of steam, sauna, cold and then hot pool. Spread a towel over the hot tiles of the steam room then await the next cycle as eucalyptus-infused vapor escapes from the large ceramic Maya head that holds court, never letting you forget that when in Cancun, the ancients are always with you.

Thursday: Board the early morning JetBlue direct flight from Orlando that arrives at 9 a.m. Indulge in a pool and beach day at the full-service JW Marriott Cancun Resort & Spa (marriott.com). Try a pre-dinner top-shelf tequila such as Maestro; the rich añejo (aged) goes down smooth, similar to a single malt scotch. Order like the locals: con sangrita (with “little blood”), a chilled blend of tomato juice, lime, orange juice and jalapeno served in a tall shot glass. Enjoy the breezes off the Nichupte Lagoon at the open-air Sasi Thai at CasaMagna Marriott Cancun Resort.
Friday: Go back in time with a day-trip to Chichen Itza (chichenitza.com), plus a swim in a cenote. Return to the 21st century at the Spa at the JW Marriot Cancun. Cheater tip: if you can’t visit Chichen Itza, don’t miss the new Maya Museum located at Km 16 of the Hotel Zone (it’s a 25-minute walk from the JW or hop on one of the public buses that loop up and down the Hotel Zone 24 hours a day). The museum’s modern architecture stands in stark relief to the ancient artifacts it houses, as well as the San Miguelito archaeological site where Mayas lived until 800 years ago. Closed Mondays. 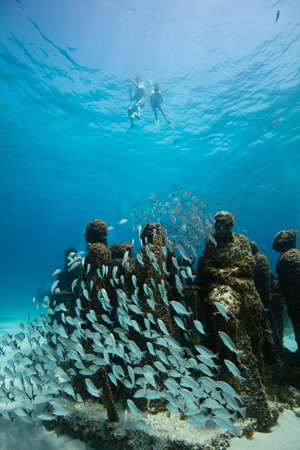 Saturday: Book a morning snorkel or SCUBA with Aqua World (aquaworld.com) to visit the unforgettable Underwater Museum (musacancun.com), a collection of 510 sculptures by British artist Jason de Caires Taylor, sunk to create both an artificial reef and to tell a series of mini-stories. You’ll be back on land by lunchtime. From mid-May to mid-September, the waters off Cancun are one of the only places in the world where you can snorkel with whale sharks. These gentle, filter-feeding sharks (meaning they eat only small things like plankton and fish eggs) are the size of a whale. Join the full-day outing with Solo Buceo (solobuceo.com). Dine at sunset overlooking the lagoon on the deck of La Destileria. Start with the delicious house cocktail, the Tequilibrio, combining tequila with fresh juices and a salted rim. Take the edge off with tableside-prepared guacamole and tequila cheese, served flaming with—what else—tequila.
Sunday: The only direct flight to Orlando is JetBlue’s 10:20 a.m. departure. You’ll be home with time to unpack, take a nap and prepare for the week. Isn’t that what a getaway should be?

This article appears in the January 2014 issue of Orlando Magazine.
Categories: Destinations