Make It A Longer Stay

So appealing is this 26-mile stretch tucked between the Gulf of Mexico and the Choctawhatchee Bay in the center of the Panhandle, that it’s surprising more Floridians haven’t joined the Southerners from Georgia, Alabama, Mississippi and Louisiana in South Walton.

It’s an amazing beach destination, but its sense of sophistication is what really sets it apart. Start on the east end where Scenic Highway 30A connects an 18-mile string of eclectically stylish beach towns. Running parallel is the paved Timpoochee Trail, designed for walking, running and bicycling—a major means of transportation for vacationers who pedal comfy cruisers.

Each town skirts the white sands that form rolling dunes and an immaculate Gulf shore set against translucent blue-green waters. Yet each one of the 12 communities is different—not one emulates another’s palette or style. With only a handful of hotels in South Walton, a vacation rental home is often the way to go and the choices are incredible.

Alys Beach is ultra-hip with its whitewashed Moroccan-influenced architecture. A stop at the Caliza Pool reveals an imposing four-turreted tower and dramatic curtains. The town is home to the annual Digital Graffiti Festival June 4-6, when digitally produced imagery is projected onto the stark masonry walls of the vacation homes. For another side of Alys Beach, join the early risers at Charlie’s Donut Truck, a converted Sunbeam Bread truck where fresh maple-glazed, red velvet and filled donuts are sold.

Seaside may be the most famous community because of its New Urbanism design. Walkable pathways connect houses, divided by white picket fences, to the beach. An amphitheater surrounded by indie boutiques and cafes, like 45 Central, a new wine bar serving Seaside’s own 30A Coastal Dune chardonnay, encourages mingling. A favorite stop with hungry beachgoers is Air Stream Row, a line of iconic silver trailers selling everything from grilled cheese sandwiches to shaved ice.

Another community of note is WaterColor. From its boathouse, you can rent a kayak or paddleboard and make your way across the brackish waters of Western Lake, South Walton’s largest coastal dune lake, to the Gulf.

Vacationers who prefer a more traditional resort setting will love Sandestin on the west end of South Walton. The Gulfside beach is lined with loungers and umbrellas at the Hilton Sandestin, while a short walk east leads to the solitude of Topsail Hill Preserve State Park, where birds nest among 25-foot-tall dunes. Cross U.S. Highway 98 to The Village of Baytowne Wharf, a collection of cottages turned into stores and restaurants along Choctawhatchee Bay.

Rosemary Beach’s newest addition is the cozy-chic Pearl, a boutique hotel where old Europe meets South Beach. Its Swiss chalet architecture contrasts with its cool rooftop pool and lounge. When only a house will do, Sunburst Beach Vacations can find you a rental home on the Gulf, overlooking a dune lake or in the middle of a small-town beach community. 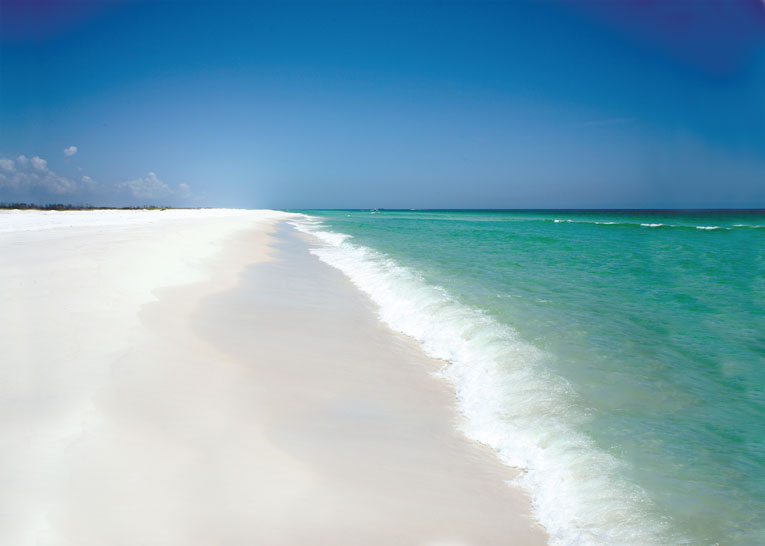 Without a doubt, Pensacola Beach is one of Florida’s most stunning shorelines.

The rainbow-finned sailfish with flashing lights seems to wink at visitors en route to Pensacola Beach. A quirky sign designed in the 1950s, it has become the official beacon guiding folks across the bridge to the coolest retro beach town in the state.

The sliver of land nestled between Santa Rosa Sound and the Gulf of Mexico is home to what tourism officials call the “World’s Whitest Beaches.” This amazing beach, edged with sand dunes that resemble snowdrifts and home to a long, lean fishing pier, has few rivals when it comes to jaw-dropping beauty.

Pensacola Beach is sandwiched between two unspoiled segments of the Gulf Island National Seashore. A drive west takes you past houses perched on stilts followed by miles of sculpted dunes set against an azure backdrop before reaching Fort Pickens. On a self-guided tour of the red brick fortress built in 1834, visitors learn that Geronimo, the prominent Apache war chief, was imprisoned here between 1886 and 1887.

The main road, with its string of old-school beach bars, is worth exploring. A stop at the Sandshaker turns up the Bushwacker, which just happens to be the drink of the day—every day. The local concoction created in 1975 is a mix of white rum, coffee liqueur and crème de cacao with soft-serve ice cream and a Bacardi 151 rum floater on top.

Book at the Margaritaville Beach Resort, where you can loll in a hammock under palm trees at the LandShark Landing Beach Bar while listening to Jimmy Buffett’s music. Rooms have a fresh surf-and-sand décor that complements the Gulf views. 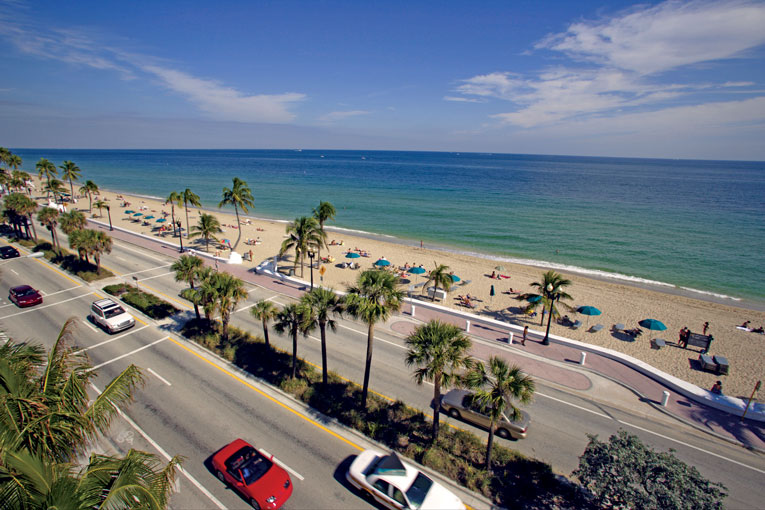 Atlantic Avenue skirts the beach where shops, bars and restaurants are plentiful and cruising the strip is a popular pastime.

No doubt one of the hottest beach strips in Florida, Atlantic Avenue is where folks have been cruising since the 1960s when the movie Visitor info sunny.org put Fort Lauderdale on the map. Walk it, bike it, skate it, drive it—or just hang out on its sands. A white serpentine half-wall slinks along the sand, separating the beach from the pedestrian-friendly walkway. Cross the street and you’ll find bars serving neon-colored frozen drinks, swanky hotels like the W and the Ritz-Carlton and bikini shops chock-full of swimwear. For those who prefer shade to sun-baked sands, the strip is also home to the Bonnet House Museum and Gardens. This historic winter retreat built in 1920 and embellished with artwork by its owner, Frederic Clay Bartlett, is drenched in jungle-like foliage. It’s an unexpected delight.

Hugh Taylor Birch State Park, a swath of preserved tropical hammock sandwiched between Atlantic Avenue and the Intracoastal Waterway, is another attraction. From the park, a tunnel travels under the road to the beachfront, providing a path for bicyclists and Segway riders. M. Cruz Bicycle Rentals & Segway Tours offers a 30-minute Segway tour that traverses the on- and off-road trails in the park.

Taking in the scene from the water on a paddleboard is another option. Fort Lauderdale Stand Up Paddle takes all levels out on the ocean for sunrise tours. When the ocean’s too rough, there’s the Intracoastal Waterway and the chance to navigate Fort Lauderdale’s abundance of canals, passing by some of the area’s blockbuster homes and the yachts docked in front of them.

If diving is more your thing, you’ve hit the jackpot. Off Fort Lauderdale’s coast is a natural three-tiered reef system that begins in 20 feet of water, just 100 yards from shore at its closest point. Making the destination even more diver-friendly are 75 artificial reefs that serve as magnets for fish and marine life. Dive charters depart from the Hilton Fort Lauderdale Marina. 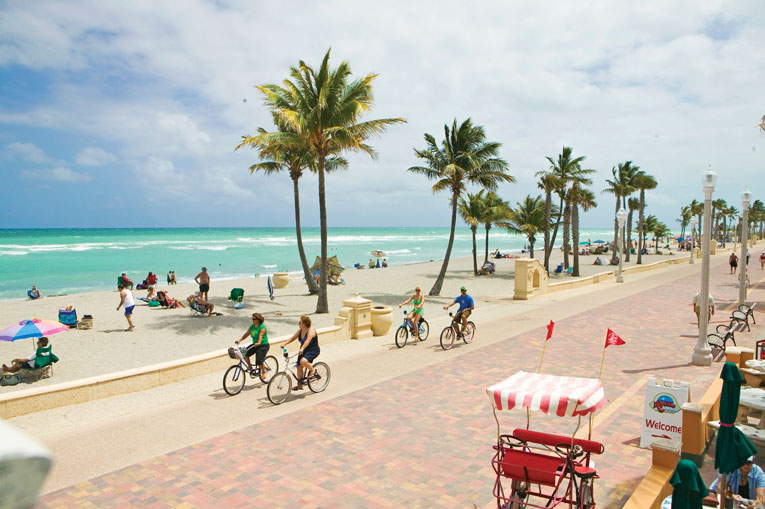 Hollywood Broadwalk runs along the Atlantic coast in Hollywood Beach where pedestrians and bicyclists enjoy the path and alfresco cafés line the other side.

Back in 2007, Hollywood Beach, tucked between Fort Lauderdale and Miami Beach, unveiled its 2.5-mile Broadwalk, kicking off a renaissance that continues to evolve. This retro beach town, which dates back to the 1920s, was the little sister to its more popular neighbors. But that is hardly the case now. Come on a cloudless, blue-sky Sunday, and you’ll be lucky to get a parking space. Hollywood Beach really rocks.

The addition of the paved path, which butts up against the sand and is lined with vintage beach cafes, bars and pizzerias, was like a bolt of lightning to Hollywood’s image. Mom-and-pop places like Little Venice and Jake’s on the Beach, where locals have been eating and drinking for years, are now packed more than ever. From the first rays of dawn to the midnight moon, people walk, jog or linger at alfresco tables taking in the scene. Early risers find breakfast specials, and twin-seat surrey bikes are as much the norm here as double-scoop rainbow cones.

During high season—November to April—Canadian vacationers, who for decades have fancied Hollywood as a winter getaway, join residents from nearby high-rises. Almost every night, a toe-tapping crowd of all ages boogies under the stars to the music at the Hollywood Beach Theatre, a bandshell of sorts on the Broadwalk at Johnson Street.

For something retro, book a one-bedroom suite, kitchen included, at the family-owned Atlantic Sands, where a beachy home-like ambience has kept this boutique property in business for 45 years. If living large is more you, stay at the Diplomat Resort & Spa Hollywood, famous for its two-level double pool with a circular see-through feature. Cross the street and you’re at the Diplomat Landing Marina on the Intracoastal Waterway, the departure point for boating and fishing adventures.

This article appears in the June 2015 issue of Orlando Magazine.
Categories: Local Getaways